There aren't a lot of really great Chromebooks out there, but Samsung's recent Chromebook Pro and Plus come close. Excepting the keyboards, each is one of the best devices in its class to have come out in the last year. And, in what looks like some early Black Friday preparation, retailers such as Amazon, B&H, Frys, Best Buy, and even Samsung itself have marked down prices for each. Right now you can pick up the Chromebook Plus for just $349, and the Chromebook Pro for $449.

That's an all-time low for both (excluding a single pricing error Amazon had back in September for the Chromebook Plus). 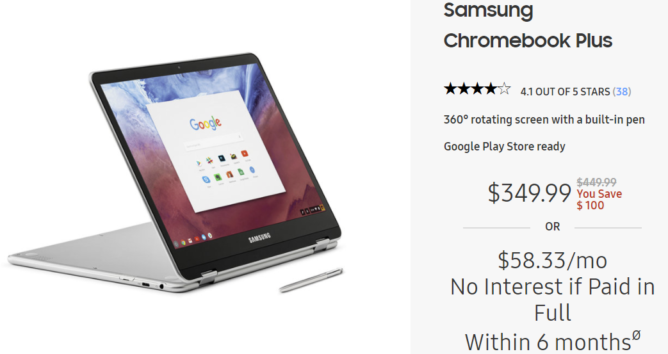 We never reviewed either of these here at Android Police, but I purchased and subsequently returned a Chromebook Plus the week after they launched. The two models have a lot in common, so I can attest to the overall quality of each. The screen is, bar none, one of the nicest I've ever seen on a laptop, and performance on even the ARM-powered Chromebook Plus was pretty decent, though my workflow was a bit too much for it. Both it and the Intel-powered Pro model support Android apps, and they should work pretty well (though there are still some bugs).

The only significant disadvantage the Chromebook Plus and Pro share is a mediocre keyboard with poor key travel and no backlighting. At the launch prices that might have been a hiccup, but for $100 less, potentially minor issues like that are much more palatable.

There are three total SKUs available (including an infrequently seen 64GB Pro model), and most are available at multiple retailers, so for ease of navigation I've put them together into a list just below. Wherever you grab it, though, the price should be about the same, so you can choose whatever retailer is most convenient.

Personally, I think the Plus at $349 is the better deal, but only if you plan on using it for light-duty work like brief spats of writing or content consumption. The more powerful Intel Core M3 in the Chromebook Pro might be a better choice if you need something with a bit more oomph.