Calling PLUS is still relatively new for Sprint devices, with only a handful of devices currently supporting it. But with its latest update, the Sprint Galaxy Note8 has joined the Calling PLUS ranks, following the LG G6 and Galaxy S8/S8+. Also included are October security patches and a couple of other small fixes/upgrades. 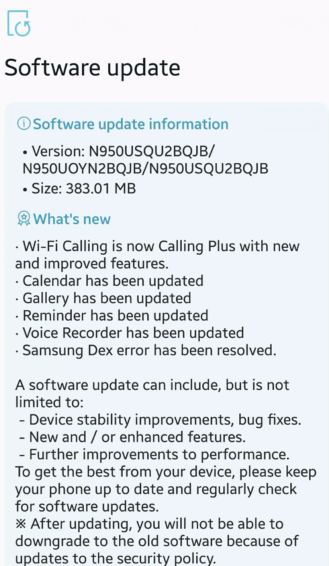 The official changelog is rather sparse. It merely says: "Includes the latest Google security patches, adds Calling Plus, and includes RSSI updates." The update prompt on the phone itself, however, goes into a lot more detail, and thanks to XDA user Bachatu, we've got a screenshot. In case you're not sure what Calling PLUS is, it's a VoIP solution that combines WiFi calling with the ability to use data when you're in a call. Several Samsung apps have been updated, and a problem with DeX has reportedly been resolved.

N950USQU2BQJB is this update's build number, and it looks to weigh in at just a hair over 383MB. It began rolling out on November 15th. If you haven't yet received it, be sure to head to settings and manually check.