The Pixel Buds mark Google's first foray into personal wireless audio. I won't make you wait: it's not gone well.

The Pixel Buds are tethered-style wireless earbuds, with a fabric cable that connects each earbud and sits behind your neck. The buds themselves rest on your ear, with fitment adjusted by a small fabric loop that you pull out or push in on each bud. The design is non-sealing, meaning the Pixel Buds don't actually touch your ear canal at all, which theoretically means they should be pretty comfy. They aren't. 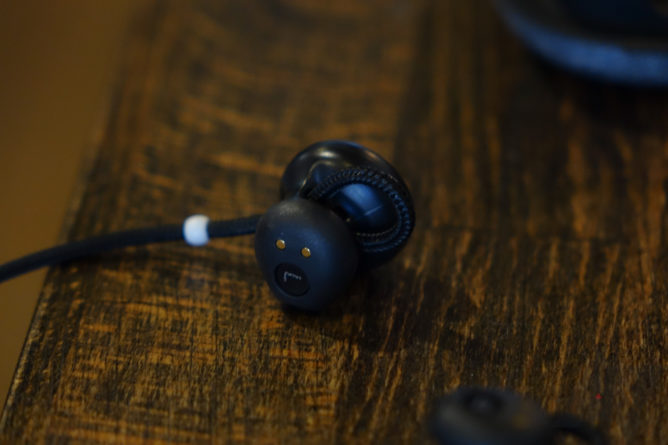 Google's fabric ear loop design isn't the most uncomfortable retainer mechanism I've used, but it is definitely not my favorite, either. After more than 30 minutes wearing them, I was generally ready to remove the Pixel Buds to give my ears a break. By comparison, I can make it a full hour with the Bose SoundSport Free before I even have the slightest bit of discomfort. Then there's the cable: the Pixel Buds' fabric cable is kind of stiff, so you definitely notice when it's tugging or gets twisted up. It's also kind of itchy against the back of my neck, which drives me a little nuts. After using several pairs of truly wireless earbuds, I'm just not into the cable thing anymore, and while I understand some people prefer it, the cable on the Pixel Buds consistently annoyed me - more than that on the Jaybird X3s or standard Bose SoundSport Wireless. 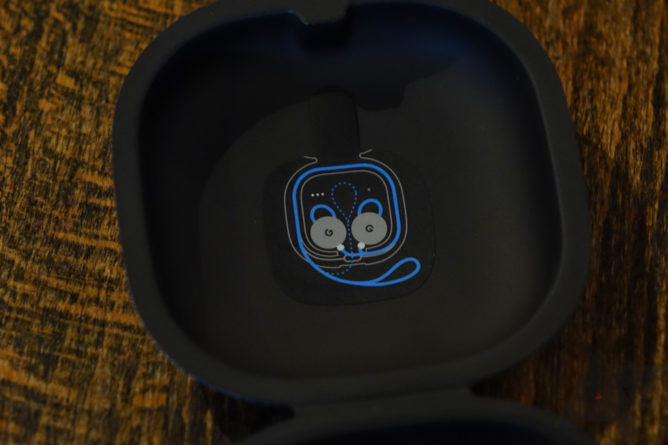 This diagram will probably not be very helpful to most people, I'm guessing.

Then there's the charging case. The charging case is one of the most frustrating, badly-designed products I've seen in a while, and I'm sure if you've read other Pixel Bud reviews, you'll realize I'm not alone in my complaints about it. First off, it's a real pain in the ass to open and close, because there's nowhere you can really get a good grip on an edge. It is held shut by a pretty wimpy magnet, wimpy enough that I'd be concerned, were you to drop the case, the Pixel Buds might go flying out of it. At least that cord will make them hard to lose.

Putting the Pixel Buds in the case is a bear too - Google actually provided reviewers an animated GIF to show the proper way to insert them and wrap the cable around the inside of the case, which is necessary in order to actually, you know, close it. Even after figuring out how to do this, I hate putting the Pixel Buds in the case just because it's a process. You have to seat them on the contacts (which is way harder than it should be!), grab the cable, carefully loop it around the inside edge of the case, and then insert the remaining slack between the two earbuds themselves in the center. All of this could have been avoided with a true wireless design. 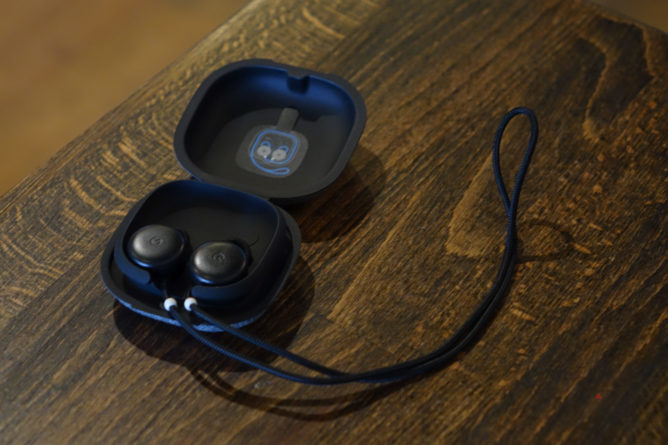 The one design sweet spot on the Pixel Buds is the touch controls - they work great. Swipe forward on the right earbud to raise the volume, swipe back to lower it. Dead simple, and it works extremely reliably. Tap to play or pause is not such a hit with me - sometimes I'll accidentally touch the earbud when I go to reposition it and my music will stop, but at least you know it's pretty sensitive. You tap and hold for the Assistant, but that only works on Marshmallow and above Android phones. I also noticed that tapping for play/pause didn't work on my Chromebook, but volume controls did.

Unfortunately, the Assistant on Chrome OS doesn't yet integrate with Assistant-enabled headphones, but Google says this functionality should eventually come to the operating system. When is anybody's guess.

There are also the controls the Pixel Buds lack: power off and pairing mode. There is no way to force the Pixel Buds off from the headphones themselves. The only way to power them down is to put them in the charging case. Similarly, the only way to get them in pairing mode is to put them in the case and then hold the small button inside the case itself. So, if you take your Pixel Buds somewhere without the case - a bad idea as the battery life is estimated at just 5 hours, meaning more like 3-4 hours realistically - you can't pair them with a new device.

Non-sealing designs like the Pixel Buds have significant audio drawbacks. For one, bass usually is pretty weak, and that's definitely the case here. The Pixel Buds do get very loud, which tends to be necessary on non-sealing earbuds in order to drown out ambient noise more effectively. I would describe the audio quality of the Pixel Buds as similar to the Jaybird X3s (minus the bass), but definitely not as good as the Bose SoundSport Wireless or Free (both of which have great bass response for non-sealing earbuds). 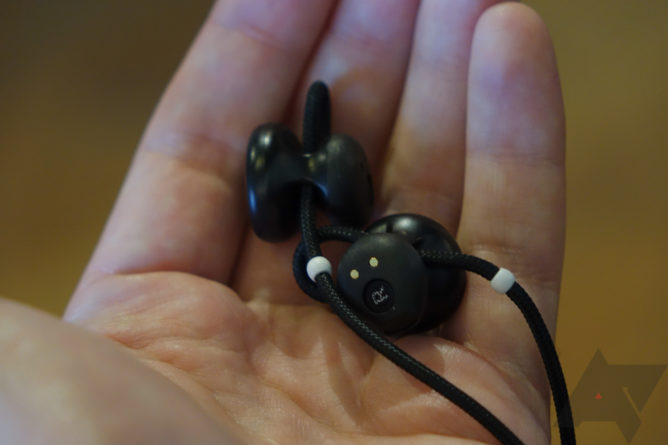 The Pixel Buds sound pretty ok, and I've read some reviewers claim that they're a notch or two above Apple's Airpods in that regard. As someone who does like headphones that sound good, I find myself a little let down by most Bluetooth earbuds here. The Pixel Buds don't have any glaring audio deficiencies, but they're definitely a little... dead. There isn't much dynamic range, soundstage is narrow, bass is minimal, and highs are muted. They're very mid-forward, and make music sound quite flat and one-dimensional. Google may not have wanted to tune the sound signature too aggressively, but with Bluetooth earbuds, I tend to prefer a more shaped quality to the audio. A more aggressive tuning can mask some of the deficiencies of wireless audio, and the limitations of the headphone design itself.

I'd say that all things considered, there's nothing to love about the Pixel Buds from an audio perspective. They're fine, but given the price, I was hoping for a bit better than "fine."

Like the Bose QC35 II, Google's Pixel Buds have the Assistant built into them. This requires an Android device with Marshmallow or higher, and it works pretty great. Just tap and hold on the right earbud and immediately begin speaking - there's no delay or secondary beep you need to wait for. That's the big benefit with Assistant-enabled headphones.

Responses are served up audio-only, meaning your phone won't wake up and display stuff, another advantage over traditional Bluetooth headphones. The Assistant can read you your notifications, too, including things like messages, letting you know which app sent the notification, who the sender is, and the text of the message itself. This stuff can be handy, but if you get a lot of notifications, it can also get really annoying, really fast. If the Assistant notices you aren't acting on repeated notifications from a particular app, it'll mute notifications for that app for the next hour. 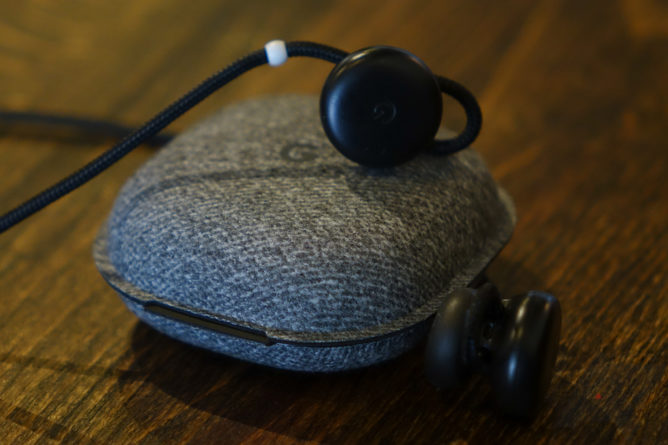 I'd love more granular control over how notifications are handled through Assistant-enabled headphones, but I feel like Google wants this to "just work" in a way that it doesn't quite just yet. As it gathers more data and learns more about user preferences, I have a feeling we'll see (rather, hear) the notification experience on Assistant headphones evolve and change considerably over time. Right now, it's a good idea, but it does have some rough edges.

Many reviews of the Pixel Buds will likely provide some real hands-on experience with the translate feature. This won't be one of them. I have no use for this feature, nor have good opportunities arisen to test it. I suspect most people who buy the Pixel Buds will find it's not quite what they were hoping for. Let me explain.

To activate the translate mode, you hold the right earbud and ask Google to be your translator. It'll then ask you what language you want to translate, and tell you to unlock your phone. The Translate app will open, and then you'll need to hand your phone (yes, your phone) to the person you need to translate. At that point, the conversation mode in the Translate app will take whatever you say whenever you're holding down the right earbud and translate it into the other language (displaying on the screen and played through the phone's speaker). 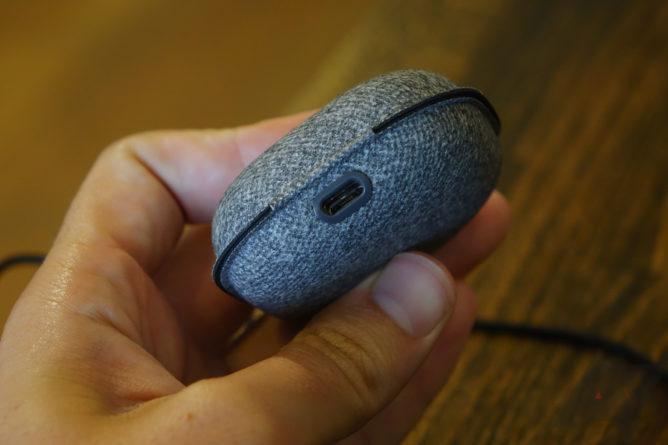 The other person can respond by tapping and holding the microphone button on the app, and the translated audio will come through on your Pixel Buds. The thing here that I think will be a non-starter for many people is the whole handing your phone to somebody else part. I just don't see that being something a lot of us will be willing to do, and the process of explaining to the other person how this system works (the Translate app does offer a brief tutorial in the language you ask it to translate) just seems a little clumsy. I like the idea of working toward a universal translator - it's super awesome. But I wouldn't buy the Pixel Buds for this. You can do basically the same thing using conversation mode on the Translate app now, the Pixel Buds just try to take the concept to more of an audio-first approach.

I tried using it just to get a sense of the user flow, and I found the process quite clumsy. Half the time, the Translate app would launch in the proper conversation mode, but it wouldn't listen to anything I then asked it to translate. When it did, there was a much greater amount of input lag than when I'd normally converse with the Assistant, and the quality of the voice recognition seemed a fair bit poorer than I'm used to from Google.

As to the fast pairing feature using Google's Nearby API, it's there and it works. Your Android phone should get a notification when the Pixel Buds are in pairing mode in their charging case.

I'm pretty disappointed with the Pixel Buds, because they do so little to actually make the wireless headphone experience better. Sure, the Assistant integration is cool, but we'll be getting other headphones with that functionality soon, so buying the Pixel Buds just for that seems kind of silly. Quick pairing is nice when it works, but again, other headphones are getting (or already have) this.

They also don't sound especially great, they aren't very comfortable, the charging case design is terrible, battery life is unremarkable, and it's clear that fully wireless earbuds are the way forward - not fabric cables. Picking up the Pixel Buds instead of Airpods for the same money seems crazy to me. And if you don't want Airpods or fully wireless earbuds, Jaybird's excellent X3s offer much better battery life and a more comfortable fit at a far lower price.

Meanwhile, at the other end of the spectrum, companies like Bose are beating Google on features and audio. My SoundSport Free are fully wireless (and last just as long), sound leagues better, and are more comfortable, to boot. Sure, they cost $250, but I'm clearly getting something out of that extra money. It remains wholly unclear to me why I'd spend $160 on the Pixel Buds.

The Pixel Buds need to go back to the drawing board, sadly. I feel like we ended up with them not because Google genuinely thought they were a compelling product, but because the Pixel 2s don't have a headphone jack and Google needed something to go up against the Airpods. That's kind of a bummer. 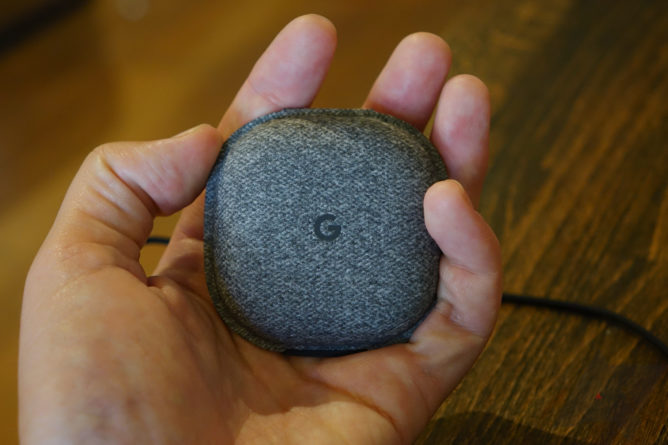