A new version of Play Music is available this afternoon and it's making a big leap in versions from 8.0 to 8.5. This update doesn't come with the redesign that had seemed likely after last month's visual refresh to Play Music on Android TV. But cosmetic touchups were in the cards as the adaptive icons for app shortcuts were fixed in this release. Additionally, Play Music lost some megabytes after unbundling its Wear app. 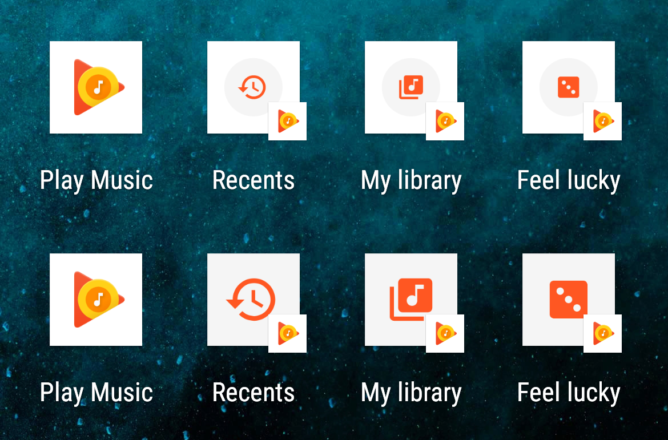 The Play Music app has some of the more useful app shortcuts out there. Instead of opening up the main landing page with recommendations, you can launch directly to your library or recents with a single tap. But if you're on Android Oreo, the adaptive icons were microscopic and had a weird halo look due to leftover round assets. Play Music v8.5 fixes this issue with properly sized icons and backgrounds that won't look quite so two-tone.

Back in the early days of Android Wear, companion apps were distributed as part of the APKs intended for phones. This design proved to be problematic and with Wear 2.0 the model was switched so watch apps were distributed independently through the Play Store. Unfortunately, supporting older watches meant developers still had to bundle microAPKs. Fast forward to a few weeks ago when Google announced that a new model had been developed for Wear 1.0 that made it possible to finally unbundle those pesky little apps.

And that leads us to today's update of Play Music... It got smaller. In fact, it dropped about 13% of its total weight, or a little over 2 MB. It accomplished this by simply removing the Wear microAPK that was hanging around to support watches that would never get upgrades to 2.0.

If you have an older watch running Wear 1.5, don't worry, you shouldn't even notice a change. Apps for your watch are automatically downloaded from the Play Store and installed to the watch in a fairly transparent way, so the experience is the same.