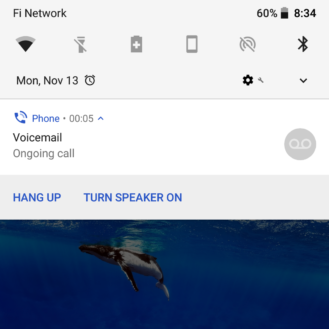 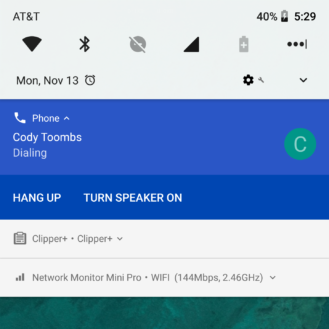 There weren't any other new features spotted in this update yet, but the video camera icons in the call log recently switched back to phone icons. A few other people have seen this happen, but others have not, so we're not really sure if it was switched back remotely or if there was just a bug. However, after installing v14 of the Phone app, the video camera icons have been restored. I suspect it will be permanent this time.

Fixing phone numbers for international use

In a recent teardown of the Contacts app, new text suggested the app would "fix" phone numbers if it detected a change to the system it was connected to. A similar feature is going to appear in the Phone app. It's called Assisted Dialing and it promises to automatically correct the prefix for international numbers. If you're traveling or calling outside of the country, this may save a bit of time and probably some confusion.

Assisted dialing will have its own dedicated settings screen, which means there are probably more features like this planned for the future. It's just a single toggle that will be enabled by default. It looks like you'll be able to see if a phone number has been corrected because the calling screen will show the number it's actually dialing, followed by what will probably be the original number in parenthesis.

Late last year, Google added support for Verizon's Visual Voicemail (VVM) service to the Google Phone app. Depending on your carrier, you can usually get visual voicemail in some form or another, but you may not get transcripts. Judging by some new lines of text, Google may begin supporting more carriers by offering to transcribe voicemails using its own speech recognition service.

There's no reference to Google Voice, which is what leads me to think Google will access your carrier's voicemail rather than push users to join Google Voice. If the Phone app can already show visual voicemail and download the call audio (which was necessary for sharing), it makes plenty of sense for Google to also pass the audio through its transcription service. I had even suggested Google may be doing something similar to this for backing up voicemail, so the transcription is a very simple, very obvious next step.

<string name="dialer_terms_and_conditions_1.0">See and listen to your messages, without having to call voicemail. Transcripts of your voicemail are provided by Google’s free transcription service. %s</string>

It wasn't until the Android One program began that Google become responsible for supporting dual-SIM phones. Prior to that, all of the Nexus phones supported only one card. Evidently, support wasn't really up to snuff yet, and there is now some effort to improve the experience for those with multiple SIM cards.

The new strings only relate to changing which SIM is used for making a call and showing which one is receiving a call. Since I don't have a dual-SIM phone, I can't test if either of these are actually working yet, but I have a feeling we will hear about it soon.

Broadcast for Google Home is rolling out now, allowing you to talk to everyone in the house

[Update: Winners] Giveaway: Win one of 30 packs of USB C-to-A cables from BrexLink [US]