According to a new Amazon listing, it looks like Misfit's Vapor Android Wear smartwatch might actually exist soon. Even better, you can buy one now over at Amazon in both Black and Gold/Pink for just a bit over $151. It's "temporarily out of stock," but you can place an order.

The Vapor is supposed to cost $200 when it launches later this October, so we aren't sure if this is a mistake with the listing or an actual reduction in price. Either way, I'd recommend acting very fast if you're interested.

In summary, the Misfit Vapor is an Android Wear 2.0 smartwatch with great specs — like a round AMOLED display, heart rate sensor, 50m water resistance, and a 2-day battery — for a slightly incredible price. So incredible, in fact, that after the specs were modified and the watch was delayed, we were starting to think the Vapor was turning into vaporware.

Of course, this isn't conclusive proof that the smartwatch will ever actually exist, but it does raise our confidence. And if for any reason the Misfit Vapor doesn't manifest, Amazon is a reputable retailer so I wouldn't worry about losing any cash.

If you want to grab what looks (on paper) to be a good Android Wear device at a great price, then hurry. I just ordered one, myself. There's no estimated delivery date yet, so there could be some wait. 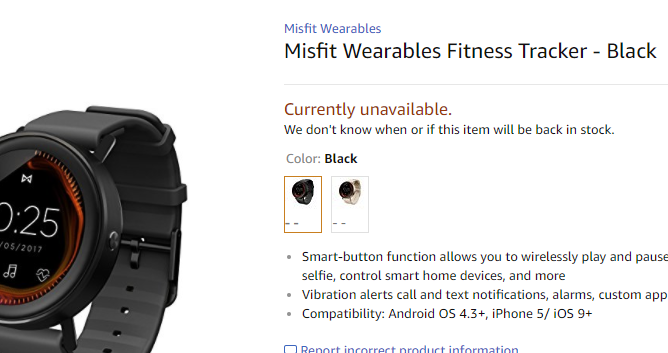 Party's over. Either Amazon or Misfit wised up, and it's now listed as "currently unavailable" at Amazon. Fortunately, it doesn't look like Amazon has canceled any of the existing pre-orders yet. In fact, if you happened to pre-order it, there's a listed release date of October 23rd in the "your orders" section, though there is no delivery estimate as of yet.

If you ordered a Misfit Vapor from Amazon, you'll have to wait a while longer. The company confirmed on Twitter that the orders will be fulfilled, but they aren't shipping the watches to Amazon until December:

We will be shipping Vapors to Amazon in December. However, we cannot confirm when exactly they will be able to fulfill your order.