Google announced a lot of things at its October 4th event including the new Pixels and the Pixelbook. However, the Pixel Buds sort of stole the show with that rad universal translator demo. These babies don't come cheap, but those who dropped the requisite $159 will be happy to know orders have started going out.

Unlike a lot of other companies, Google opted to make its new Bluetooth headphones a single unit—the buds are connected via a cable. Apple, Jaybird, Samsung, and others are on this completely wireless kick now. The Pixel Buds might be a bit more reliable and harder to lose, but the cable could be restrictive. The right earbud has a touch-sensitive button that brings up Google Translate, but that only works on Pixels for now. They'll work as Bluetooth headphones with any device, though. 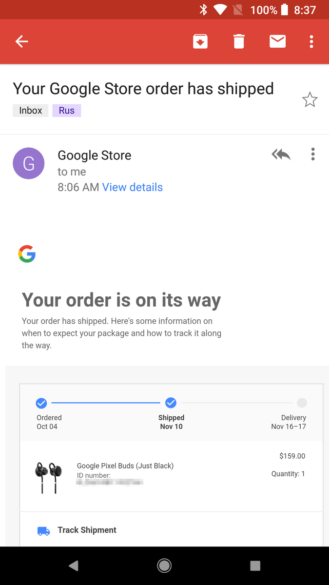 While pre-orders have started shipping, the current wait shown on the Google Store is 5-6 weeks. So, if you don't already have an order in, it might be a while.

Google's rebuilding its Street View panoramas to look better, and here's how