Motorola's acquisition by Lenovo has been a mixed bag, at the very least. While the company still makes some of the best budget phones around (like the G5 Plus), it has largely stopped delivering speedy Android updates, and its product lineup gets more confusing by the month. Despite those problems, Motorola is still doing just fine in the United States, and even doubled its market share compared to this time last year. 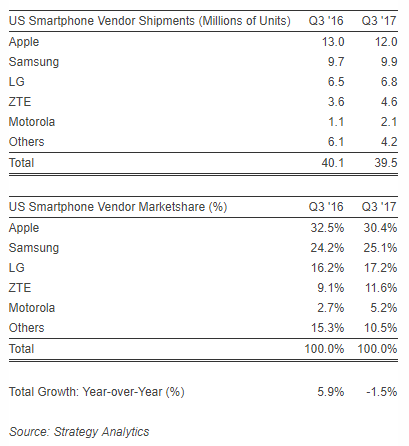 In the US, Motorola placed fifth regarding phones shipped and overall marketshare. In both categories, Apple was first, followed by Samsung, LG and ZTE. This is the first time Motorola has been in the top five since 2015.

BOSTON--(BUSINESS WIRE)--According to the latest research from Strategy Analytics, United States smartphone shipments fell 2 percent annually to reach 40 million units in the third quarter of 2017. Motorola was the star performer, almost doubling its smartphone shipments from a year ago and capturing 5 percent marketshare.

Neil Mawston, Executive Director at Strategy Analytics, added, “We estimate Apple shipped 12.0 million iPhones for 30 percent marketshare in the US in Q3 2017, dipping from 13.0 million units and 32 percent share in Q3 2016. Demand for the new iPhone 8 portfolio was mixed, while some Apple fans delayed purchases in anticipation of the later introduction of iPhone X. Samsung shipped 9.9 million smartphones for 25 percent share in the US in Q3 2017, up slightly from 24 percent a year ago. Samsung’s flagship Galaxy S8 performed relatively well in the high-tier, while its A5 model and others are popular in the mid-tier.”

Linda Sui, Director at Strategy Analytics, added, “LG maintained third position with 17 percent US smartphone marketshare in Q3 2017, inching up from 16 percent during Q3 2016. LG has expanded its retail presence at major operators this year, like Sprint and AT&T, and this is helping LG to stay one step ahead of ambitious new rivals such as ZTE.”

Ken Hyers, Director at Strategy Analytics, added, “ZTE shipped 4.6 million smartphones and held fourth place with 12 percent marketshare in the US in Q3 2017, up from 9 percent a year ago. ZTE is benefiting from strong demand in the prepaid segment, particularly with operator Tracfone. ZTE has been capturing large chunks of smartphone share from midrange rivals such as TCL-Alcatel and Blu. Motorola almost doubled its smartphone shipments from 1.1 million units in the US in Q3 2016 to 2.1 million in Q3 2017. Motorola took fifth place and captured 5 percent smartphone marketshare in the US during the quarter, returning it to a top-five ranking for the first time since 2015. Motorola’s recovery has been driven by expanded distribution with all top four US carriers, selling popular new models such as Moto Z2 Play.”

Strategy Analytics is a global, independent research and consulting firm. The company is headquartered in Boston, USA, with offices in the UK, France, Germany, Japan, South Korea, Taiwan, India and China. Visit www.strategyanalytics.com for more information.