The Mate 9 is yesterday's news, but it's still a pretty good phone. The price is getting hard to argue with, too. After previously dropping to $499, the Mate 9 is now on sale for $399 at various retailers. This is a limited time offer rather than a permanent price drop. So, don't think it over too long.

Huawei is on the verge of shipping the Mate 10 in several markets. While there's no US release date yet, it's probably not far off. If you don't need to be on the latest and greatest, the Mate 9 is still a respectable phone, especially at the newly reduced price. It has a Kirin 960 SoC, a 5.9-inch 1080p LCD, 64GB of storage, and a 12/20MP dual camera setup. It runs Android 7.0 right now, but there's an Oreo beta test happening. 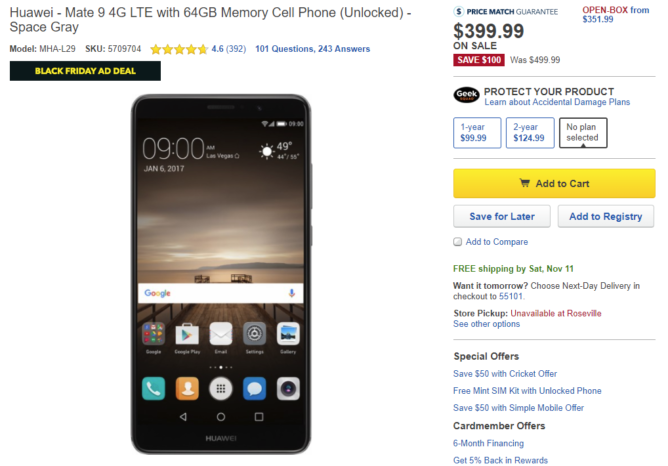 You can pick the Mate 9 up at the lower price from Amazon, B&H, and Best Buy. The phone is GSM/LTE unlocked, so it'll work on AT&T and T-Mobile in the US. B&H is the only retailer that lists the length of the sale, which is set to end at midnight ET on Friday.