Over the past few months, we've received dozens of complaints about redirecting ads on this site, which we have been repeatedly reporting to our ad networks. The problem ultimately comes down to rogue ads being published through common ad networks (even 'safe' ones like AdSense and AdX), which then show up on sites like ours. When the ads load, they hijack the parent page to load a misleading message, like the one pictured above, often while turning on the device's vibration motor to make it seem more realistic.

Most ad networks don't have any kind of manual review process, making this behavior difficult to pinpoint, and the ad's code can even be obfuscated to hide the malicious behavior. Google is now trying something different - blocking the behavior at the browser level. 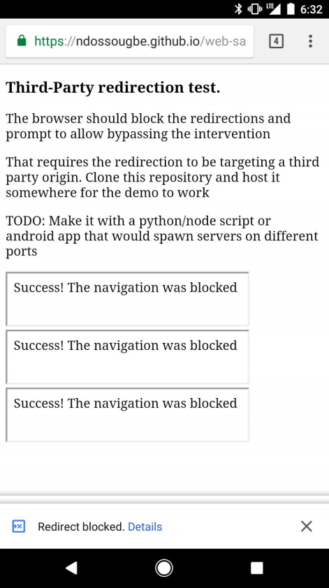 Starting with Chrome 64, which is currently in the Canary and Dev channels, the browser will block all redirects coming from third-party frames, unless the user had been previously interacting with the frame. In other words, unless you tap an area inside the ad, the redirect will be blocked. Instead, Chrome will show an info bar, letting you know that the redirect attempt was disabled.

Google is also working on another change to prevent malicious behavior. Some pages will open links in new tabs, while redirecting the original tab to a malicious page. This essentially circumvents Chrome's built-in popup blocker. With Chrome 65, this behavior will also be blocked, and an info bar will be shown to the user.

These changes, combined with Chrome's upcoming ad blocker, should make the web a much nicer place for the average user. Hopefully, other browsers will follow suit and implement these changes as well. You can see a demo of a redirect here.

This feature is already live in Chrome, even the current stable version (Chrome v62). See this post for more details about how to turn it on.