According to Bloomberg, citing "people familiar with the matter," the deal would propose ~$70 a share in cash and stock for the acquisition. In comparison, Qualcomm's stock at the time of writing is trading at $61.81 per share, up 12.7% since the news broke. 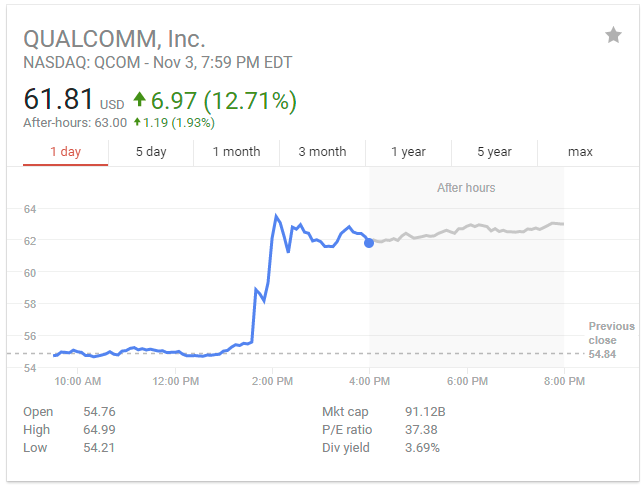 Broadcom's been in an acquiring mood recently. It's a bit complex, but Broadcom itself was purchased back in 2015 by Avago (another chipmaker), and the resulting conglomeration is also called Broadcom. That makes it one of the more prominent chip manufacturers out there and a competitor to Qualcomm.

Bloomberg speculates—and I agree—that US regulators might oppose such an acquisition. Outside the US, with Qualcomm already under investigation for its purchase of NXP, EU regulators may also have some opposition. Broadcom's merger with Brocade has also been postponed pending further study, so Broadcom could face a tough fight if the company is looking for additional acquisitions.

With its ongoing legal dispute with Apple and antitrust investigations in multiple countries, it will be interesting to see how this news and a potential buy-out might affect Qualcomm's fortunes. Personally, I think that such an acquisition probably isn't in the best interests of consumers, but we'll just have to wait and see. An offer may never materialize, and this could be the last we hear of it. There's no schedule set for when Broadcom's bid for Qualcomm might be submitted, and Bloomberg states that a final decision has yet to be reached.

According to a PR released earlier today, Qualcomm has received Broadcom's unsolicited offer to acquire all outstanding shares of Qualcomm for $60 per share, plus $10 per share in Broadcom stock. Qualcomm is consulting its financial and legal advisers before making any decisions and will issue no further comment until the company's board of directors has completed a review.

SAN DIEGO, Nov. 6, 2017 /PRNewswire/ -- Qualcomm Incorporated (NASDAQ: QCOM) ("Qualcomm" or the "company") today confirmed that it has received a non-binding, unsolicited proposal from Broadcom Limited (NASDAQ: AVGO) to acquire all of the outstanding shares of Qualcomm for per share consideration of $60.00 in cash and $10.00 in Broadcom stock.

The Qualcomm Board of Directors, in consultation with its financial and legal advisors, will assess the proposal in order to pursue the course of action that is in the best interests of Qualcomm shareholders. Qualcomm will have no further comment until its Board of Directors has completed its review.

Qualcomm's Board and management have continued to execute on its strategy to position the company for the next phase of profitable growth by making focused investments to extend its leadership in mobile into new opportunities, while maintaining financial discipline and a robust capital return program. Qualcomm has significant opportunities to drive substantial additional value for its shareholders as its technology and product roadmap move into new industries.

About Qualcomm
Qualcomm's technologies powered the smartphone revolution and connected billions of people. We pioneered 3G and 4G – and now we are leading the way to 5G and a new era of intelligent, connected devices. Our products are revolutionizing industries, including automotive, computing, IoT, healthcare and data center, and are allowing millions of devices to connect with each other in ways never before imagined. Qualcomm Incorporated includes our licensing business, QTL, and the vast majority of our patent portfolio.  Qualcomm Technologies, Inc., a subsidiary of Qualcomm Incorporated, operates, along with its subsidiaries, all of our engineering, research and development functions, and all of our products and services businesses, including, our QCT semiconductor business. To learn more, visit Qualcomm's website, blog, Twitter and Facebook pages.