Early last year, Netflix prematurely flipped the switch on a beta channel release for its Android app. Within hours, the company pulled the plug on signups for the beta program. Now, over a year and a half later, it's back. Excited guinea pigs can again sign up to test the latest beta versions of the Netflix app for Android.

Although those who had already signed up last year were able to stay in the program, no subsequent users were able to join. But now the testing program page is, again, open. I'd recommend interested parties jump on quickly, in case this is another mistake by Netflix. 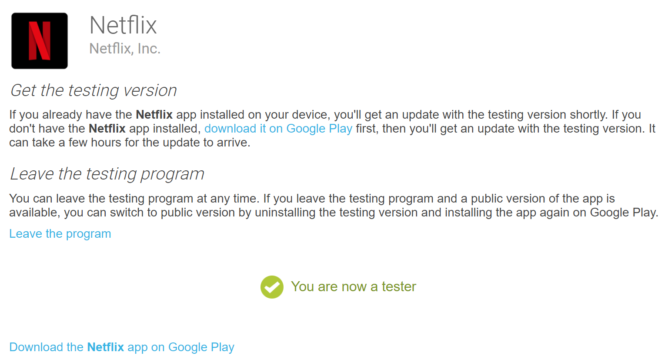 We aren't sure how long the testing program may have been open for. We only just noticed it ourselves via a tip. So while it's probably somewhat recent, we can't pin an exact date on it.

As before, your device's Google Play certification status might prevent you from downloading the beta version of the app. Some have reported that their phones and tablets which should be failing certification are nonetheless showing it, but YMMV. For example, none of my devices with an unlocked bootloader are showing the app, but some of our readers have reported the listing returning on the Play Store when, by all accounts, it shouldn't.

You can sign up for the beta program here, and you should see your listing on Google Play flip over to "Netflix (Beta)" soon after.