As such, the space the U11 Life occupies isn't very competitive in the US - at least in theory. But in practice, a phone at this price competes with discounted, used, and refurbished high-end handsets. To me, that means it has to stand up not just to new phones in its price bracket, but provide a compelling reason to even consider buying a premium midrange phone in the first place.

Unfortunately, like the Moto X4, I just don't see anything about the U11 Life that makes a case. It's a fine phone, but it's unremarkable, and I don't think it's really doing anything to up the competitive ante in an increasingly boring, low-value part of the smartphone market. 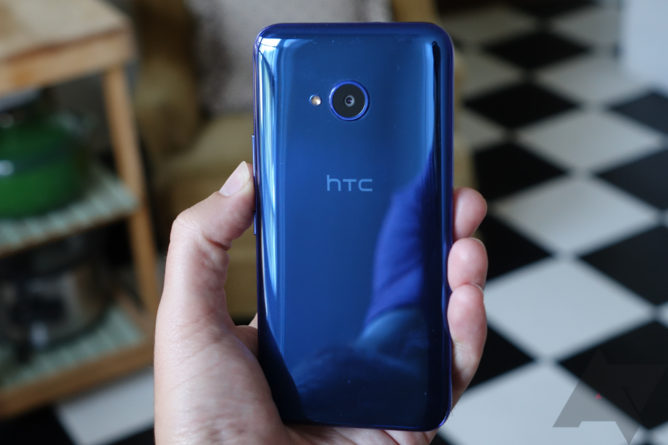 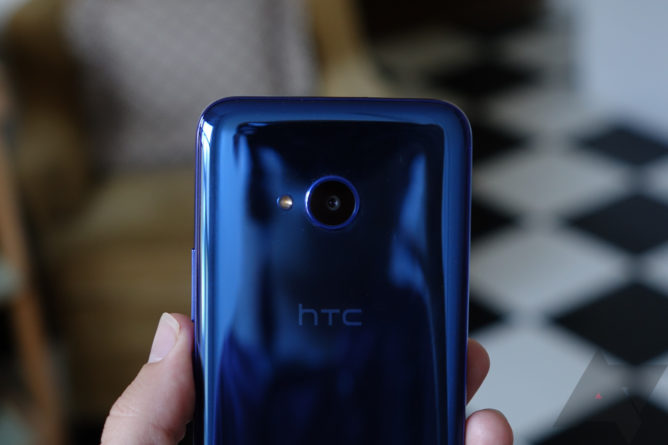 The U11 Life is supposed to mimic the design of its bigger, better sibling, the U11. Aside from the IP67 waterproofing and Edge Sense, this seems like lip service to me.

The back of the phone is not HTC's tricky colored glass from the U11, but rather a colored foil that sits beneath a layer of clear acrylic plastic. Plastic, as you may know, can get a bit scratched up. And that's especially noticeable on really shiny, clear plastic. I haven't put this phone through the ringer, but I haven't babied it, either - just take a look. The Life is an absolute scratch magnet. I'm not opposed to making phones out of plastic inherently, but there's a reason really glossy plastic went out of style, HTC: it looks good - for a month. And then it looks terrible... forever. For $350, I think glass would not have been the most unreasonable request. 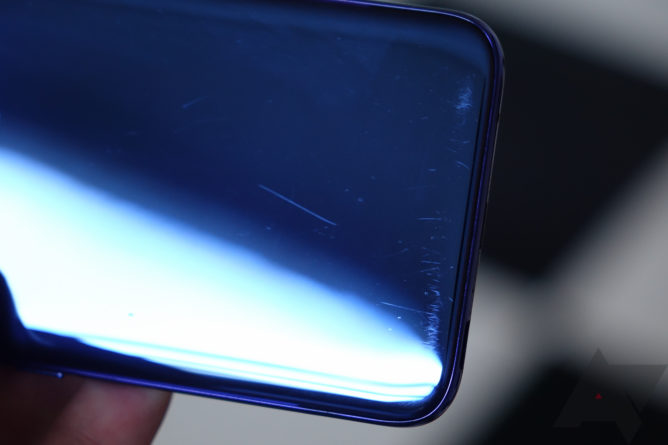 The power and volume buttons are some of the worst I've used in recent memory. The power and volume keys on the $180 Moto E4 Plus I reviewed a while back are much better than those on the U11 Life, which costs twice as much. Then you've got HTC's signature capacitive keys, which I find notable only because they are especially ugly. The U11 Plus, announced alongside the Life, does away with them. This phone should have, too. 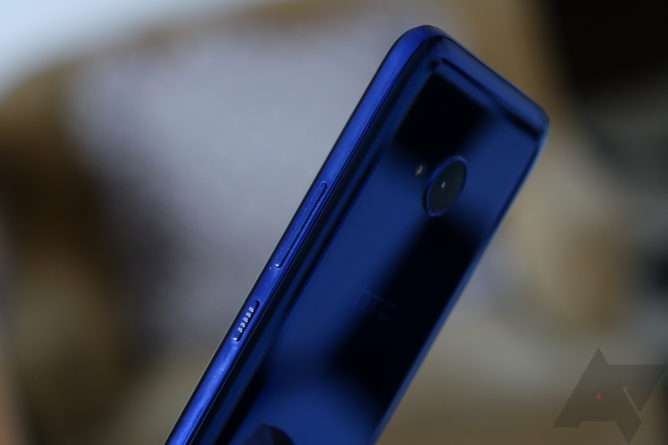 The U11 Life doesn't even pack dual speakers, there's just the one bottom-firing driver. And, as you may have guessed, there is no 3.5mm port. HTC does include a pair of its noise-cancelling U Sonic USB-C earbuds in the box - and they're totally fine! - but I don't think this fully excuses the lack of a jack. On cheaper phones, especially, I think headphone jacks should be expected.

As I said, the Life does have Edge Sense. It works just like it does on the U11, and if you're into that, it could be a handy feature. I do find I accidentally activate it much less often on this smaller phone, since my hand doesn't have to stretch so far to hold it. This did surprise me, as I found Edge Sense to be too much of annoyance to be worthwhile on the U11 (and I felt the same about Google's version on the Pixel 2 XL). I could definitely see myself using it on the Life for Google Assistant, because while the phone does support OK Google hotwording, I tend to find it's less snappy on the pokey Snapdragon 630. Squeezing is more reliable and faster. 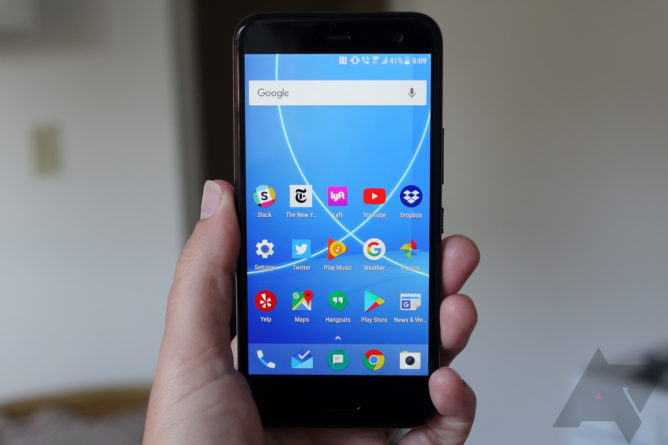 Oh, and there's waterproofing. The Life is rated IP67, which is definitely a big plus for a phone costing $349. Ruggedization has typically been reserved for much pricier handsets, so it's nice to see this trickling down to more affordable hardware.

On the subject of the display, I find the LCD panel HTC chose to be fine. It doesn't get especially bright, but colors are decent and viewing angles are respectable. I've seen far worse screens (insert Pixel 2 XL joke here), and given its price I think the Life's screen is not something anyone's going to complain about. Unless you wear polarized sunglasses. Like every HTC phone, the Life goes totally invisible unless you're looking at it straight on in portrait made when you're wearing shades. This did annoy me.

Finally, the fingerprint scanner. I didn't find it be slow, but it's also far from the quickest one I've used. It's pretty comparable to what you get on phones like the Moto G5 Plus or the Moto X4. It's perfectly decent. 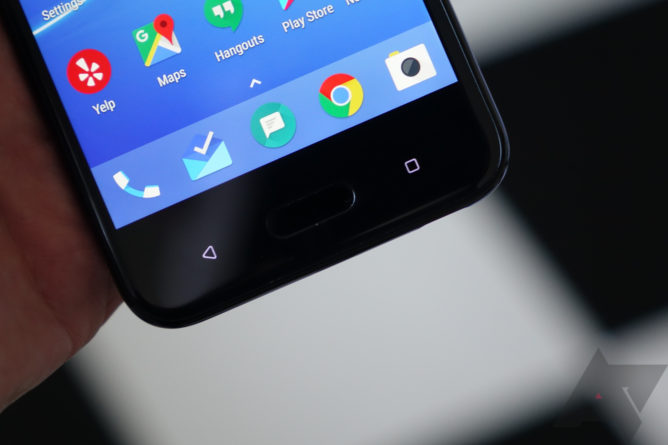 The Life's 16MP rear camera is pretty good for the money. HTC's HDR processing does well in challenging light, and the f/2.0 lens gathers enough light to make shooting in darker conditions feasible. I did find that in particularly low-light environments the processing became quite muddy, but that's par for the course on anything outside the flagship tier.

Overall, I think the camera is one of the most likable aspects of the U11 Life. It's not without downsides, though: launches can be quite slow, and the shutter is similarly unenthusiastic at times. I point the finger squarely at the Snapdragon 630 on this, though - no phone with this chip has a particularly fast camera. 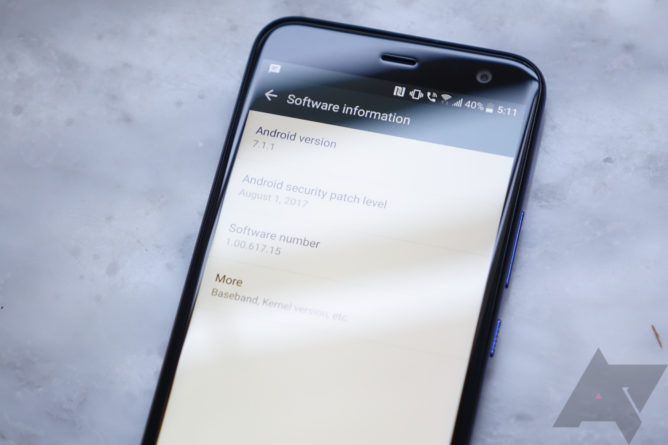 The Snapdragon 630 is an eight-core processor utilizing ARM A53 CPUs. You also get 32GB of internal storage (plus microSD slot) and 3GB of RAM.

The A53 CPU design in the Snapdragon 630 is getting old, and has been in use since early 2014. And even with eight cores, the Snapdragon 61x/2x/30 have never felt like speedy chips. It has a good feature set with support for things like always-on hotwording, Bluetooth 5.0, and a solid X12 LTE modem, but much of Qualcomm's newer 600-series chips opt for the A73-based Kryo cores, which are much more powerful. I'm against paying $400 for a Snapdragon 630 in the Moto X4, and I'm against paying $350 for it here. You can do much better shopping on the used market or even when looking at carrier discounts for last year's high-end phones, and you will end up with far more capable silicon.

In the Life, I find the 630 story to be largely the same as I did in the X4: performance overall is mediocre. HTC seems to have done a decent job optimizing Android, but it feels far from "fast." Knowing I could pay about the same money for a very gently-used Snapdragon 821 in a OnePlus 3T, I find the idea of putting up with the 630 for this price kind of ridiculous. 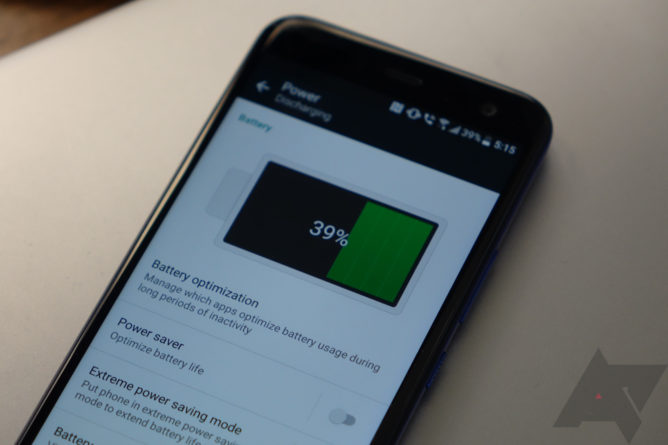 Battery life on the Life has been pretty decent, if not amazing. At just 2600mAh, this phone is hardly set up to be an endurance champion, but the Snapdragon 630 does a good job keeping consumption in check. I found I could easily get four hours of screen time with the U11 Life in a typical day of usage, and that doesn't surprise me. While slow, this chipset is well-known for its power-sipping nature, and the story is no different here. I think light to moderate users should easily see a full day, but more intense usage may require an afternoon or early evening top-up. 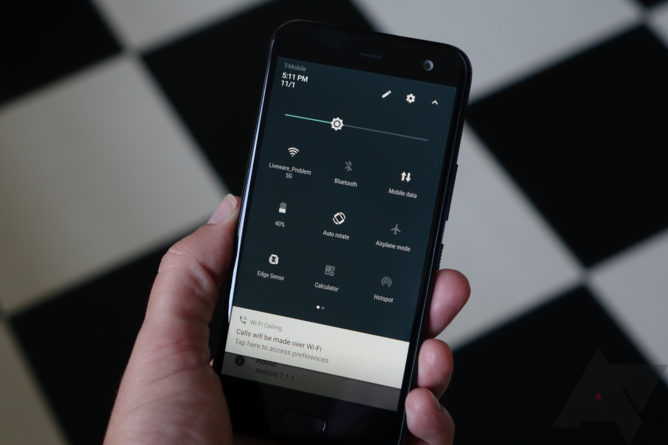 Sense on the U11 Life is largely similar to Sense on the U11. Which is to say, it's mostly a theme these days - Sense's functional changes to Android are quite minimal. As mentioned, there's Edge Sense, plus HTC's small changes like motion gestures (double tap to wake, for example) and a theme store. Other than that? It's Android 7.1.1.

HTC says the U11 Life will get Oreo before November is over in the US, which is a pretty respectable turnaround. If they can make good on that promise, the U11 Life will have its appeal upped a bit in my mind, as many phones from 2016 don't have Oreo. That's a competitive advantage. Still, I'm wary of hinging on HTC's word here, even if I do have faith the Life will get Oreo, and probably well before the year is out. 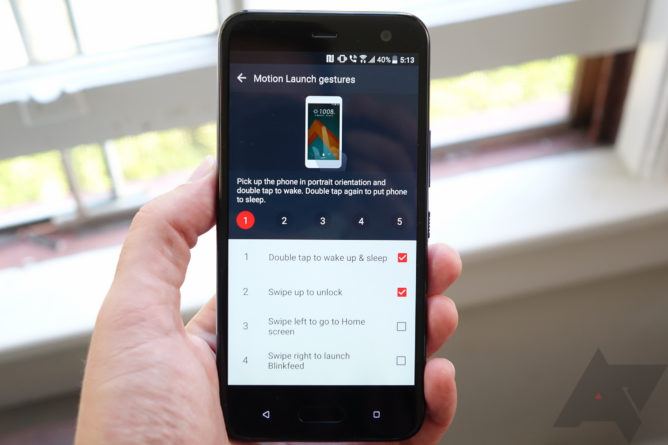 What I don't have is the Android One version of the phone, but here's the thing: that's shipping with Nougat, too. So why is the US the only country getting a Sense U11 Life? HTC tried to explain this to me as being about carrier features. According to HTC, implementing things like Wi-Fi calling on T-Mobile would have been far too difficult on an Android One ROM while still launching the Life this year.

This suggests to me that the decision to launch the Life as an Android One phone may have come fairly late in the game. After all, why develop two different ROMs for the same phone? That seems like a pretty silly way to allocate your development resources.

But that's what HTC chose to do, and that's the explanation they've provided.

While not as stock in "feel" as, say, Motorola's skin, I think HTC Sense is easily a close second to Moto in this regard. Sense is nowhere near as invasive as TouchWiz or even LG's relatively light skin, and that's generally a good thing. 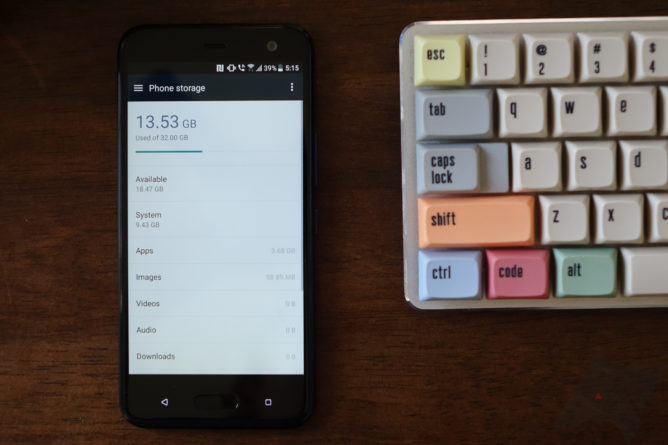 Even if the U11 Life were to ship with Oreo out of the box, I have a tough time recommending it at $349. The same goes for the Android One variant. T-Mobile will be selling the Life for less, but that version will be carrier locked, and unless it's well under $300, I probably wouldn't suggest that option, either.

The U11 Life is remarkably unremarkable, and it doesn't give me any real insight as to why I'd choose to spend well over $100 more than I might on a perfectly competent Moto G5 Plus, a phone with the same processor and amount of storage. Or why I just wouldn't buy a slightly older but much better smartphone for a similar price. There's waterproofing, yes - that's not nothing (whether Edge Sense provides any real value is, to me, questionable). But when there's really very little about the Life as a complete package that makes it compelling, no one or two features are going to be its salvation.

The U11 Life isn't bad, really. As phones go, it's totally fine. But fine really doesn't cut it here. And for a phone that is purportedly aimed at a value-conscious consumer, it's hard for me call the Life especially good for the money. If anything, it's a bit overpriced. The Moto X4 is $50 more, yes, but it brings full metal and glass construction, dual cameras, a larger battery, four-carrier network support, similar waterproofing, and a damn headphone jack. I don't think the X4 is especially great for $400, but even being cheaper, the U11 Life seems the worse bargain overall if you're asking me.

And considering a real U11 in decent shape goes for about $450 on Swappa, I think consumers who really care about value probably aren't looking at a phone like this in the first place. 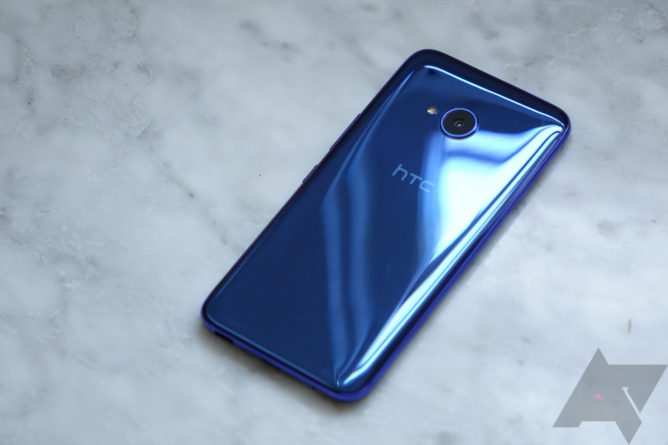 [Update: It's official] Samsung starts rolling out Oreo beta for the Galaxy S8 and S8 Plus

HTC U11+ hands-on: HTC steps into the modern smartphone era