Message recalls have been rumored on WhatsApp for months now and every couple of weeks, we got a glimpse of the functionality in a beta version but it was always a false alert and never properly worked. Now the option appears to be going live, with a slow rollout to more and more users.

Message deletion for all, i.e. message recalls, lets you remove a message you sent from a conversation and it won't just disappear from your end, it'll also go away on the recipient(s)'s phone. That can be handy if you sent something to someone by mistake, you made a typo, or you regretted saying something, and so on. I'm sure you're smart enough to figure out other uses for this, cough cough.

However, there are three caveats that go with this. One is that you can only delete messages 7 minutes after sending them, so if you miss that short window, there's no way to recall the message. Two is that if someone already opened and read the message, your deletion will only affect their ability to take a screenshot or search for its content later: they already saw it and that's the end of it. Three is that you won't be notified if message recalling worked on the recipient(s)'s end, so you can't be sure if the deletion happened successfully or not.

I've tested this on WhatsApp Beta v2.17.399 (APK link) and it's working for me, but even though Artem is running the same version, it's not showing up for him yet. So it seems like it's still rolling out to users and hasn't been turned on for everyone just yet. 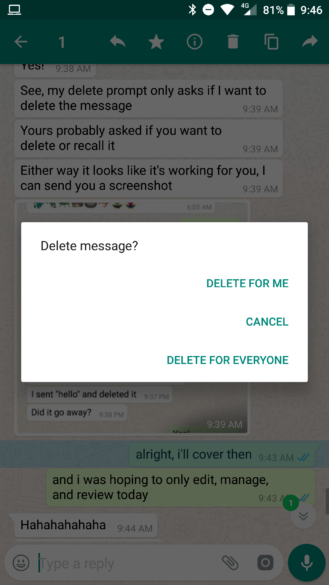 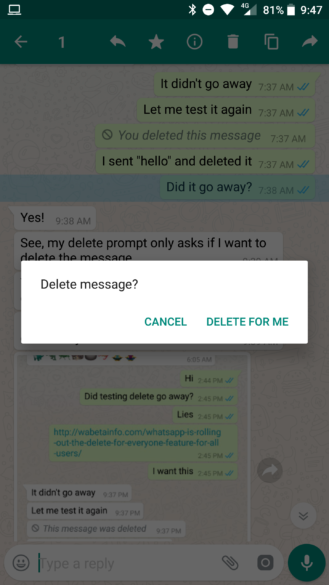 Trashing a recent message lets me remove it for everyone (left), but older messages don't (right).

If I delete a message, it gets removed from my device and a "You deleted this message" shows up in its place. The recipient sees a "This message was deleted" as well. 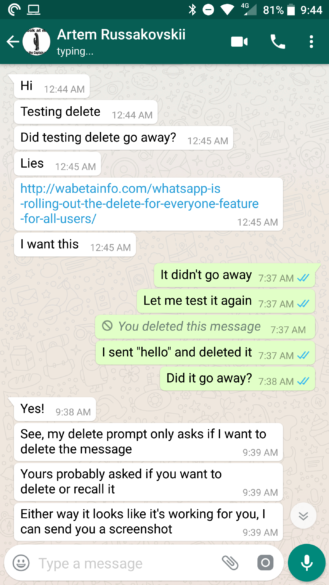 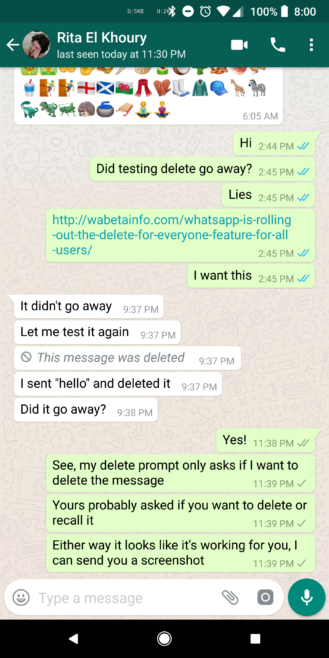 I've tested this with Artem who's running the latest beta as well, and even though he can't delete messages for everyone just yet, deletion worked on his end as a recipient. I also checked with the latest stable version of WhatsApp, 2.17.351, and recalling works there as a recipient. Deletion for everyone is also available to me on WhatsApp Web, as both sender and recipient.

Since this is more of a server-side rollout, we can't be sure which versions of WhatsApp will get this, but your best bet is to grab the latest beta from APK Mirror or by joining the Play Store beta. Either way, I wouldn't count on the deletion for everyone being universal just yet, especially in groups: some users might be on older versions of WhatsApp that don't even support the feature as recipients.

WhatsApp has officially announced that deleting a message for everyone is now rolling out to users globally on Android, iPhone, Windows Phone, and desktop. You'll need to be on the latest version of the app for your platform to use it. (Though odds tell us that it might possibly work on recent versions too, but don't rely on that.)

ASUS Zenfone 4 Max review: Not a shining example of a good budget phone