HTC is getting ready to release two phones in the near future. The first is the HTC U11 Plus, which is expected to have an 18:9 display with minimal bezels. The second is the U11 Life, a mid-range device originally expected to ship with Android One. HTC has an event scheduled for November 2 where the U11 Life is expected to be revealed, but T-Mobile may have just spoiled every detail possible.

A support page for the U11 Life has gone live on T-Mobile's site, with a vast amount of information about the device. First, let's go over the specifications (mirror):

The hardware makes this a Moto G5 Plus/X4 competitor, but for some reason, the rumored Android One software is nowhere to be seen. Instead, the phone will ship with Android 7.1 Nougat, complete with HTC's Sense skin. There is also no mention of a headphone jack, and a diagram of the phone (mirror) doesn't list one either. According to this page (mirror), Type-C earbuds are included in the box. 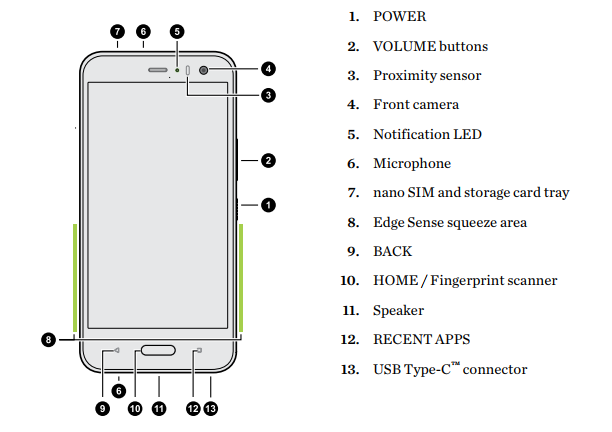 Diagram from the user guide

As for HTC features, the diagram page confirms that the phone will have Edge Sense, and both Sense Companion and Alexa will be included in addition to the usual Google Assistant. Clearly, three virtual assistants are better than one.

At least until T-Mobile takes it down, you can find the original page at the source link below. The user guide is also available here (mirror).

Android 8.1 feature spotlight: Power off and restart screens get a new coat of paint, and ...