It's been a turbulent couple of weeks for Google's latest pair of phones. The most significant point of contention has been the screen on the Pixel 2 XL, which has been reported to have issues ranging from an uneven "grainy" appearance, color-calibration woes, off-angle blue-shifts, to problems as significant as thick bands of darkness or bright color. If that wasn't enough, other issues started to appear like strange sounds and audio weirdness with videos.

With all these potential problems cropping up, how has your opinion of the Pixel 2 XL changed? Examples of more serious issues with the Pixel 2 XL's display.

Our own positions at AP cover a wide range. While some of the issues are affecting both models, only the larger Pixel 2 XL has been suffering criticism for its screen. Some of us still think that it's a pretty great phone, others have become a bit more critical. Even then, it's hard to come to a conclusion until you see one with your own eyes. In an attempt to ease fears, Google has even extended warranties to two years.

There's been more than a bit of hyperbole in the press about the issue, too, with many confusing and conflating terms like "burn-in," a decidedly permanent condition, with less-permanent image retention. And even among reports for things like the off-angle blue-shift, it sounds like there may be some variance between units. 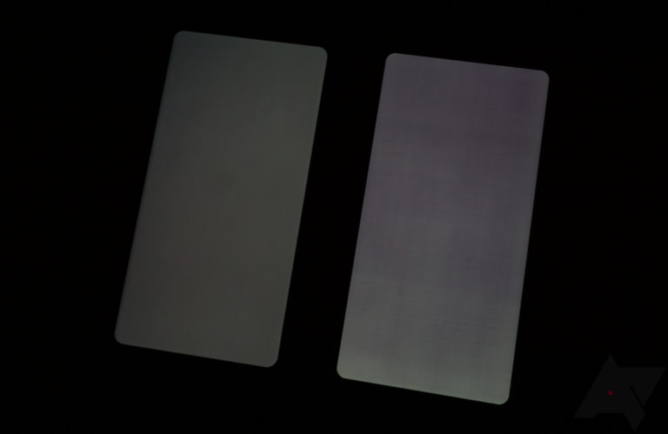 A side-by-side comparison of the Pixel 2 XL (left) and LG V30 (right) at low brightness with an all-grey screen.

Nonetheless, it's impossible to argue that the screen on the Pixel 2 XL is as good as AMOLED displays produced by Samsung, like that found in the smaller Pixel 2. It's just a matter of whether it's a difference you are willing to embrace. I know that the examples I've seen in person seemed fine, with just a bit of grain visible at low-light and a slight exaggeration to the characteristic OLED "smear" effect, but some of the images out there show quite dramatic problems that I wouldn't ever accept.

Even then, "fine" might not be worth it for the price. We thought that the Essential Phone was just "okay." That is until it saw a price drop. Now "okay" looks pretty good at just $500.

Keeping all that in mind, how do you feel? Has your opinion of the Pixel 2 XL changed at all over the last couple weeks?

Pixel 2 XL, but not Pixel 2, now sold on Google Store in Italy and Spain