The Jensen brand might evoke a lot of nostalgia for many of you, but the company isn't stuck in the past. One of its recent forays into modern audio tech is the JSB-1000, which was announced earlier this year, and is its first Chromecast built-in speaker. But that's not the only notable feature of the JSB-1000. For the past few months, the JSB-1000 has been blaring in my kitchen as part of my whole-home Chromecast speakers + Google Homes setup and it has quickly become an integral part of our daily lives. I love the JSB-1000, but each time I think about its current price and competition, I put a question mark around my recommendation of it.

Jensen ships the JSB-1000 in a box that's as utilitarian as the speaker's design: cubic with the speaker, power adapter, and a 3.5mm Aux cable. It's worth pointing out that even though the specs sheet mentions that the adapter is rated at 120V, the adapter itself says it also supports up to 240V. I had no trouble using it in Lebanon with a 220V current. 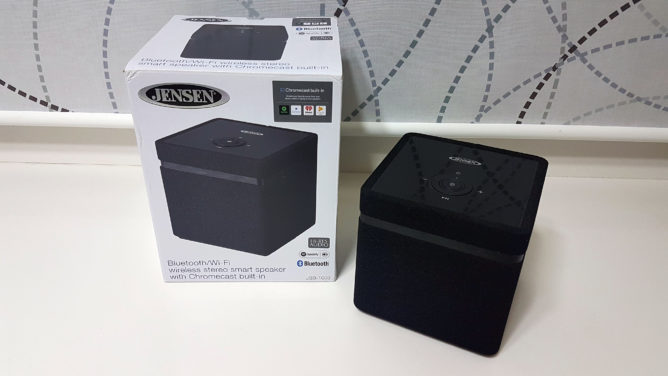 The JSB-1000 is almost a perfect black cube. At 5.12" width and depth, it's only just slightly taller at 5.24" due to its base. It's solidly built with no squeaks or give on its entire body. The front and both sides are covered with a black mesh, with only a plastic line disrupting the rather dull design. The stereo speakers sit at each side, so keep that in mind if you place it near a wall thinking it fires from the front. 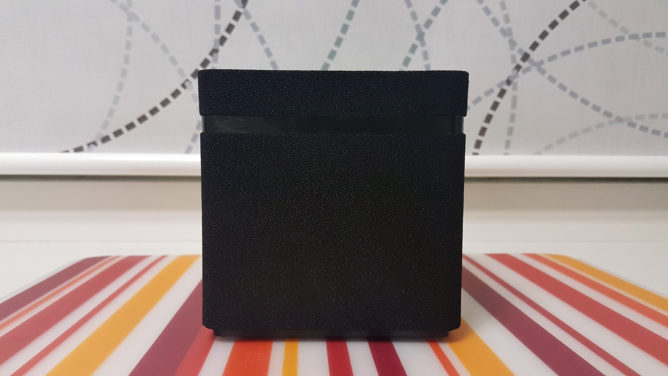 The back of the speaker is also covered with the same mesh, save for a small portion at the bottom that houses the inputs for power and Aux-in as well as the reset button. 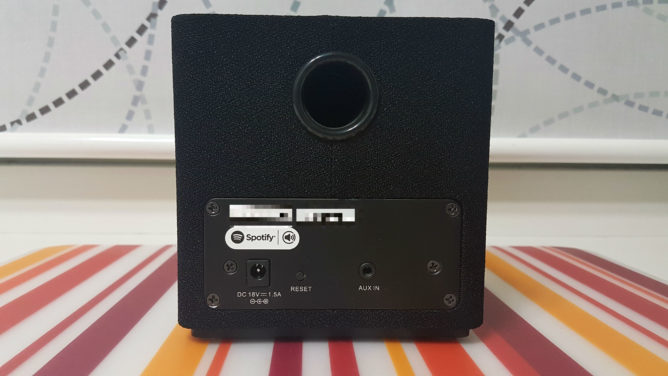 The top foregoes the mesh for a shiny square black plastic with the Jensen logo and the controls cluster. The Bluetooth pairing button in the middle is surrounded by the power button, volume controls, and Play/Pause button. 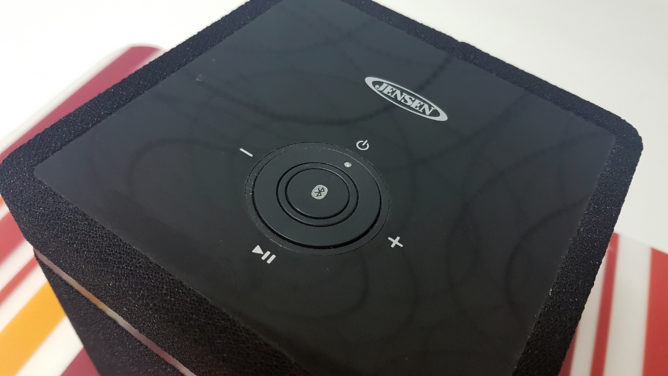 An LED light sits on the power button and it changes colors depending on whether the speaker is in standby (red), connecting (white), streaming music (green), connected over Bluetooth (blue, fittingly), or playing from the Aux input (yellow). 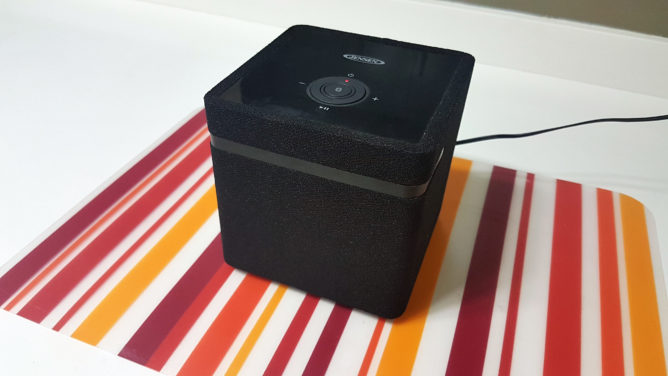 Listening via Chromecast and more

The JSB-1000 can be set pretty much like any Chromecast with the Google Home app. You plug it in and after a few minutes, your phone will show a notification that a new device is ready for setup. The Google Home app takes you through the configuration steps including connecting to your WiFi network and giving the speaker a name. I called it "Kitchen Speakers" because that's where the JSB-1000 sat for me. After that's done, the JSB-1000 enters standby mode where it consumes little power but stays visible so it can be triggered when needed.

The screenshots below were taken before the Google Home app got its redesign a few weeks ago. Keep in mind that things will work the same, but will look different with the new app design. 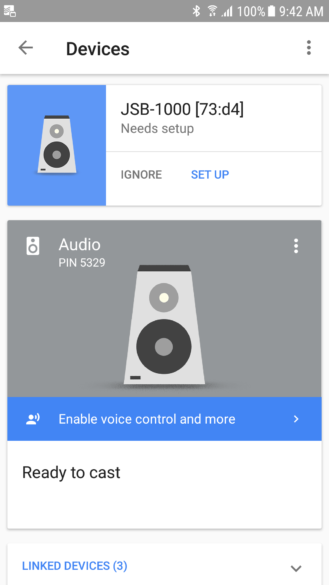 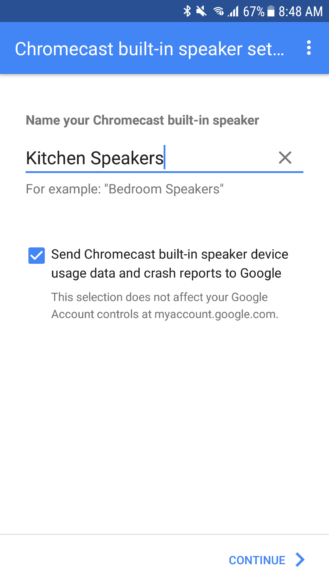 Since it's a Chromecast speaker, the JSB-1000 supports multi-room and can be grouped in the Home app with any of your Google Homes, Chromecasts, and other Chromecast speakers. It's a very nifty feature that always delights me: I can walk from the kitchen to the hallway to the living room and not miss a beat because the music is synchronized across all rooms. Several years ago, a setup like this would have required a pricey and single-brand system with wires everywhere, now my Jensen JSB-1000 works with my Polk Audio soundbar, my JBL Playlist, and my Google Home, across my entire home and without any wires except for powering each device. We're living in the future. 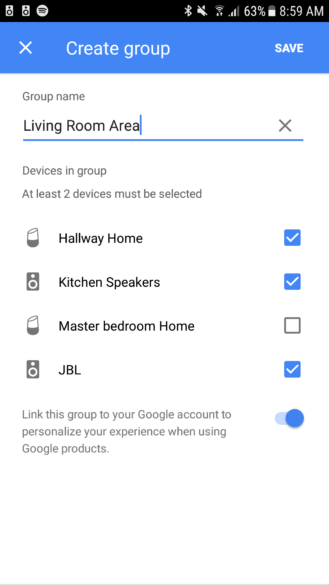 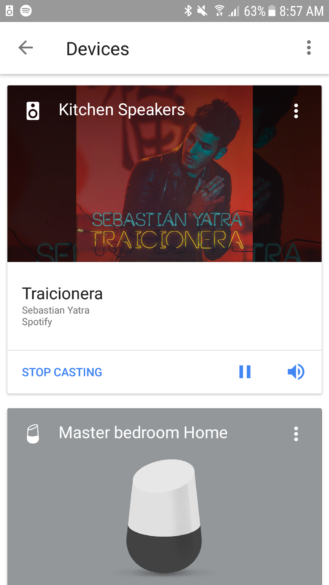 There are plenty of other benefits to the Chromecast integration. You can cast to the JSB-1000 from any Android or iOS or browser tab that supports it, you can issue voice commands from Assistant on your phone or Google Home, and you can control playback from the speaker's physical buttons but also from the casting app or through the Google Home app on any device on your network. 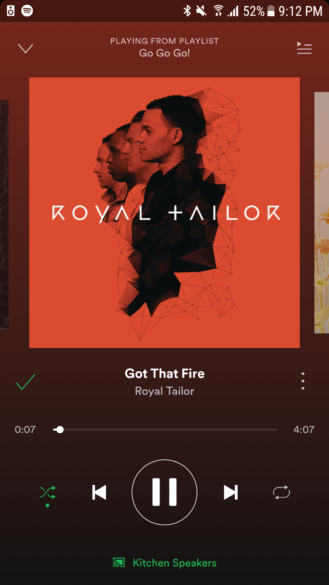 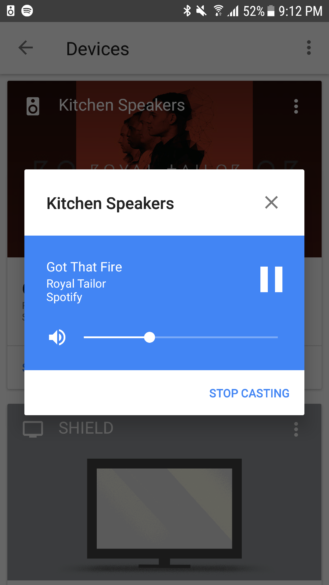 If you don't want to cast, the JSB-1000 also supports Spotify Connect, Bluetooth streaming, and Aux-in. I personally prefer casting from my phone, since it works with more apps than Spotify Connect, avoids any disconnections from my device going out of Bluetooth range, and doesn't interrupt playback because of notifications coming in. But I tested all different methods and they worked as they should. 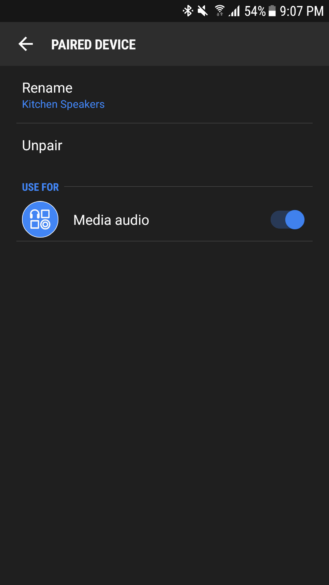 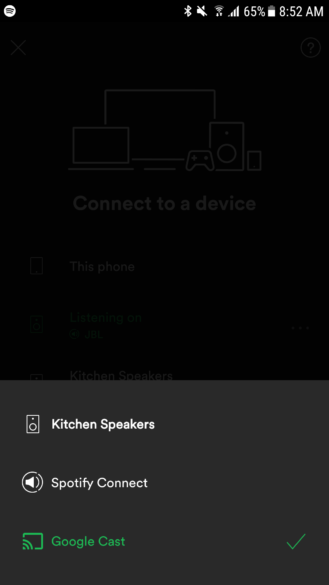 Given its size and audio output, the JSB-1000 is suited for small-to-medium sized rooms. It works well for a bedroom, an office, or in my case, the kitchen. I tested it first in my bedroom, but soon moved it to the kitchen because the idea of cooking or doing the dishes or any other tedious task to a background of music was very alluring. Ever since, it has become an integral part of our daily routine at home.

Each morning I ask Google Home in the hallway to play whatever music I'm in the mood for on the kitchen speakers and two seconds later when I walk into the kitchen, the JSB-1000 is already streaming. Each afternoon, when my husband gets home, he does the same. He can't do the dishes or even put out the groceries now without playing some kind of music. I might have spoiled him (he's not complaining, mind you). It's an aural illusion, but doing any boring task feels like it takes a lot less time and, dare I say, could even be enjoyable when you're listening to your favorite tunes.

Our kitchen is rather small (100sqft, but with two open doors on a balcony and a hallway), so I keep the JSB-1000 at around 50% of its volume most of the time. It's an acceptable level that doesn't drown out our conversations but still fills the kitchen. When one of us is working by themselves and there's noise from the nearby washing machine or a blender or other appliance, we raise the volume to about 80% of the maximum. I've never felt the need to go higher than that, as the JSB-1000 can go really loud for its size and that's not needed in my setting where the walls are so close and reverberate the sound powerfully.

The main downside in our setting is the fact that the JSB-1000 isn't an Assistant speaker, so it can't listen to our voice commands. That means having to use our phones (not ideal with dirty hands) or shouting/walking to the Google Home in the nearby hallway to issue a command. #firstworldproblems 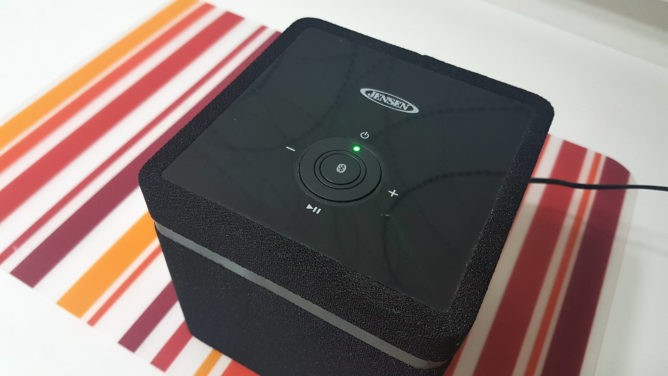 Over the past months, we've used the JSB-1000 to listen to all kinds of audio. From podcasts to different genres of music, the sound profile felt just right. It's a very balanced speaker that controls itself at loud volumes and covers the whole gamut of frequencies very well. The two 15W speakers are, on paper, the equivalent of the JBL Playlist that I reviewed a couple of weeks ago, but unlike it, they don't favor the lows over mids and highs. There's no heart-thumping bass, but there's enough beat to be heard and enjoyed along with the rest of the music.

I could nitpick and cover every aspect of the JSB-1000's audio performance, but it will always come down to the same conclusion: at 50-80% of its volume, the speaker handles every music genre I threw at it with grace and balance. Nothing felt out of its range, whether it was laid back French tunes or energetic Spanish beats, commercial electropop music to jazz, country, alternative, or rock. At even higher volumes, there's very little distortion, and only if you listen closely will you notice that the bass gets a little muddied and the highs aren't as defined. But then you consider the size, the price, and the target, and you can't fault the sound of the JSB-1000.

Jensen's first try at a connected speaker isn't half bad. The JSB-1000 is well built and works just as expected. The multiple input and playback options are handy, and the Chromecast integration is delightful when it becomes part of your daily life and multi-room smart speaker setup.

The thing with the JSB-1000 is that for the many nice features it has, there's nothing oh-so-special about it that makes it a must-have. The design is very drab, the sound, even if powerful and balanced, doesn't have any differentiating feature, and the Chromecast capability is nice but without portability or Assistant doesn't offer any advantages over similarly priced speakers. 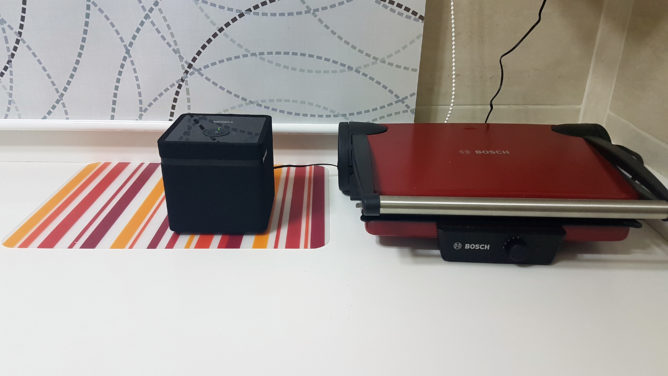 In the same price range, you can pick up a great portable Bluetooth speaker to carry around and outside the house. You'd lose on the Chromecast ability, but that may not be important to you. Or you can get a Google Home that offers Assistant and thus voice commands for your music and smart home, and even if the Home has a lower-rated output, it gets loud enough that you may not care. Like me, the average user who's looking at a compact speaker for a mid-sized room will probably keep any of these speakers at around 50-60% of their output and won't care about ear-bleeding volumes.

At just a little bit more of the price range (around $150), you can get a JBL Link 10 with Assistant and portability but lower output, or you can grab the larger JBL Playlist which goes louder and puts a nice emphasis on bass.

No matter how I cut it, it's hard to justify the $140 price of the JSB-1000 at most retailers. Maybe when it launched several months ago, $140 was acceptable as there was little competition from other Chromecast speakers and there weren't any Assistant-capable speakers other than the Google Home. But right now, there are so many other options to consider. Only Walmart currently sells it for $113, which is better but still a little steep in my opinion. At $100, it would be a more realistic price, and at $70-80, this would be an excellent speaker to deck those rooms you haven't yet set up with any audio outputs.

As it stands, the JSB-1000 would be great for a very small target market: those who want a powerful yet small streaming speaker for a mid-sized room, don't care about moving it around the house, don't need or completely hate microphones listening to their commands, and aren't picky about specific sound profiles. If you fall in that category of users, the JSB-1000 is perfect.

Changing Google's domain will no longer give results from another country