Like many flagship phones, the Pixel 2 and Pixel 2 XL aren't cheap. But while companies like Samsung and Apple try to make you feel a little better about your $700-1000 purchase by including a pair of earphones in the box, Google doesn't. However, some seemingly preproduction packaging that one guy got inside his Verizon Pixel 2's box indicates that Google had at least been seriously considering it.

@madebygoogle My @verizon Pixel 2 included an empty place in box for earbuds, and they were mentioned in booklet. @AndroidPolice pic.twitter.com/9EcG7KXkBj

Reader Lucas Everett reached out to us on Twitter with images of packaging and literature in his Pixel 2 box that indicate that there should have been some earphones inside. Initially, we thought that Google might have originally been planning to include some Pixel Buds, but the Quick Start booklet depicts a wired headset with inline controls and a USB Type-C connection, both things that the Bluetooth-powered Pixel Buds don't have. However, the design is extremely similar to the Pixel Buds', with the same adjustable loops above the buds themselves allowing each individual to create the best fit. 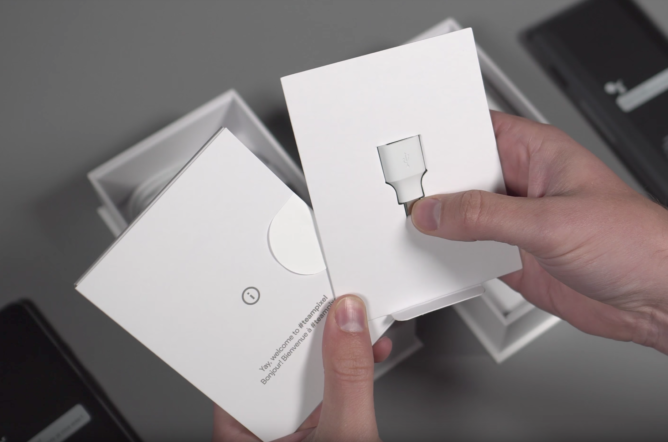 Also mentioned was a missing 3.5mm to USB-C adapter inside the box; perhaps Google felt that including a set of USB-C earphones would keep them from having to include a dongle. For reference, Apple has included both a set of Lightning earphones and a 3.5mm to Lightning adapter in the box of every iPhone since the 7. Lucas had to have the Verizon store give him the headphone dongle from another Pixel 2 box. The store also told him that none of the other Pixel 2 boxes had this tray or booklet. Verizon's Twitter account replied to the tweet, but as you might expect, it wasn't particularly helpful.

2/2 Based on the In The Box information at https://t.co/KPDNKYO3kA you now have those missing parts. ^LB

It certainly looks like Google had been considering including some Pixel Buds-esque wired USB-C earphones, then decided against it. What's interesting, though, is how this packaging even made it to a retail unit without anyone noticing. If any of you got the same earphones-focused packaging in the box, be sure to let us know.

Google has confirmed that this was an early package design, meaning that bundled-in earphones were considered at some point for the US market. Oh well.

Android 8.1 feature spotlight: Ambient Display now has the date and an upcoming alarm