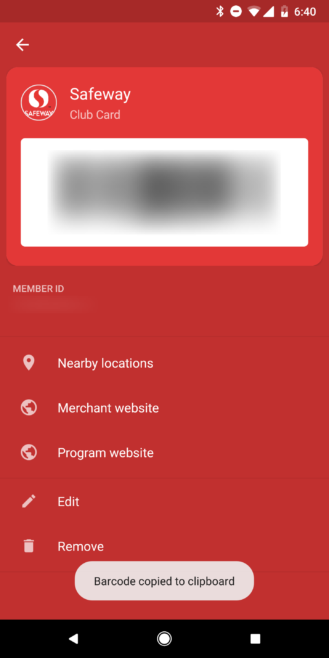 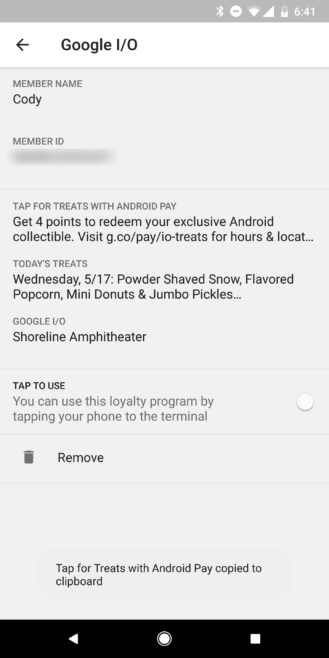 If you've ever needed to quickly copy details from a membership card into a form on a web page, it took just a few too many taps to get each field from Android Pay. The latest version solves this issue by making almost every text field and barcode in the app capable of copying to the clipboard with a long-press.

Copying fields with a long-press isn't allowed on credit or debit cards, but it should work with all of your loyalty and membership cards. You can pick up the numbers from a barcode, member IDs, and just about anything else that isn't a button. You can even get the bigger blocks of text that include special rules or instructions. On some phones you should get a toast notification when the copy is finished, but it doesn't seem to work on all phones – what a strange bug to have.

Android Pay has become a fast and convenient payment method for mass transit. You don't have to mess with exact change, it's more secure than swiping a credit card, and it's easy to see how much you've spent.

Starting last year, Google began promoting integration with Transport for London (TfL), and many major cities have upgraded their systems to accept contactless transactions since then. However, as far as I can tell – and I'm not sure if this is entirely accurate – none of the transit authorities have worked with Google to add their own payment systems to Android Pay. In other words, you can use your phone to make one-time payments to catch a ride, but you can't add the transit authority's special prepaid card to Android Pay and enjoy benefits as a frequent traveler.

Judging by a new line of text, it looks like Android Pay will be expanding to support transit cards.

It's probably no coincidence that this line is appearing just days after the Metropolitan Transit Authority (MTA) in New York City announced plans to replace the current MetroCard system with contactless methods like Android Pay.

Judging by an announcement from the TriMet in Portland-Vancouver area, testing began in December and may make it the first location to support transit cards. 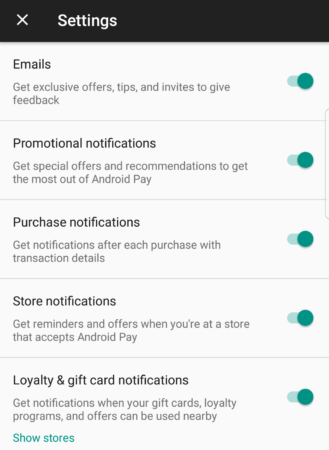 New lines that very closely match the titles and descriptions for 4 of the 5 toggles in the Android Pay settings screen have been added to the app, but they aren't showing up anywhere yet. Most of the text is actually not an exact match, but it's so close that the purpose is obviously the same, and the old lines are still there and visible inside the app. As for the 5th toggle, it's an opt-in for email updates, which obviously doesn't make sense for a notification channel.

Samsung Pay might be known for running a mostly endless series of promotions to encourage customers to go that route, but Android Pay isn't completely out of the loop with giving things away to its users. Last year, Google added a promotional holiday-themed game in the UK during which Android Pay users could earn and open crackers for prizes.

It appears Google is planning to have another go at it this year, but the game has changed. This time, customers will be collecting Doodles. You read that right, Doodles. I assume that's a reference to Google's famous Doodles, but it could always be linked to something else instead.

Last year, the promotion was first spotted in a teardown around this same time, and the confirmation and details were announced shortly after. I'd like to think this promotion will be open to all, but there aren't any more details that could give a better hint.