Google began rolling out a new version of the Photos app this afternoon. It's not a particularly feature rich update, it appears to include just a convenient shortcut for notification channels and a promotion for free shipping on photo books. However, a teardown does add a bit more meat to this release as it foretells of some basic integration with Google Maps and some helpful wizards for building quality photo books. 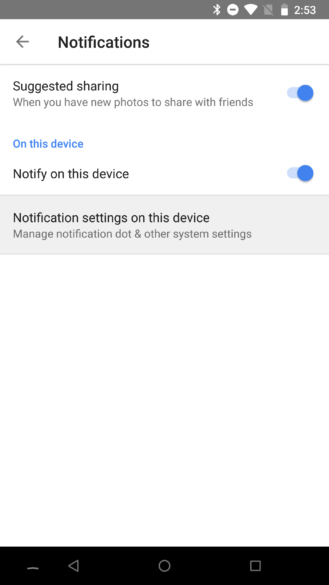 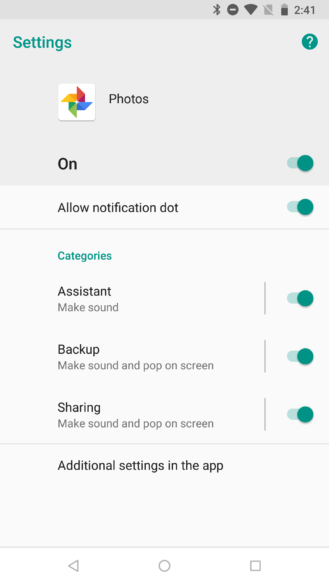 Notification channels have their faults, but they can be really helpful if you want to tailor them to fit your life and habits. One notable issue with notification channels is that most people don't know they exist, or at least don't know how to find them easily. Apps can make this much easier by simply adding a shortcut that will open up the system settings, and that's what Photos did in the latest update.

To be clear, the notification channels were already there, Photos simply added another way to reach them. This isn't appreciably faster than using the app switcher shortcut (i.e. hit the app switcher button, long-press the app icon, hit the info button, and finally hit the option for app notifications), but it's going to be more intuitive for people that aren't exactly tech-savvy. 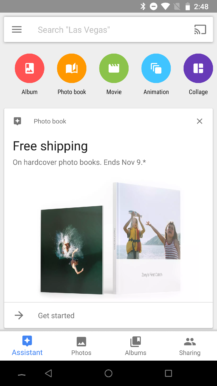 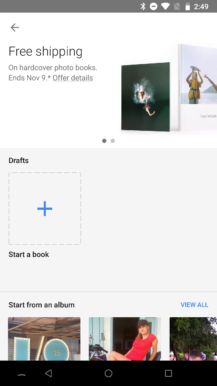 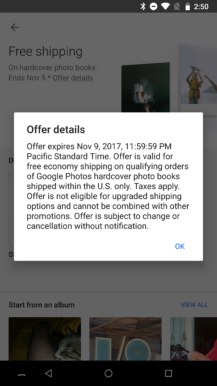 This isn't exactly a feature update for the app, but it's worth a quick mention if you're interested in photo books. Quite simply, Google just started a promotion on photo books that includes free shipping through November 9th. The screenshots above show the promotional image and exact terms of the offer.

However, a teardown of the app revealed pretty strong evidence that the promotional offer will probably run all the way to Cyber Monday, which lands on November 27th of this year. Evidently, Google will also show another card at some point with a reminder to order photo books as the last minute approaches to get them delivered before Christmas.

Google Photos may be where we place most of the shots that come out of our camera, but there's another app that might be home to quite a few of our pictures: Google Maps. Judging by a new string from the teardown, labels in Google Maps will be searchable from Photos.

In my quick experiments with this, it doesn't seem to be working for me yet, but maybe I just don't have the right combination of photos and labels.

I know the name "photo book wizards" sounds cool (or dorky, depending on your outlook), but it's going to be pretty tame in this situation. Google Photos will soon include a few helpful guides for creating certain themed photo books. The themes will include: Family, Friends, Kids, and "a special someone," which is for couples.

There's not much to go on with the text that is here, but it's worded in such a way that leaves me thinking this feature will try to automate most of the process by asking users to simply choose people identified by the app, then pick from their pictures to find the best shots. That would at least make it a little more convenient than picking each photo manually or using an album as a starting point and then cleaning out and adding more photos by hand.

Android 8.1 OTAs rolling out to beta users while manual OTA files temporarily on hold due to ...

Google will update Pixel 2 and 2 XL with more saturated color mode, says XL burn-in is not an issue