On that note, Google also seems to have pulled the manual OTA file downloads for the 8.1 developer preview, so right now your only options for migrating to the developer preview are registering for the Android Beta Program and waiting for the update, or flashing from the full factory images onto an unlocked bootloader. 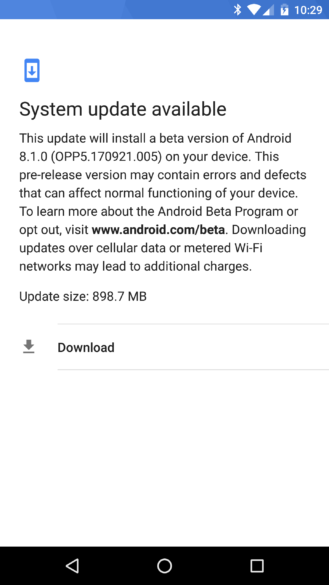 In a support thread on the OTA sideloading issue, a Googler made the following statement:

[email protected] added comment #38:
Android 8.1 OTA's are live now. If you have enrolled for the Android Beta program, please expect them shortly. At this point in time, we do not have OTA images that can be side loaded.

So, if you're on a bootloader-locked device, right now your only options for moving to the 8.1 developer previews are to register for the beta program or wait for Google to bring back the OTA files for sideloading. At least now the Beta Program OTA appears to be rolling out, so you shouldn't have to wait too long if that's the route you take. In addition to the reports we've received, we can confirm that an OTA from the Beta Program registration has hit one of our devices.