Nokia and HMD are keeping up their promise of releasing fast updates to the collection of Android devices they announced this year. After the rather timely monthly security fixes, now's the time to get a more substantial update in the form of Android 8.0 Oreo but you'll need to have a Nokia 8 to get your first taste.

Juho Sarvikas, Chief Product Officer at HMD, just announced that the Oreo beta test is available through Nokia phones beta labs for owners of the flagship Nokia 8. If you head over to that page, you'll be asked to sign in (fortunately, a Google login is accepted) then to validate your phone's IMEI number and operator. Once that's done, you can read the disclaimer about backing up your data, tick a couple of checkboxes, and you're signed up for the beta. If you feel like you're done with the test and want to roll back to the stable Nougat version, you can request that via the same beta labs page.

Although the site says that the OTA notification might take up to 12 hours to show up on your phone, I waited a minute and manually checked for an update on my Nokia 8 (my review is coming soon) and there it was. I'm downloading it now. According to the changelog, it has the October security patch too, which is neat. 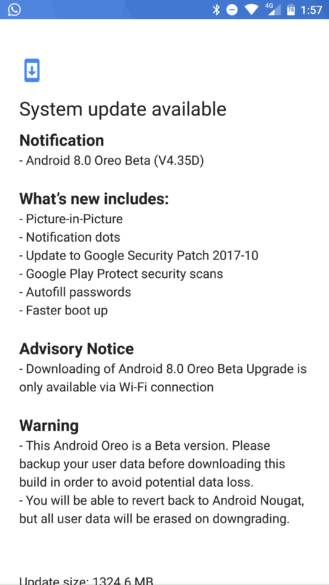 I'm quite pumped to see HMD keep up its promise for updates and work so hard to include the community in its efforts. This is a great start for the relaunched Nokia brand and we'll be keeping a close eye on it to see how things develop. For now all I can say is things look very promising.