Sega's latest SEGA Forever release is a moderately unknown title and something of a hidden gem from the Genesis library. It is called Decap Attack Classic, and it is a classic 2-D sidescrolling platformer from the 16-bit age. You play the part of a headless mummy named Chuck D. Head, and it is your job to take on the underworld demon Max D. Cap. Despite the silly puns, this is a competent platformer that Sega has seen fit to release on Android. But the question remains, has it held up? 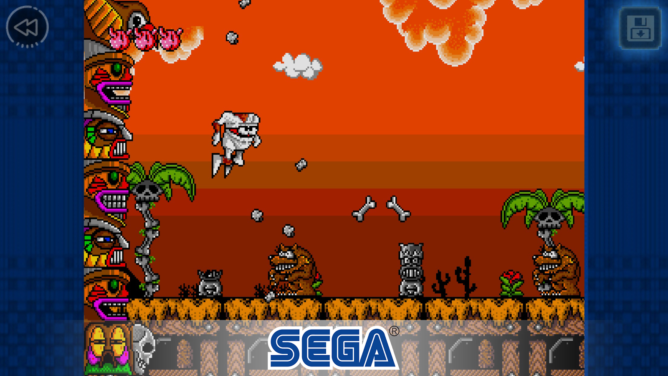 To be honest, that question is a little loaded. If you were wondering if the graphics, soundtrack, and gameplay hold up, I would say they do. But there is one glaring problem. These SEGA Forever releases use a shoddy Unity-based emulator that has serious control issues. Despite Sega claiming that all of their Forever releases have HID support, the feature has in fact been broken since its inception as the d-pad will not work. So if you plan on using a physical controller, you are out of luck. And that is really where the game falls apart. Now you are stuck using the all too often imprecise touchscreen controls for what is a pretty tough platformer that demands precision. Suffice to say this release is subpar thanks to the emulator Sega wraps their ROMs in. Short of that, this is still a fantastic classic platformer with beautiful 2-D pixel graphics and a pretty amusing story.

The good thing is that these SEGA Forever games are offered for free, though they do contain plenty of advertisements. While the ads can be annoying, you have the option to spend $1.99 to remove them. But frankly, I see little reason to do so when the controls ruin the experience. Honestly, you'd be better off using a third-party emulator from the Play Store and loading up your own ROM, as at least you would have working HID support along with customizable touchscreen controls. But hey, you don't have to take my word for it, download Decap Attack Classic and take it for a spin and see for yourself.