Calibrated color has been a hot topic recently for both Android and the Pixel 2 phones, and the Android 8.1 developer previews indicate more changes on the horizon. As of the current preview images, the "Picture color mode" sRGB toggle in Developer options has been removed. This change makes devices like the OG Pixels and last-generation Nexuses match the new Pixel 2 and 2XL, which similarly lack the setting since a calibrated mode is the default. 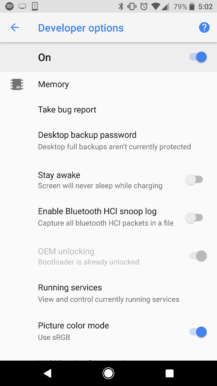 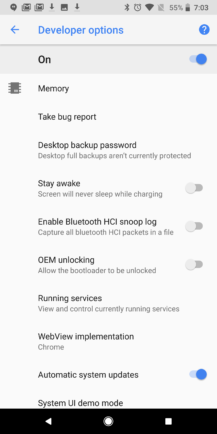 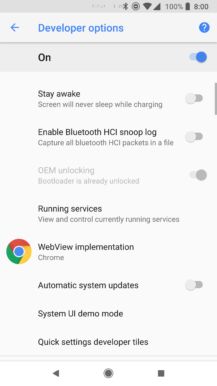 From what we can tell, the devices we've updated to 8.1 aren't just no longer showing the option, they've reverted to using the default colors as well. So the lack of an sRGB toggle in 8.1 right now means you can't access a calibrated mode at all.

I would bet that we'll see calibrated modes return in another form later. Given all the attention the subject has received recently I doubt that they're gone for good. Maybe they'll come back in the future as a better and expanded set of options in the Display section in settings — where they probably should have been to begin with.

We've still got a lot of stuff to dig through in the new developer preview images, so keep an eye out for our updates and posts on the topic.

Though it's missing on the Pixel XL, it appears that the 8.1 Android Studio emulator images are still showing the option for sRGB, and we have conflicting reports for the Pixel C on the 8.1 developer preview images as well. It's possible that the option may still be present on some other devices.

Canceled Pixel 2 'muskie' by HTC appears in AOSP, had 3830mAh battery and Pixel Visual Core on board