File this under bug or under the inexplicable decision column. For the longest time, Android has had an option under WiFi settings that lets you change the default behavior (always on) to turn off WiFi during sleep all the time or only when it's not charging. It's one of those neat hidden features that we rather recently remembered as super useful in one situation: if you want to avoid draining a secondary device (think tablet, often) and prolong its battery life without keeping it on the charger all the time.

Stock Android calls this "Keep Wi-Fi on during sleep" but other OEMs have different names of it. Regardless, you can always count on the setting being there. Except on the Pixel 2 and 2 XL. Yup, you read that right. For some reason, the option isn't anywhere to be found in the Pixel 2's settings. It's not even hidden in Developer Options, just in case Google decided to move it there. 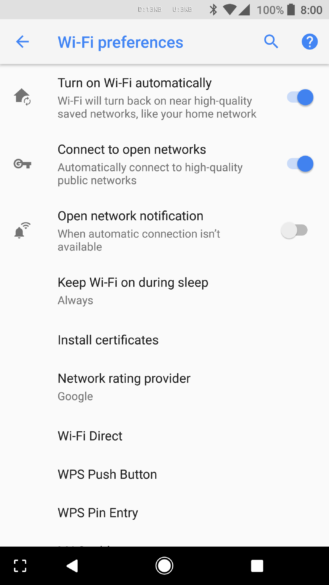 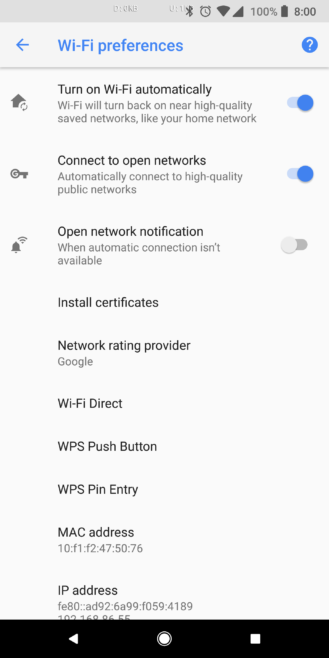 Presumably, with the option gone, the default and only option is "always," so as with all of our team units, WiFi is always working during sleep and you can't turn it off during sleep anymore. That might be a small inconvenience for a device you plan on using all the time and want to always get notifications on, but it'll be a more important annoyance later if the Pixel 2 becomes a secondary phone for you. You'll then have to rely on third-party apps like Tasker or WiFi Automatic to turn WiFi off while your Pixel 2 is sleeping.

The worst situation though is that of our tipster, Jeff. His Pixel 2 won't keep WiFi on during sleep, so each time his screen goes off, his phone switches to data and starts sipping at his plan without him noticing. Jeff was instructed by support to check the option for keeping Wi-Fi on during sleep, except that he can't because the setting isn't there. For some reason, it seems like his phone came with the wrong default for that option.

This is one very annoying bug and oversight, if it indeed is one, or one big step backward if Google intended to remove the setting and won't be bringing it back.

Thanks to reader Tony B., we may have a solution to check and change Wi-Fi behavior during sleep in adb. My Pixel 2 hasn't shipped yet so I can't confirm it, but you can try these commands:

Reader Cameron joined in with further clarification as to the different values you can set the WiFi sleep policy to and what they correspond to:

So instead of "adb shell settings put global wifi_sleep_policy 2" you can replace the 2 with 0 or 1 to get the different settings.