Several different complaints have been reported, ranging from a blue tint when viewing the screen at an angle, screen burn-in or image retention, lines of dead or colored pixels, low light graininess, dull (if accurate) color profile, light bleed, and even a strange shadow arc. I had to take a deep breath after just typing that list. This video shows another interesting issue with a line of green pixels when the screen is pressed. Before we go any further, let's just be clear about something. It's common for newly released devices to have some issues, particularly those from the first production run. You won't find an example of any phone launch where every unit is uniformly perfect. I remember ordering the Nexus 4 as soon as it became available, and I ended up returning three imperfect models before I got one I was happy with, all due to different manufacturing defects. I swore I'd never order a phone so early in its production life again, yet I willingly flaunted my own rule when I excitedly ordered the Pixel 2 XL (which isn't coming till mid-November, sadly, so maybe mine will be alright).

That said, the noise about the Pixel 2 XL display issues is getting louder, and it's probably not normal for a company to send out so many problematic review units unless there is actually an inherent defect with the display. It's worth noting that there have been similar reports of problems with the screen on the LG V30, which uses either the same or a very similar panel to the Pixel 2 XL. That would also suggest that the issue could be widespread.

That's some pretty wild OLED burn-in on the Pixel 2 XL after maybe 7 days of full-time use pic.twitter.com/EPJTs6D0Kg

Android Central's Alex Dobie tweeted a picture (above) of the nav buttons on his 2 XL, showing a particularly bad case of what could either be screen burn-in or image retention. Soon after, Dieter Bohn of The Verge noticed the same on his review unit and reached out to Google for comment. For the first time, the company acknowledged that there might be a problem, and here's what it had to say:

The Pixel 2 XL screen has been designed with an advanced POLED technology, including QHD+ resolution, wide color gamut, and high contrast ratio for natural and beautiful colors and renderings. We put all of our products through extensive quality testing before launch and in the manufacturing of every unit. We are actively investigating this report.

According to Stephen Hall, not one but two 9to5Google units also show potential burn-in. Ryan, who reviewed the phone here at AP, said he could reproduce this but that it was almost certainly image retention rather than screen burn-in, which is a far less serious, temporary problem. He noticed the faint remnants of the nav buttons, too, but after a couple of minutes playing full-screen video, they disappeared. Burn-in usually takes months to set in, too. While image retention is not ideal it's probably not a deal-breaker, and is common in OLED panels (even if Samsung hasn't had this issue for several years). Who knows, though, perhaps some other units do have the more serious burn-in problems that Ryan's did not. 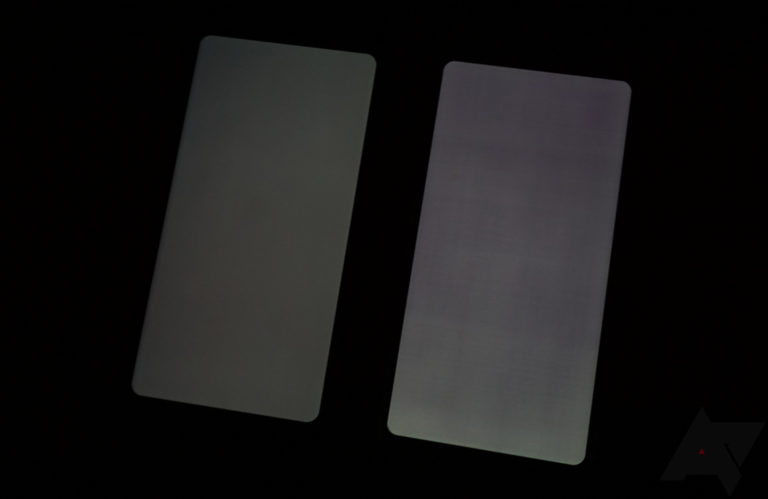 Ryan's side-by-side of the Pixel 2 XL (left) and LG V30 (right). It's clear the 2 XL doesn't have the same banding/bleed issues.

With reports mounting, Google really had no choice but to issue an acknowledgment of some sort. It's possible that the display problems have already been solved by Google and LG, and that the next batch of units that will ship to buyers will be better than the current crop. Some of the issues potentially aren't a big deal, such as blue tint, graininess, and image retention, issues that are suffered by most OLED panels to some extent.

Regardless of whether Google rights these wrongs, you're entitled to expect better when you are paying at least $849 for the flagship phone from the maker of Android. You shouldn't be punished for being an early adopter, and you shouldn't have to put up with any display issues whatsoever, no matter how minor. If there is an inherent flaw with the display production, Google will have a serious PR nightmare on its hands, and deservedly so. This is the last thing the company needs in the wake of the Home Mini debacle. We'll just have to watch this space and see how the story develops.

If you want to test your screen, check out the Display Tester app on the Play Store. As always, let us know your findings in the comments below.

Google has addressed some of these issues with recent statements:

To allay users' long-term dears about the display on their Pixels, Google has extended the warranties to two years, globally.

At the same time, we've also heard of other issues with the devices, such as strange noises, and more of the same screen problems:

@GooglePixels @backlon @ArtemR chalk up one for screen failures for a Pixel 2 XL - one full line ruined after a week of use pic.twitter.com/hi1zikGzmD

After barely 24 hours I've got a line across the top of mine. It's going back pic.twitter.com/q4gMIgv9Gf