The new icon in YouTube Gaming keeps the same basic outline and a single slice of glinting light, but it trades out the low-poly look and shadows for a simpler cherry red throughout. While it does look different, the thing that might be more noticeable is that the icon is also adaptive, so the shape of the outline can be determined by your device or launcher settings. Correction: The icon isn't adaptive, but the dev team removed the conflicting icon listing that allows it to behave like an adaptive icon in some launchers. – Thanks, Eduardo.

There is also a new splash screen to go along with the updated icon. This replaces the previous splash that featured the original low-poly icon animated into a heartbeat. I admit, I kinda miss the old one, but the new one is good. 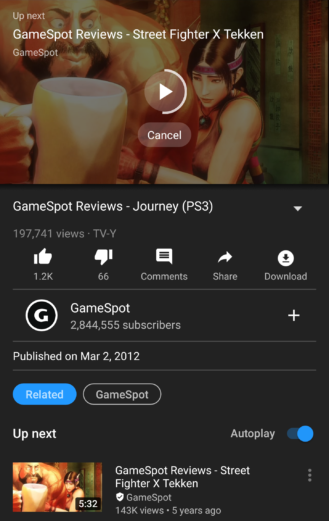 Also new in this release is the Autoplay function that most of us are familiar with from the main YouTube app. It works the same way, so you should already know what to expect. The animated countdown dial appears on the video frame before the next video starts, and it includes buttons to cancel the next video or start it immediately.

Autoplay is enabled by default in this update, so if you aren't a fan of this feature, be ready to turn it off the next time you start a video.

Nokia 7 unveiled with a Snapdragon 630, glass back, and 'bothie' camera mode

Moto X4 (Android One edition) review: This is not the Moto X you're looking for