For years, Adobe Lightroom has been the editor of choice for photographers. As opposed to Photoshop, which is more designed for pixel-level editing and layered images, Lightroom is geared towards manipulating photos. It's non-destructive, meaning that any changes can be easily reversed, and all of your edits are kept in the app's catalog.

Adobe has offered iOS and Android versions of Lightroom for a while now. You can select certain collections (aka albums) to sync to the cloud, for editing and viewing on the go. As you might expect, the mobile apps don't have all the functionality of the desktop applications, but they can still be helpful for quick tweaks and importing photos from your phone/tablet.

Adobe had its Max 2017 event today, where the company announced updates to their Creative Cloud suite. Adobe announced an all-new Lightroom app for the desktop (the existing app is now 'Lightroom Classic'), and the mobile apps are receiving plenty of changes. So without further delay, here's what's new in the Android app.

The Lightroom iOS app has had a special layout for iPads for a while now, but the Android app has been stuck with just a phone layout. This was especially a problem for people trying to use Lightroom on their Chromebooks, like me. At long last, Adobe has added a tablet interface to the Android app. 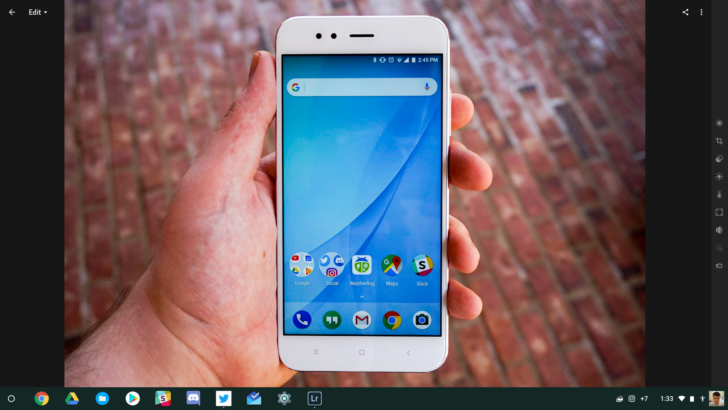 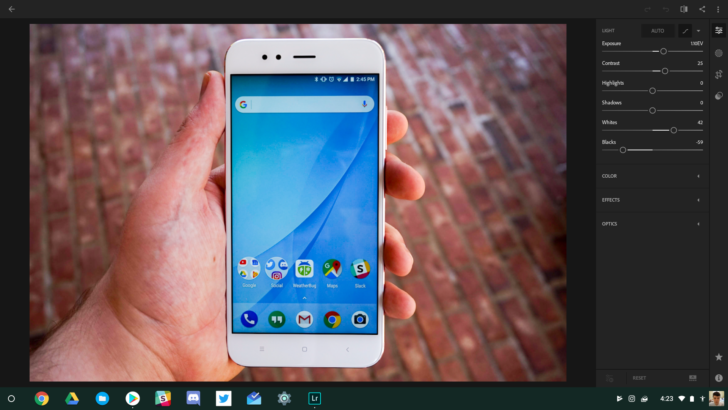 It's difficult to compare because my earlier screenshot doesn't show an expanded panel, but the new UI scales much better to bigger screens. All the sliders and panels are now labeled, there are new controls for cropping, and navigation is so much easier.

In case you were wondering, this is the same updated version of Lightroom that was shown off on the Pixelbook at Google's recent hardware event. So if you were worried that other Chromebooks would miss out on the improvements, you can rest easy.

There are still some areas that could be improved. The album view (previously Collection view) still has the same stretched-out phone interface, and it would be nice if one of the panels could auto-open when you select a photo to edit. Still, this is a huge improvement over the old layout.

Another new feature is the 'Selective brush.' The mobile app already had a brush you could use to remove blemishes in pictures, but this is much more powerful. Once you tap the dotted circle button, you can select areas of your image via a brush, adjustable circle, or a slider. In the below screenshots, I used the circle selector. 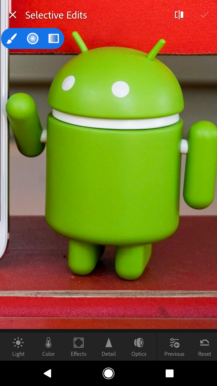 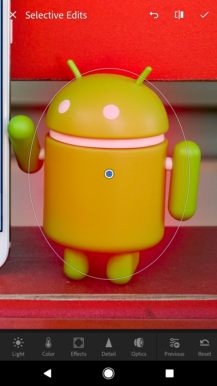 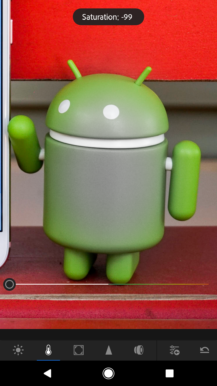 Once you have parts of your image isolated, you can adjust them independently from the rest of the image. All the options available for image editing are present (except crop, obviously), including light, color, effects, detail, and optics. For example, you could make one region of your image monochrome while the rest is in color, or vice-versa.

It's important to note that this feature is only available if you pay for Lightroom via a Creative Cloud subscription.

One of the features of the new Lightroom desktop application announced today was 'Adobe Sensei,' an AI algorithm that figures out what's in your photos and tags them, exactly like Google Photos. This feature is also now available on the mobile apps. I don't have very many photos imported into Lightroom at the moment, but it seemed to mostly work. 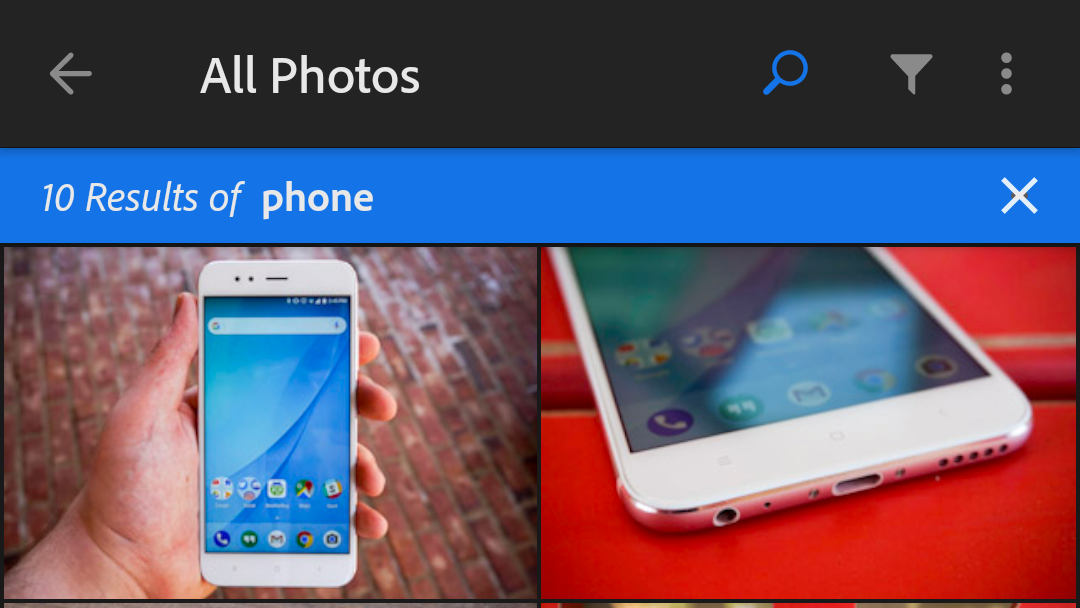 Searching for 'headphones' brought up pictures of headphones, searching for 'star' revealed my pictures from the recent solar eclipse, and so on. There are definitely a few quirks though, as a search for 'phone' also brought up a picture I took of a Roku remote. As with all AI-based technology, I expect this will get better over time. Again, this is only available for paid subscription users. 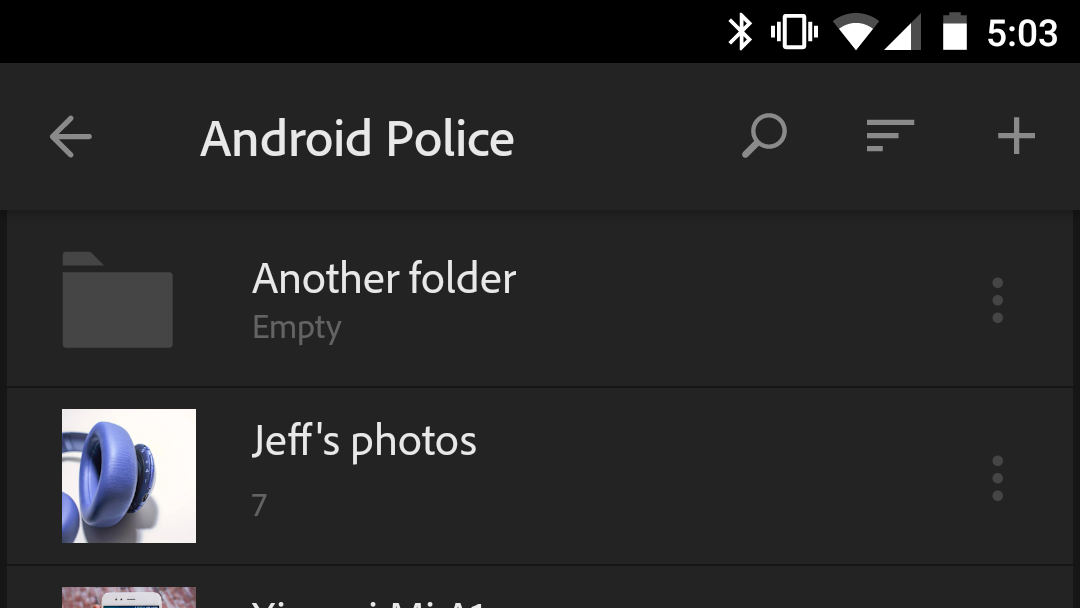 This one is pretty self-explanatory. You can now create and manage nested collections from the Android app. You can create folders inside of other folders, move them around, and move images between them. Nothing exciting, but still nice to have.

There are a few other minor improvements Adobe mentioned in the changelog. First off, the app now supports HDR on the Note8 and OnePlus 5. I don't have either of those to test with, so I'll take Adobe's word for it. Hopefully other HDR-compatible phones, like the LG V30 and Pixel 2, will be supported in the future.

You can also now search for specific keywords, alongside the ones that Adobe's machine learning algorithms assign to your pictures. Finally, the update has your usual bug fixes and improvements.

The APK is signed by Adobe and upgrades your existing app. The cryptographic signature guarantees that the file is safe to install and was not tampered with in any way. Rather than wait for Adobe to push this download to your devices, which can take days, download and install it just like any other APK.

[Update: Official details] The Pixel 2 can automatically switch to Do Not Disturb mode when ...