Foldable phones aren't new. In fact, Kyocera sold one nearly seven years ago on Sprint. It was terrible, but my point is that the concept is not novel, and companies have even gone so far as to make such foldable smartphones commercially available. They've been rare, of course, and probably for a number of very good reasons: they're hard to design, hard to engineer without compromise, expensive to produce, and of questionable utility in general.

ZTE thinks it finally has a foldable phone you'd actually want to buy, though - the new Axon M. Will you actually want to buy it? If I'm really honest? No, probably not. But this is easily the best take on the foldable phone concept I've seen yet, and one that sidesteps some of the tough engineering challenges companies like Samsung and Lenovo have conceptually tried to defeat by using more traditional solutions to the folding phone problem. 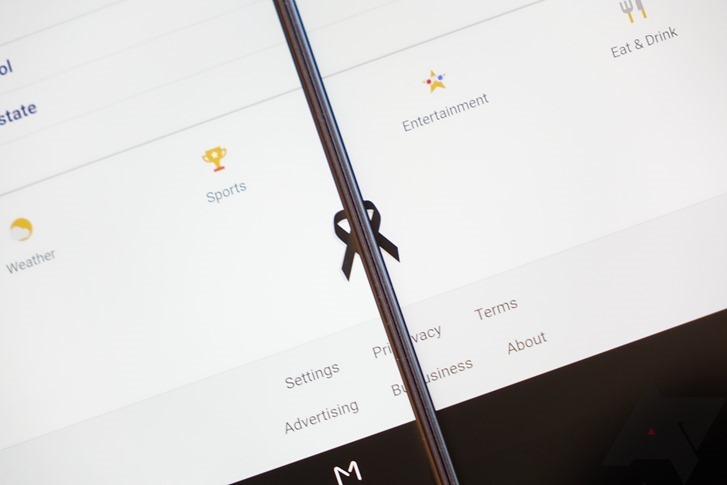 The Axon M has a very noticeable gap between the displays in "unfolded" mode. ZTE took two LCD panels, put them on a hinge, and gave them as little bezel along one edge as possible. So when you unfold the Axon M, you do get a black gap between the two screens. This gap is essentially an admission that an actual, foldable screen is a very, very hard thing to do in a practical, durable way with currently available technology.

I am not inherently opposed to the gap, because it has allowed ZTE to actually build a real phone, as opposed to a hyper-fragile concept that sits inside a display case at a trade show. In short, without the gap, the Axon M really couldn't exist. If that's a deal-breaker for anyone, so be it. 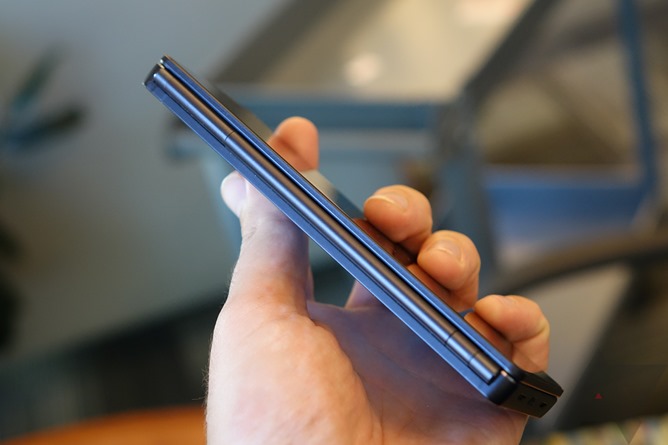 The hinge mechanism seems quite sturdy, and holds the second display firmly in place when in the "normal," folded configuration. The phone absolutely feels like one piece when you don't have the display unfolded, something I think is quite important to get right. Whether the hinge will stay perfectly firm and keep that screen tight against the rear panel after a year of use is something that's harder to comment on right now. (Oh, and dual screens means the Axon M only needs one camera - if that isn't obvious [it wasn't to me!], just think about it for a second.) 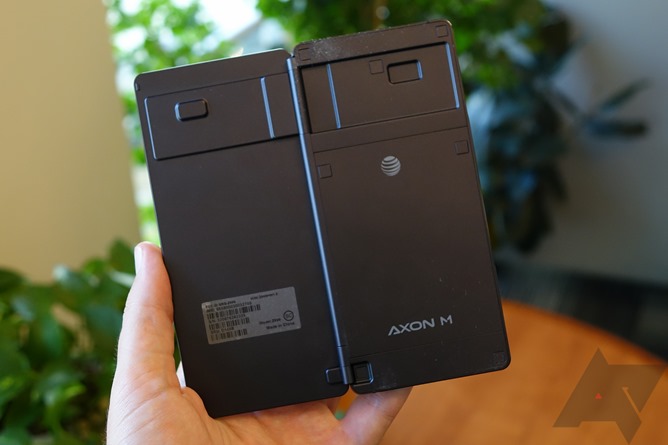 Speaking of use, ZTE says, on average, the ribbon cable connecting the display panel to the brains of the phone - which has to run through the hinge, obviously - should survive around 20,000 folds and unfolds before potentially becoming damaged. According to ZTE's internal testing, it expects that owners of the phone will open and close it a little under 20 times a day, meaning the guts inside the hinge should last at least three years under normal use.

When unfolded, I didn't feel any odd flex or see any alignment issues with the two screens. The Axon M, superficially, seems quite well-engineered. I was testing what ZTE says is production-ready hardware, and I was genuinely impressed with the fit and finish. The housing for the second display is all plastic, but I have a feeling that's mostly about weight and thickness, not cheaping out. Given the Axon M is still very thick and pretty hefty, I think that was the right call. 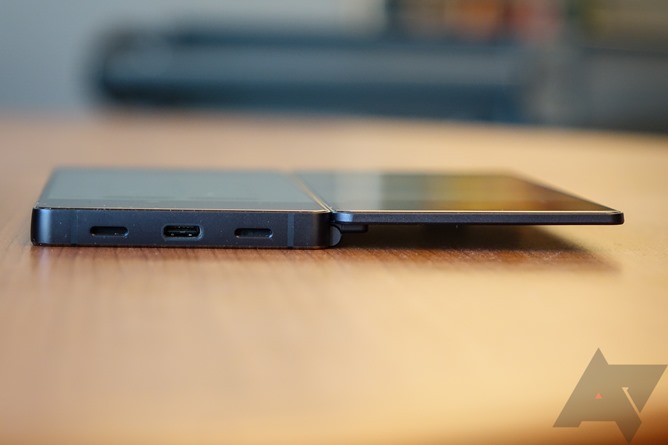 The software is surprisingly well done

Going into my briefing with ZTE, I expected the Axon M's splitscreen implementation to be, at best, kind of half-baked. I was surprised to find that ZTE really seems to have put considerable thought and effort into making it work, even if it's not perfect.

The Axon M has four "modes" in which the two screens can be used. I'll get the most basic, least useful one out of the way: you can choose to have the main screen on and keep the second screen off even when it's unfolded. This is useful when you want to use the hinge mechanism as a phone stand, or the second display as a "handle." 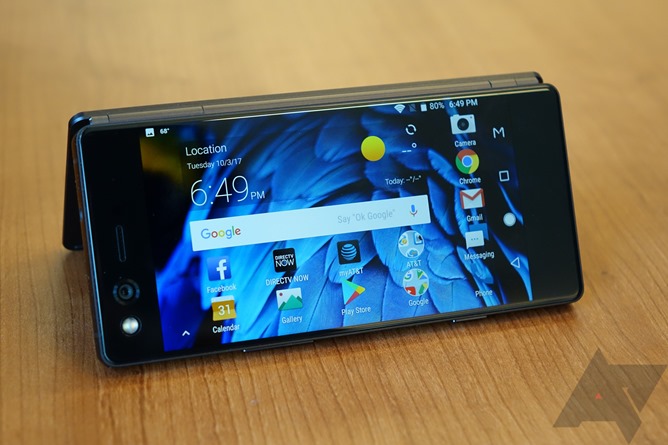 The other less useful modes are mirror and full-screen. Mirror mode does exactly what you'd expect: it mirrors the content on the primary display to the secondary one. Why? ZTE says it's a great way for two people to watch the same video when they're sitting across from one another. OK, I guess. Full-screen just tells Android that, logically, you only have one display panel instead of two. So, your phone's layout will change to fully utilize both screens to display a single app. If an app fails to recognize this mode, you can toggle an option in the phone's settings to force the full screen layout to work in any app. Full screen has its issues, though. For one, it doesn't account for the physical seam between the screens, and so the second display shows content as if there were no gap between the panels at all. This means stuff displaying across the middle will look stretched over the gap. I don't know that there's a right or wrong way to do things here, but I'd personally prefer the software to behave as if the seam were also part of the display, so some content would just be "invisible" in the middle. Sure, you wouldn't see everything, but I think that it would be a more pleasing visual experience (rather, less annoying). 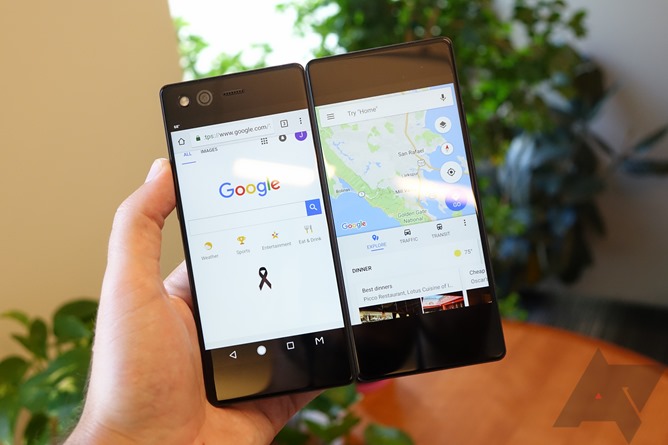 The mode ZTE believes will be most commonly used - and I agree - is A/B. That is, one activity appears on the primary screen, and another appears on the secondary. You can have a messaging app up on the right panel and watch YouTube on the left. I feel like the use cases basically make themselves here, so I won't inundate you with examples, so much as explain how it works, behaves, and performs.

In split-screen mode, apps run truly concurrently. You can have a YouTube video on one screen and play Pokemon GO on the other, and performance even in these heavy-load scenarios seemed totally fine to me. It probably doesn't do great things for your battery life, but it absolutely works. I genuinely found this quite impressive, because I've always believed Android is very, very bad at running intensive applications simultaneously. ZTE also says they've made significant changes to memory management to ensure that one screen won't push the app on the other one out of memory, something else I'm sure we'd all kind of expect Android to do in this sort of scenario from time to time. I obviously couldn't test this extensively during my short stint with the phone, but I didn't notice any odd redraws or anything like that when I was using it. 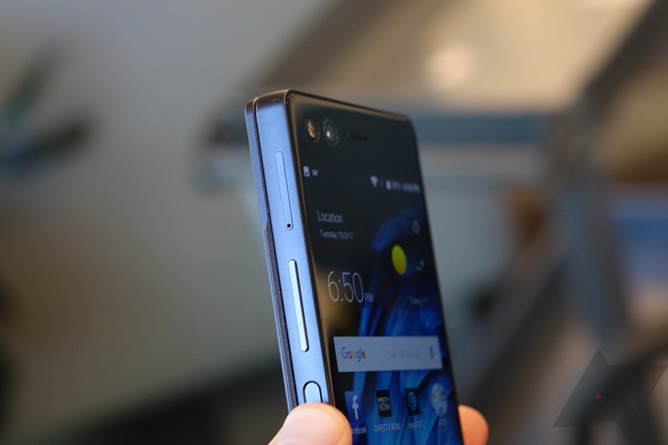 The one real usability gripe I had in this mode came down to the keyboard. You see, actually holding the phone when it's unfolded is already a bit awkward. It's not hard, per se, it's just a little weird. But the keyboard in A/B mode makes it much weirder, because it only appears on the side you're actively typing on. That means your hands are cramped up against a single end of the phone whenever you're typing - and that's especially cumbersome on the right side, because the left side of the Axon M is much heavier. I asked ZTE why it wasn't possibly to design a keyboard that would bridge both displays for a more natural layout that would avoid scrunching you up against one edge of the phone. I didn't get a good answer. I would guess that this is very hard to do for several reasons, but the fact that it's hard doesn't really change the reality that typing on a single side of the phone is an uncomfortable, suboptimal experience. 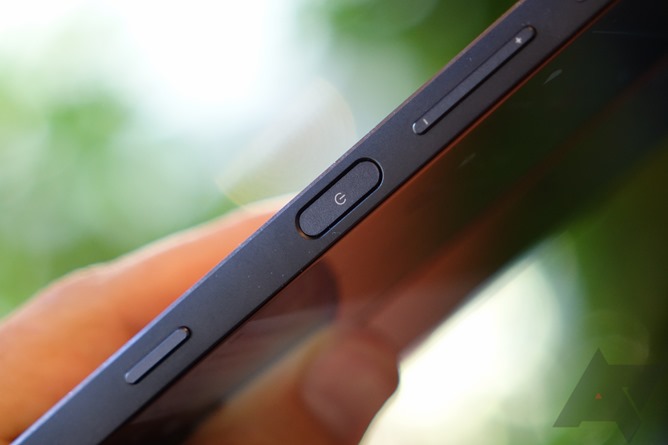 Switching between modes is accomplished via a dedicated button in the navbar, which I think was the right call on ZTE's part. You just tap the mode you want, and the displays will switch to it.

Performance was usually fine. I did find that switching between modes took a while occasionally, and that using the three-finger swipe gesture to change the screen an app appeared on was kind of janky and slow. Hopefully this can be optimized later. I know you probably have even more questions about the software (feel free to ask in the comments), but I've already gone on too long, I think. My overall impressions is that ZTE really did think about how people would use a dual-screen, foldable phone and has made changes to Android that make the dual-screen experience better.

Oh, the one question everyone will ask that I will answer now: Android 7.1.2. ZTE guarantees it will get Oreo. At some point.

The Axon M will be available internationally, but exclusively on AT&T in the US - no unlocked model will be sold here. That makes it a non-starter for most of you already, I know. Even if it were to be available more widely in America, I just don't see myself having an interest in actually buying this phone. For all the work ZTE has done to make the software both usable and useful, there are still rough edges, and I have a feeling that I didn't discover all of them during my brief time with the phone. My review will cover them in more depth.

This hands-on, though, is mostly about conveying the larger experience of using this very interesting, very different smartphone. I didn't want to get stuck on tech specs and the basics I might be more likely to cover in a typical post of this type. Instead, I wanted to see if I could tell you if ZTE's concept actually, well, works. It does! Mostly. More than I expected it to, even. The Axon M feels like a well-designed piece of hardware, especially given its rather ambitious dual-screen layout, and it tickles the geek in me to see ZTE build something like this. It's just kind of cool. OK, really cool.

The Axon M is easily the most polished, well-thought-out take on a dual-screen smartphone yet. Is that enough to make the concept commercially viable? I have a harder time with that, and my gut tells me "No." But maybe I'm wrong. I'm definitely itching to spend more time with this phone, just because it's so damn weird, and the sense I got while using it, largely, is that it's also not so weird that using it would be a chore or actively annoying.

It's compromised in some ways, sure. But at least it has a headphone jack. 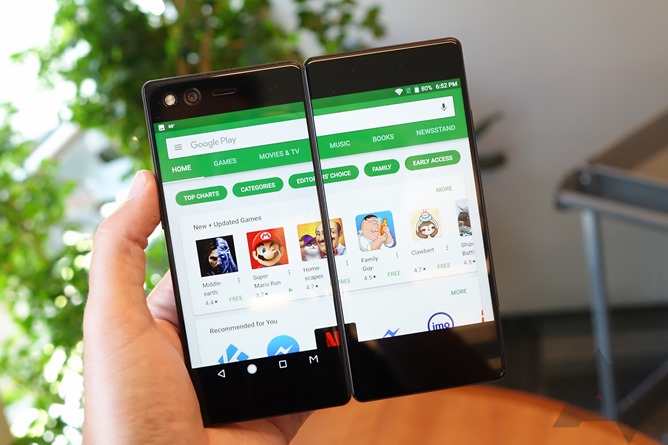