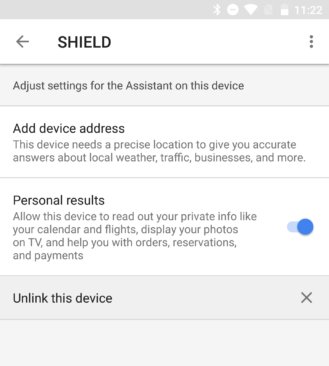 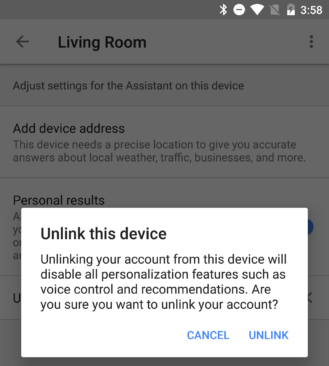 In case you're keeping count, we can now have Google Assistant on our phones, watches, laptops, televisions, and speakers. A couple of these are mostly personal devices, but a couple of them are more likely to be shared. If you ever decide that it's time to remove your account from one of those devices, you generally need direct access to it, or you can dig around in Google's web interface.

As a simpler solution, Google is also adding an option to the Assistant settings that allows you to unlink a device from your account with a few quick taps.

If you want to unlink a device, just go into the settings of the Google app, open Assistant settings, choose a device and hit the button to unlink it. At this time, only Android TV devices are supported, but a look through the app's resources shows that Google Home devices will have a matching button soon.

Assistant is coming to tablets

Google Assistant (the real one) launched with the first-generation Pixels and we always said 'when' while discussing an expansion to other devices, few of us seriously believed 'if' might be the better word. It came as a surprise when Google later announced that tablets were not going to receive Assistant, not even the Pixel C. The decision wasn't just given without an explanation, it started to look pretty arbitrary as Assistant later came to our watches, televisions, speakers, and even headphones.

Fortunately, this wasn't to be a permanent condition, and a clue from the latest Google app update demonstrates that tablets will be joining the line of Assistant-enabled devices. The two lines below are brand new and follow the naming convention of other device types that can support Assistant. The Pixelbook was already expected, of course, but it's the line for tablets that gives hope. Additionally, there is also a new icon to represent tablets in various screens in the Google app.

Obviously, these two lines don't give any sort of timeline for when we can expect Assistant on tablets, but at least we know it's coming.

Notification channels for your headphones

With the notable exception of Smart Lock, it wasn't until recently that the Google app paid any serious attention to headphones. Now that there are wireless earbuds and headsets coming to market with Assistant built in, it seems like this is all we hear about. To accommodate the many new notifications that come with owning the new headsets, there are a couple of new notification channels. They are aptly named for their urgency: Important and Informational.

I don't have a pair of Assistant-enabled headphones, so I'm not sure if these channels aren't actually live yet or if they only appear if you've paired headphones to your device. I expect the latter, so if you have a pair and don't like the defaults, you may want to pop into the notifications screen and make a quick change.

If you're making much use of the Recent screen, it looks like there might be some more diversity coming to it soon. At present, it really only acknowledges web searches, but it looks like it might be expanding to support some new searches, including: documents, music, and videos.

A toggle for interests

If you're not a big fan of having "interests" showing up in the feed of the Google app, it looks like you'll soon have the option to turn them off. Interests are the various topics that appear within the Customize screen (found in the nav drawer), and they generally dictate the type of news articles and other cards that appear in your feed.

Since the setting isn't live yet, at least not for me, I'm only guessing that it will remove the 'Stories to read' section and possibly any other card based on the interests in your profile. I doubt this will affect things like weather and travel info, but it's hard to be sure.

Tip: Get the ding sound after your "OK Google" command by enabling one accessibility service