During a keynote speech at an event in Munich today, which was also streamed live on YouTube, Huawei has announced its latest flagship phones, the Mate 10 and Mate 10 Pro. Huawei CEO Richard Yu took to the stage to present the new hardware, which features the company's new Kirin 970 SoC. It includes a Neural-Network Processing Unit that offers AI-based enhancements and machine learning capabilities.

Both devices have all glass designs with thin bezels and screen-to-body ratios even higher than the iPhone X, as Mr. Yu was very keen to point out. Adhering to the 2017 trend that only Google seems to have bucked, the new Huawei phones have dual camera setups that sound impressive on paper. Let's find out more about each device. 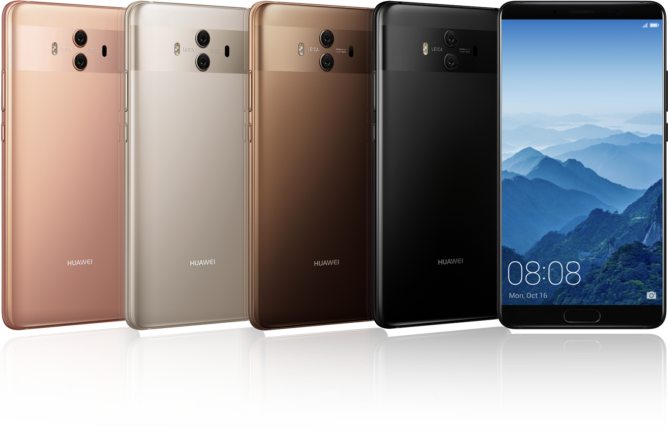 The standard Mate 10 has a 5.9" QHD screen with a traditional 16:9 ratio. It supports HDR10 and vivid colors, and it also leaves room for a fingerprint scanner below the display. Both the Mate 10 and the pro version feature the same Leica camera module, consisting of a 20-megapixel monochrome sensor alongside a 12-megapixel color sensor. Take a look at the full specs for the device below. One thing that stands out is the huge 4,000mAh battery. 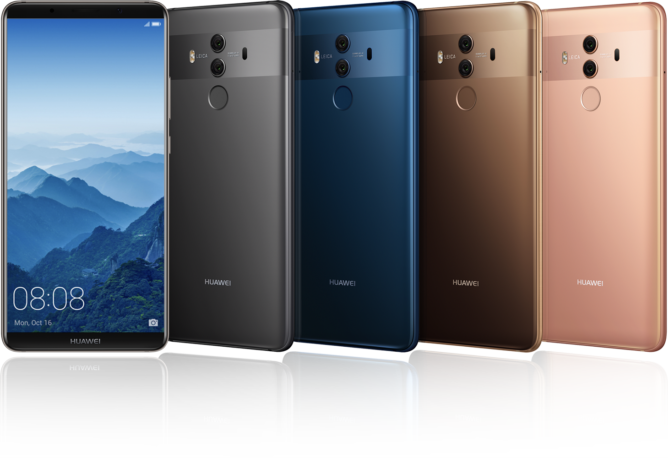 If you go for the Pro model, you're getting many of the same specs as the Mate 10, with a few exceptions. The Mate 10 Pro has a taller, 6" screen, with a 18:9 ratio, just as you'll find on most other 2017 flagships, and very small thin bezels. Because of this, the fingerprint scanner has been moved to the back. The display on the Pro is actually lower-resolution than the Mate 10, at 2160x1080 pixels, which Yu said was all that was necessary for the size of the phone, also pointing to improved battery life as a trade-off. While that does make a lot of sense, it's odd to see the Pro version be beaten in specs, especially for display resolution.

The full specs for the Mate 10 Pro are below. Just as before, there's a version made in collaboration with Porsche Design, although it's practically just a Mate 10 Pro with a few minor tweaks. The design is obviously refined to the car manufacturer's taste, with only a 'Diamond Black' color option, and apparently the user interface is also Porsche branded. Other than that, only the memory/storage configuration sets the specs apart, with 6GB RAM/256GB ROM as the single option. 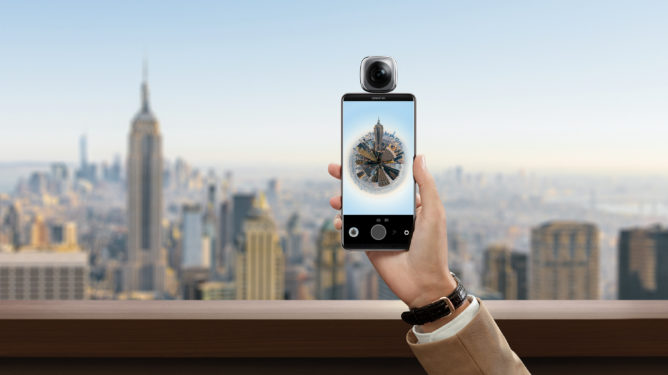 In addition to the phones, Huawei also announced three new accessories. The first is the EnVizion 360 Camera, which can shoot 5K photos and 360-degree 2K videos. Also available will be a SuperCharge power bank for fast charging on the move, and a smart scale that can track your body fat percentage and BMI through a corresponding app.

The Huawei Mate 10 will be available from the start of next month for €699 (around $825) in regions including Spain, UAE, Saudi Arabia, Malaysia, Singapore, and Australia. The Mate 10 Pro will go on sale in mid-November for €799 ($943) and will be available in many more countries, including the UK, Germany, France, Italy, UAE, Saudi Arabia, Malaysia, Singapore, and Thailand. The Porsche Design Mate 10 will also be available starting in mid-November, but it will set you back a whopping €1395 ($1646). You can find out more about the new Mate 10 series on the Huawei site.

Ryan has already spent some time with the Mate 10 and Mate 10 Pro if you want to read what his initial impressions were.

Hands-on with the Huawei Mate 10 and Mate 10 Pro: Plugged into the smartphone zeitgeist

Google rolling out anti-virus feature for Chrome on Windows