In just a few years Huawei has gone from a brand unfamiliar to consumers outside of China to the world's second largest smartphone maker. Even if you've never owned a Huawei phone, there are people around you who do. The company's Mate 9 flagship launched in the US in early 2017, and speculation about the Mate 10 has been picking up recently. The phone has finally been revealed today in Munich—or rather, the phones have been revealed. The Mate 10 will come in two flavors: the standard Mate 10 and the Mate 10 Pro.

I had a chance to get my hands on the Mate 10 (on the left) and Mate 10 Pro (on the right), and one thing is immediately clear when you pick up these devices: Huawei knows how to build a smartphone. The design is elegant, and the build quality places Huawei in the same group as Samsung and Apple. At the same time, Huawei has made some hardware decisions that will probably aggravate smartphone buyers, especially with the Mate 10 Pro.

The Mate 10 packs a 5.9-inch 1440p LCD not unlike the one on the last-gen Mate 9. It's still a 16:9 ratio panel, but Huawei says the brightness has been boosted by 40% to 730 nits. That's impressive for an LCD, and I can confirm it gets incredibly bright in person. The phone is pretty wide, so it's not very easy to use with one hand. The Mate 10 Pro has a slightly larger 6-inch panel, but it doesn't feel larger. That's because this screen has a taller 18:9 aspect ratio, so the narrower frame makes it easier to handle. This panel is also an OLED, but in the first of several perplexing decisions, the resolution is only 2160x1080—a taller 1080p. The Pro's display looked bright and vibrant to me, but there's also some visible fuzziness from the OLED matrix when you look really closely. 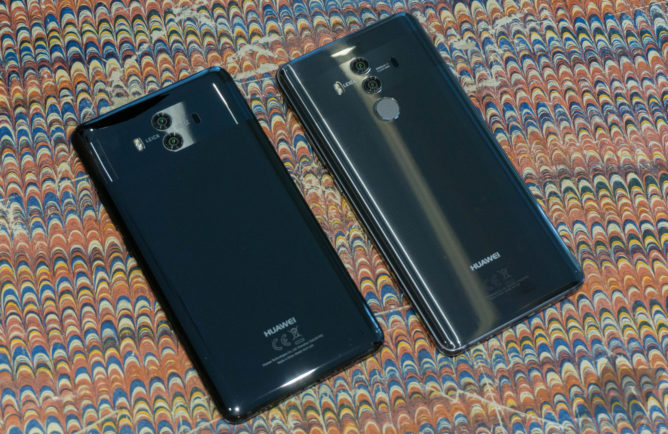 Inside is a Kirin 970 SoC, which Huawei unveiled a few weeks ago. In addition to CPU and GPU cores, this chip has what the company calls a Neural Processing Unit (NPU). It's basically a dedicated piece of silicon for AI on the device. As a result, the Mate 10 includes some interesting AI software features that I'll get into a bit later. There's also 4GB of RAM in the regular Mate 10 and 6GB in the Pro. Both phones are dual-SIM, and both SIM cards can connect to 4G networks. For storage, you've got 64GB in the standard model and 128GB in the Pro. Strangely, the Mate 10 has a microSD card slot, but the Mate 10 Pro does not. Again, why is this called the "Pro?"

I have to hand it to Huawei; it's definitely plugged into the zeitgeist of smartphone design. These phones are very "2017." The Mate 10 phones are curvy, sleek, and made mainly of glass. I've been clear about my feelings on glass phones (I'm not a fan), but not everyone agrees with me. So, let's look at these designs with some objectivity. The rear glass panel is slippery, but the way it joins up with the aluminum frame shows off Huawei's industrial design expertise. The glass is curved on all four edges, eliminating all the bits that could poke you uncomfortably while holding the phone. It sort of feels like a polished stone. 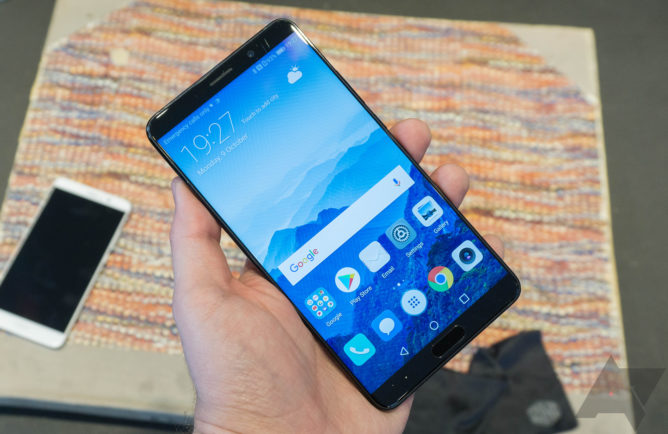 The fingerprint sensor has moved to the front of the Mate 10, but the Mate 10 Pro keeps it on the back where it ought to be. The Pro does have ever so slightly slimmer top and bottom bezels, but there's a Huawei logo crammed on the front where the other phone has the sensor. It doesn't look as awkward in person as I thought it would, but that's two Huawei logos on the Pro versus just one on the regular model. Both phones have smaller bezels than the Mate 9, though.

Again, we have dual cameras with Leica branding. There's a 12MP RGB camera paired with a 20MP monochrome sensor. These modules work together to sharpen images and offer 2x zoom. These cameras have a huge f/1.6 aperture, which should pull in plenty of light. However, optical stabilization is available on the RGB sensor only. To add a little visual flair to the back of the phone, there's a reflective foil effect in a stripe across the cameras. Huawei says a Porsche edition of the Mate 10 Pro will launch later with a vertical stripe instead of horizontal. On the top is an IR blaster, which is unusual to see these days. 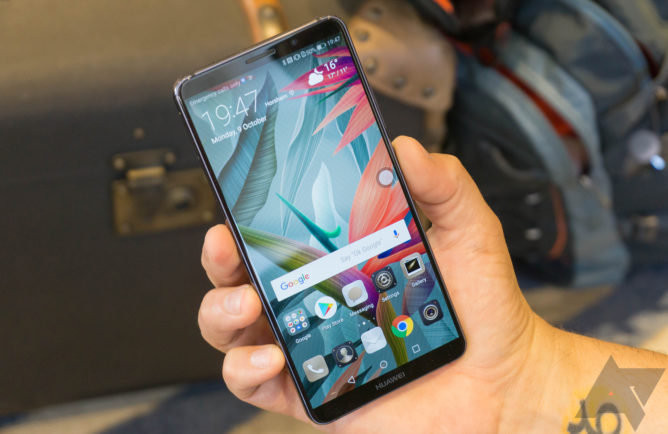 Both phones charge via USB Type-C with Huawei's Super Charge standard for a maximum speed of more than 20W. The phones also have huge 4,000mAh batteries just like the Mate 9. That phone had incredible battery life, and I expect the same from the Mate 10 series. I obviously wasn't able to confirm that during my limited time with the phones. The Type-C port is joined by a headphone jack on the Mate 10, but for some reason, Huawei opted to remove the jack on the Mate 10 Pro. It comes with a digital USB-to-headphone adapter instead. That's a bummer, but the Mate 10 Pro has the advantage of being IP68 water-resistant. The regular one isn't.

Huawei is coming out of the gate with Android 8.0 Oreo on the Mate 10 series, and it's pretty proud of that. So proud, in fact, the new version of EMUI has been bumped from 5.1 to 8.0 to match. The NPU in Huawei's new Kirin 970 drives several big components of the EMUI 8 software. For example, the Mate 10 will have built-in support for text and verbal translation via Microsoft Translate. The phone can also adjust the display's color based on ambient lighting to make it more comfortable to look at. This all happens on the phone with the NPU rather than being outsourced to the cloud.

The NPU also powers a new camera feature. As you move the viewfinder around, the Mate 10 identifies what you're pointing it at. Then, the camera engages different shooting modes automatically. It can spot things like food, flowers, text, dogs, outdoor landscapes, people, dogs, and so on. Huawei is keen to point out this happens in real time on the device without any data going to the cloud. The phone is surprisingly good at figuring out what you're shooting. I pointed the camera at a flower, and it instantly popped up the flower icon in the corner to indicate it had switched shooting modes. The same thing happened when I pointed it at a plate of fruit, but in that case it correctly identified food. I can't say for certain if the shooting modes will do any good, but the first part of the equation works as intended. 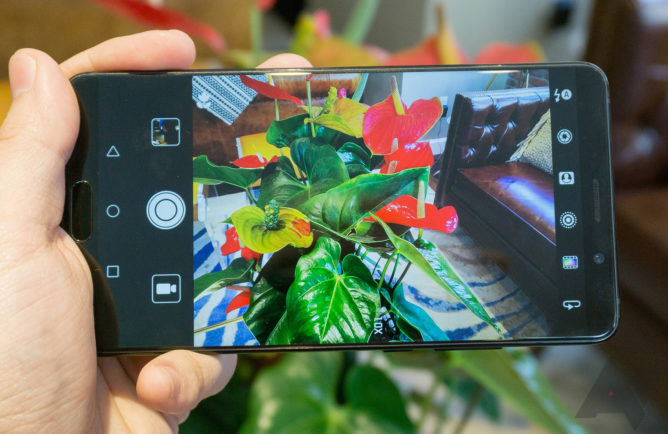 The Mate 10 correctly identifying flowers (note the icon in the upper left corner).

EMUI 8 also includes quick access to split-screen mode for apps—there's a button in the peeking notification. Just tap that, and you can drop the app into split-screen mode with whatever else you have open on the other half. It wasn't clear during the hands-on, but this might only work with Huawei's stock apps. The included apps will also have new multi-column modes for landscape orientation.

My time with the Mate 10 and Mate 10 Pro was not marred by any slowdowns or lag. These phones seem every bit as fast as the competition, even with the fancy AI stuff going on in the background. The navigation buttons have gotten a little bigger, too, which many will consider an improvement. Past Huawei phones had weirdly small, cramped on-screen buttons. The Mate 10 Pro defaults to having no navigation buttons visible, but there's a single floating button that can be used to trigger home, back, and overview with taps and gestures. I didn't find this to be a particularly compelling experience, but it might just be a matter of having time to adjust. You can turn the buttons back on if you like, or have both navigation interfaces running at the same time. 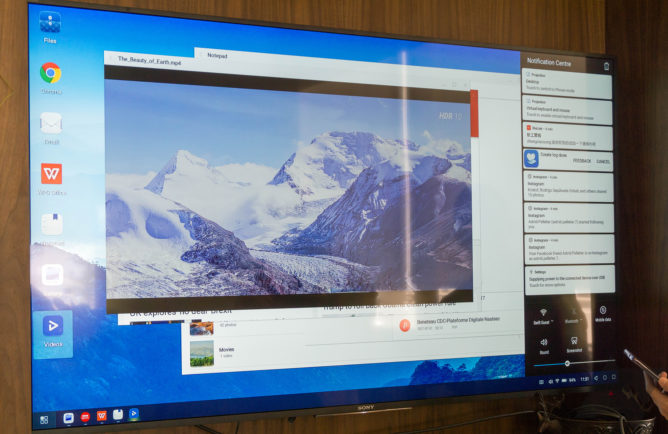 The desktop mode in action

As rumored, Huawei has designed its own version of Samsung's DeX desktop UI, but it doesn't require a dock. All you need is a Type-C cable that supports video output, either by Type-C or DisplayPort. Huawei was a bit unclear on which cables would work, but there will apparently be a list of certified cables available later. When you plug one of these cables in, you get a surprisingly Windows-like interface with windowed apps, a taskbar, a notification center, and "start" menu. All your apps and data are available in this interface, but third-party apps will be a bit hit or miss. This worked very well in the demo. The phone was able to load content in one app while playing video in another window, and there was no discernable lag.

One clever twist here is that you can keep your personal notifications private on the phone rather than have them appear on the projected display for everyone to see. The Mate 10 itself can act as your keyboard and mouse for this UI, but you can also pair two Bluetooth devices simultaneously thanks to another Huawei mod.

The Mate 10 and Mate 10 Pro look like they can compete with the best of Android phones. The design is attractive, and Huawei's software has come a long, long way. And a 4,000mAh battery in a phone? Yes, please. I don't personally love glass phones, but some of the most popular devices in 2017 sport glass backs. I guess Huawei is just giving the people what they want.

EMUI 8 makes a lot of big promises about on-device AI, but I don't know that these are compelling reasons to get the Mate 10 over something else. The Mate 10 Pro also seems less appealing than the regular phone in several important ways—the display is lower resolution, there's no headphone jack, and no microSD card slot. 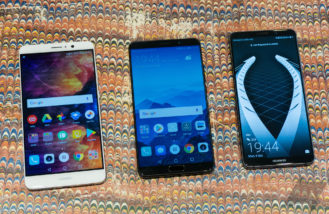 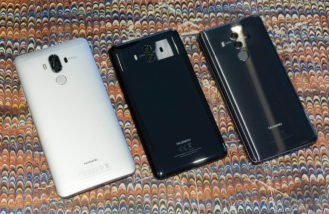 Pricing and availability will be key, and those are both things Huawei is keeping to itself. We should get international pricing and launch details today, but the US data will come later. All I could ascertain is that the Mate 10's cost would be in the same ballpark as the Mate 9 (around $500), and the Pro will be somewhat higher. I suspect both models will be available in the US eventually.