News of the Xperia Touch has been trickling out slowly over the last two years. The original projector was only a concept shown off at MWC in 2016, but it became quite real earlier this year. In fact, just a few months back you were able to pick one up in Europe for €1499.99. Now it's come over to this side of the pond in all its touch-sensing majesty for the kingly price of $1,699.99.

The Xperia Touch includes a 100-lumen laser projector that can spit a 23"-80" HD (1366x768) screen onto flat surfaces. It uses a 13MP Exmor Rs 60fps camera with infrared sensors to pick you your taps and swipes, so whatever surface you project it onto is a 10-point multi-touch compatible touchscreen, too.

As the Xperia moniker might imply, it's a fully-functioning Android device with access to the Play Store so it can use all your favorite apps and games. The $1699.99 price tag is a bit steep, especially considering the battery only lasts "up to an hour" on a charge, but the novelty and versatility might be useful for some. 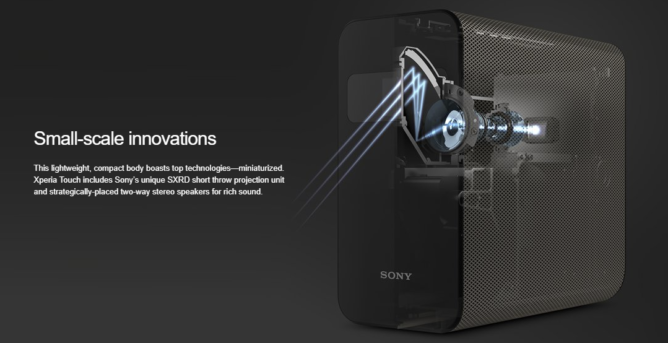 Specs are a bit of a mystery. It has 32GB of storage, a 1300mAh battery, Android N, a "presence sensing" ability to know when you approach, and HDMI and USB-C outputs. But we aren't sure what SoC is being used, or precisely which version of Android it runs. Sony's spec sheet leaves a lot to be desired.

Interested? You can pick it up over at Amazon (though it's in an out of stock pre-order at the time of writing). According to Engadget, it's also available at the Sony Square display room in New York, and some T-Mobile stores in a few major cities.