Yesterday the Taiwan FTC (Fair Trade Commission) fined Qualcomm an incredible $773 million (TWD 23 billion) for allegedly violating antitrust rules in the country over the last seven years. In a press release posted yesterday, Qualcomm says that it disagrees with the decision and intends to seek a stay while appealing. This is after both the Korean FTC imposed a fine of $854 million and the US FTC leveraged its own charges against the chipset manufacturer earlier this year.

Qualcomm's been involved in an incredible number of high-profile lawsuits recently. Perhaps in a pre-emptively defensive move, the company has also been engaged in a (slightly cringey) major public advertising campaign across the United States.

This latest fine for anticompetitive practices might seem like an incredible number, but since Qualcomm collected over $13 billion USD (TWD 400 billion) in licensing fees from Taiwanese companies alone over the last seven years, it's barely a slap on the wrist. The Taiwanese regulators claimed that Qualcomm "abused its advantage in mobile communication standards [and] refused to license necessary patents." In addition to the fine, Qualcomm has been instructed to change the terms of any existing agreements with companies that previously included price, names, shipment, model name, or other potentially sensitive information.

Qualcomm has stated that it believes the fine "bears no rational relationship to the amount of Qualcomm’s revenues or activities in Taiwan." The company disagrees with the decision and intends to seek a stay while it appeals the decision in the Taiwanese judicial system. We'll have to wait and see if anything changes after Qualcomm's appeal. 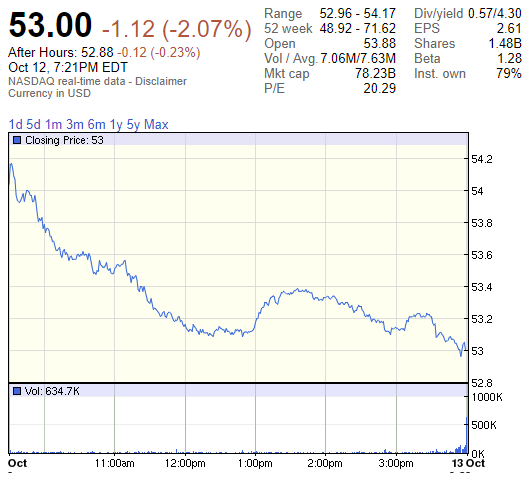 Qualcomm's stock (QCOMM) is trading at around $53 a share, down ~2% from $54.33 since the news hit yesterday. Just the day before, the company announced a quarterly cash dividend of $0.57 per share, but this fine appears to have destroyed most of the gains Qualcomm's stock saw.

[Update: Get your movie while it's hot] Deal alert: Amityville: The Awakening will launch ...