This October's update isn't just about security patches, it also has some much-needed Bluetooth fixes. Unfortunately, some of us are having trouble actually installing this latest OTA. The difficulty seems to fall into two basic categories: those who haven't yet unenrolled from the beta and can't see the update, and those who can see the update but can't install it. The former is an easy fix (just exit the beta), but for those of us in the latter camp, Google is looking into it.

Both Android Police's Artem and I ran into this issue on our Pixel XLs, and according to statements on Google's Product Forums, we aren't alone. It doesn't appear to be too widespread, and reports so far seem to indicate that only Pixel XLs are experiencing the problem, but it is possible that other devices could be affected. 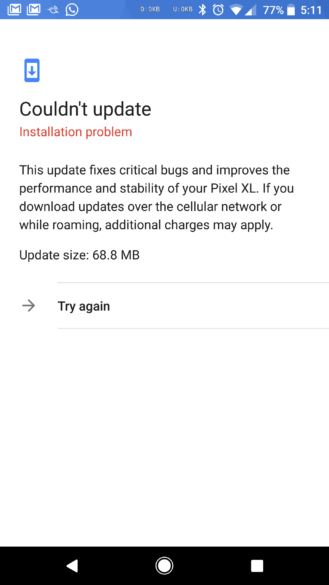 The screen those affected see when updating

From what we can tell, the cause isn't entirely determined. A Googler on the forums is still collecting logs from those with the problem, but there is a working solution. If you've resolved to install the update before Google delivers a fix for these October OTA troubles, you can sideload it as described on the OTA image page.

Artem used that solution on his device, but I'll be waiting a bit longer to see if another fix presents itself.

[Update x3: Now in Chrome Dev] Chrome's flags page is getting a makeover