Amazon last updated its 10-inch Fire HD tablet in 2015, but today the recently announced refresh goes live. It looks more like the other new Fire HD tablets, and the price is $80 less than the old Fire HD 10. It can be yours for $149.99 on Amazon right now, but that includes the customary Amazon "special offers."

The Fire HD 10 includes a number of improvements over the older tablet. The display resolution has been bumped to 1920x1200, although Amazon is advertising it as "1080p full HD." You also get 32GB of storage in the base model (with a 64GB upgrade for $40), 2GB of RAM, and a faster quad-core MediaTek chip. The chassis is made from the same textured plastic as the recently refreshed 8 and 7-inch tablets, and it comes in several different colors. 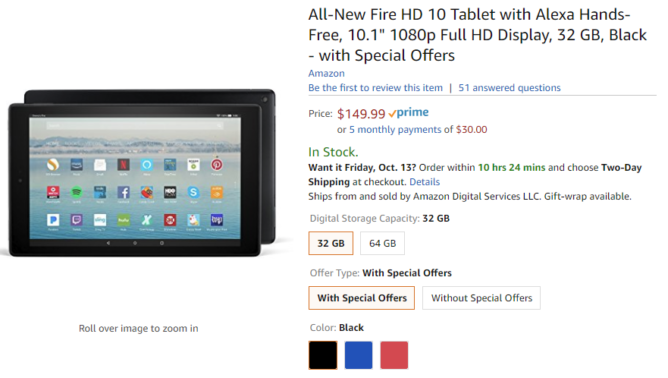 The early reviews are solid, citing the tablet's price as the main selling point. It's $80 less than the old HD 10, which was launched at a time when the iPad was a much more expensive device. The $329 iPad certainly eroded Amazon's hold on the budget tablet market, but the new Fire HD 10 could help it regain some ground.