For such a small platform, there are a surprising number of different Android Wear watches on the market. Traditionally non-techy brands like Michael Kors, Diesel, and Tag Heuer all sell smartwatches powered by Google's wearable OS. Nixon is one of those brands, and now offers its Mission watch with stainless steel bands.

The Mission with its plain-jane silicone band was already a pretty handsome watch, but its chiseled face didn't match the rather dainty strap. However, the stainless steel models, dubbed the Mission SS, seem to have fixed that. The bands, which come in black, silver, and gold to match the watches' faces, are described by Nixon as "custom 23mm solid stainless steel free-swing 3 link bracelets" with "solid stainless steel double locking clasp[s]." They definitely enhance the Mission's appearance, making the whole thing look and feel more rugged. Unfortunately, opting for the stainless steel band loses the option to use the cool Moto Maker-esque customization tool (which cost $50 extra for the standard Mission). 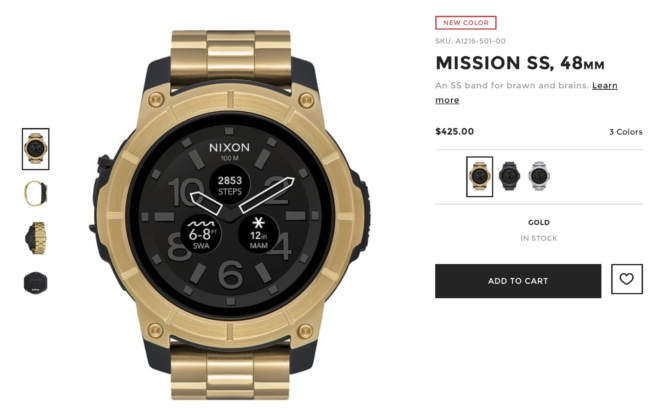 As far as we can tell, Nixon actually began selling the Mission SS in August, but nobody noticed the addition. But if you're interested, a Mission with a stainless steel band will run you an extra $25, making it $425 in total. That's a lot for an Android Wear watch, but if you were already going to spend $400 on a regular Mission, the extra $25 for this much nicer band is a no-brainer. You can check international pricing by going to the top left of Nixon's site and selecting your region and country, but the Mission SS is £389 in the UK and €450 in most of Europe.

[Update: Bluetooth 4.2, AAC] Google Pixel Buds charge over USB-C, can use Assistant and do ...

Here are all the new Home and Assistant-related features that Google announced at its October ...