Manufacturers are gearing up to bring Android 8.0 Oreo to devices, but we frequently forget that there are plenty of them still being sold right now that haven't had a taste of Android 7.0 Nougat. Up until just recently, Verizon and T-Mobile's Samsung Galaxy Tab E were among the devices stuck on Android 6.0 Marshmallow. But now those of you with carrier-branded units can enjoy all the features Nougat brings. This applies to Verizon 9.6" or 8" models, as well as the T-Mobile 8" model. 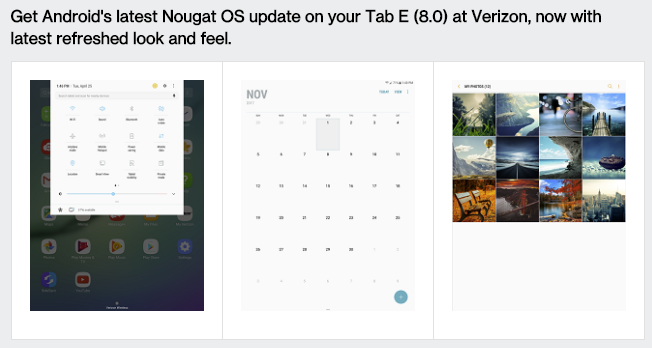 Separate from all the Nougat-related changes, customers with a Verizon Tab E also get a new "Effects preview screen" for previewing filters when taking images. The Verizon update brings things to the August patch level, so it isn't immediately clear if Blueborne fixes are included. Software versions for this update are NMF26X.T377VVRU1CQH9 (Tab e 8.0) and NMF26X.T567VVRU1CQHD (Tab E 9.6)

Verizon's changelog is too big to post here, but my shorter paraphrased version is just below:

The T-Mobile Galaxy Tab E is also getting some love. The baseband version for the update is T377TUVU1BQI5, though we don't know the precise build number. T-Mobile hasn't posted a full changelog for its OTA outside a single blurb stating "Update to Android 7.0 (Nougat) Google security improvements."

Installing the update should be pretty simple, but the workflow is to head to Settings -> About phone -> Software updates -> Check for Updates. If it finds an update, tap Download now, and you should be on your way.

[Update: Bluetooth 4.2, AAC] Google Pixel Buds charge over USB-C, can use Assistant and do ...