Android Wear isn't an especially popular platform these days, but plenty of people still use it - enough for Google to have released two new smartwatches, the LG Watch Sport and Watch Style, earlier this year. But just eight months after their release, the Android Wear page has disappeared from the Google Store's home page. And more interestingly, both the Watch Sport and Watch Style are now marked as "no longer available."

A lot of stuff was introduced today: the Pixel 2 and Pixel 2 XL, the Pixelbook, Home Max, Home Mini, Google Buds, Google Clips, and the new Daydream, and the Google Store got a bit of a redesign to freshen things up. However, it seems like the Android Wear page got lost in the shuffle - or did it? 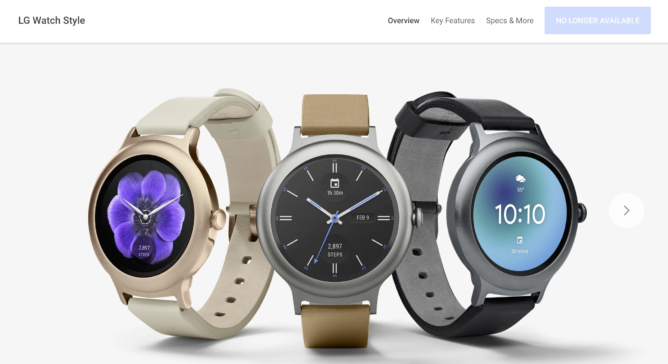 At first glance, it looks like Google may have just forgotten to re-add the Android Wear page to the homepage's heading, as the page itself is still accessible via a Google search. But snoop around on that page for just a few seconds, and you'll notice that something is wrong. Both the Watch Sport and Watch Style's listings are still there, but show up as "no longer available." That's different from "out of stock," which just means that Google's run out of units temporarily and will restock soon. "No longer available" makes it seem like these eight-month old watches have been completely discontinued. On top of that, if you try to access the MODE watch bands page, you're automatically redirected to the Google Store homepage. It's totally bizarre.

Is Google giving up on Android Wear all of a sudden? Given the fact that an 8.0 Oreo beta program just opened up for the Watch Sport, that doesn't sound right. In any case, taking products as new as the duo of LG watches off the market is definitely an odd move. We've reached out to Google for comment.

As we'd suspected, all hardware that isn't made by Google itself (aside from accessories and Nest) has been dropped from the Google Store. Hoi Lam, a Googler who works on Android Wear, confirmed this, and that it had been in the works for a while. New storefronts like Amazon's have been custom-made for Wear.

Don't be sad! 😊 The Google Store team made a change that they will only stock Google made hardware. 1/

Our team knew the plan for a year now and invested in custom store fronts with online retailers, e.g. https://t.co/ARBUBReHbq 2/

Together with all our partners (online / offline), we will reach more people all over the world than ever before!🗺️😎⌚ 3/

When I visited partner stores in London and Shanghai, they couldn't be more excited about our line up this fall!😊https://t.co/pCMtnDWl64 4/

On the technical front, I have more to share about how we think about updates - stay tuned!😎⌚ end/

[Update: T-Mobile also has it now] LG V30 is now available to order in the US from Verizon or AT&T