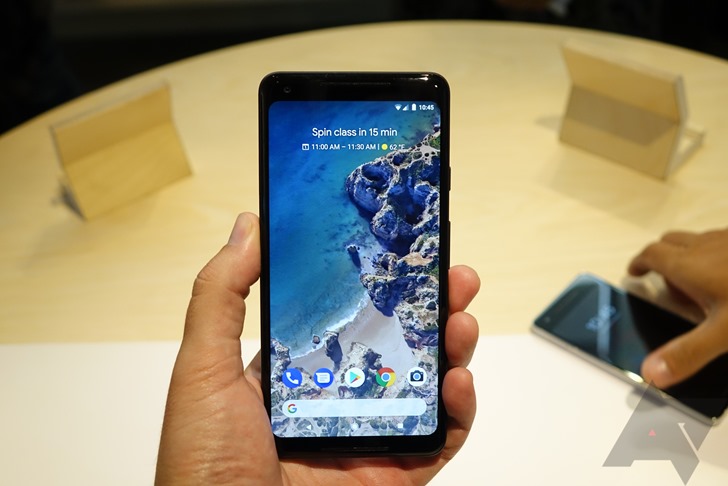 Instantly, the new Pixel feels more refined to me than the last generation. The edges are softer, more subtly blended into the frame, and even the now shrunken-down glass antenna window just looks a lot more well integrated into the design of the device. I don't think Google will have Apple or Samsung sweating with the newest Pixels in terms of overall hardware design or fit and finish, but they're definitely an improvement over 2016's models. 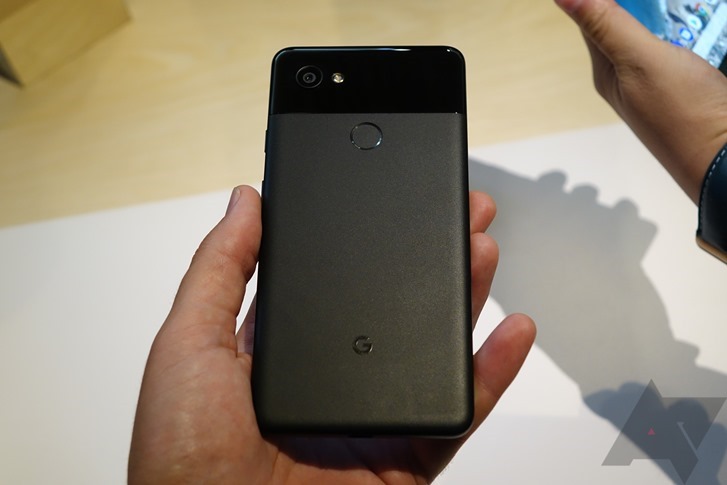 As you know, there's no headphone jack on either new Pixel model, but Google hopes to offset that with a USB-C adapter in the box (this sucks), as well as the addition of IP67 waterproofing and dual front-facing stereo speakers (both of which are welcome). The XL sports a 6" OLED display at Quad HD resolution at an 18:9 aspect ratio, with 3D Corning Gorilla Glass 5. 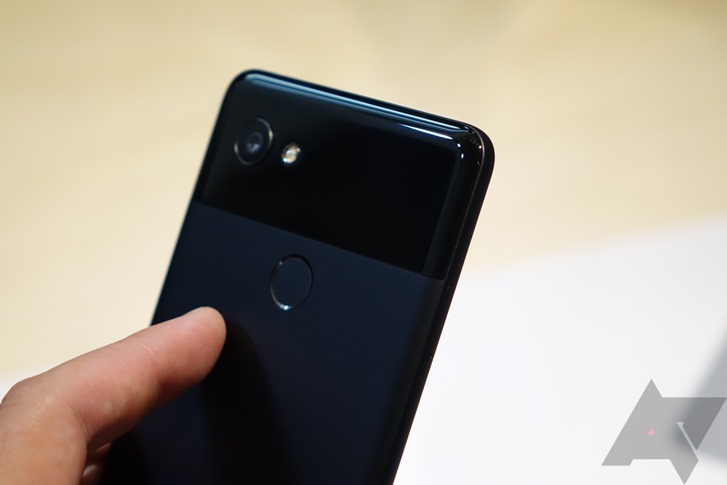 The LG-made OLED display looked nice to my eyes, and includes a circular polarizer so you can actually use it while wearing sunglasses (according to Google). Much has been said of the mottling or banding effect on the screen of LG's new V30, and the Pixel XL presumably uses a similar, if not identical, panel. The demo area lighting made it hard to get a good look at the screen in low light, but I was able to see some of the banding I've observed on my pre-production V30 devices. That said, this banding is basically invisible at normal brightness levels, and I don't anticipate it will be an issue for most people.

The phone seems basically the same size as the 2016 XL. A look at the tech specs reveals the 2 XL is around 1mm wider and 3mm taller than its predecessor, which really shouldn't be something you'd notice. It's also around 7 grams heavier which, again, I doubt anyone is going to really perceive. 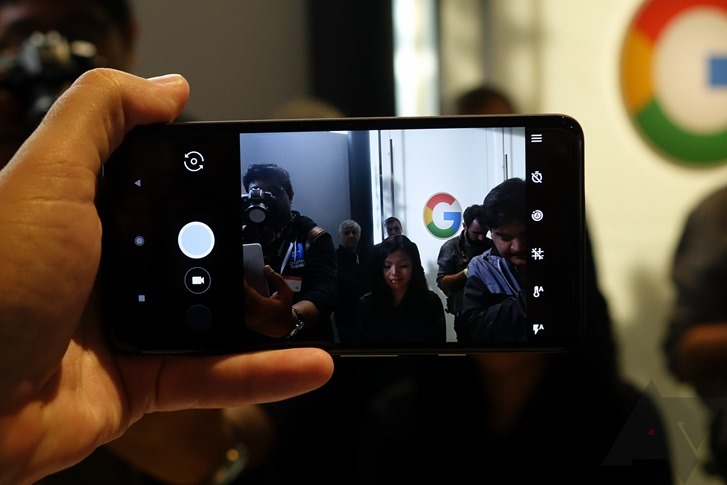 There's a SIM slot on the left of the phone (yes, the new Pixels support eSIM, but still have traditional SIM slots), and the power and volume keys are on the right. There's a new fingerprint scanner which Google says should be the fastest one on the market, but I wasn't about to register my prints in a crowded demo area just to find out — I'm going to trust it's pretty damn quick if they say it is.

I wasn't able to take a close look at the cameras, but I can say they launch as quickly or perhaps even quicker than last year's phones, which already were insanely snappy snappers. Oh, and both new Pixels have OIS on the rear camera.

On the whole, the 2 XL hardware feels like a marginal upgrade in most ways, including ones that I feel really matter (fingerprint scanner, waterproofing, speakers, bezels, optical image stabilization). 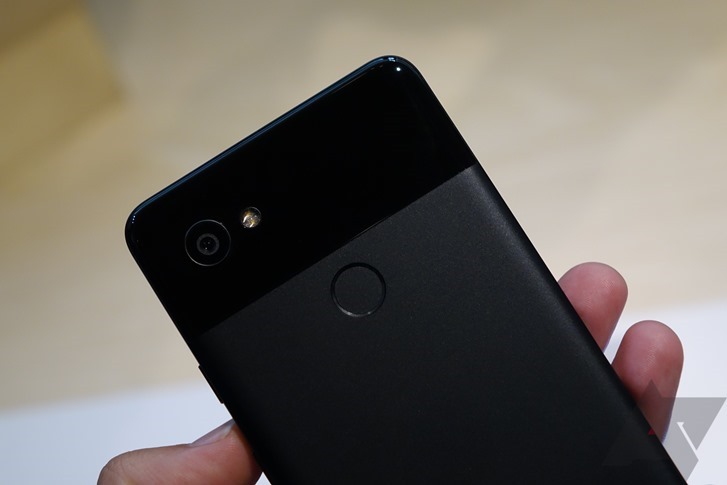 It's Oreo. If you've used a Pixel before, you're familiar with the software on the new Pixels, as not much has really changed. There's a redesigned launcher, which is definitely the single biggest difference, and my initial impressions there are positive. The new launcher moves the search widget to the bottom for easier access, a smart move given the longer 18:9 aspect ratio of the 2 XL's screen. There's also a very lovely new live wallpaper design, but I assume that'll be coming to the Google Wallpapers app shortly. 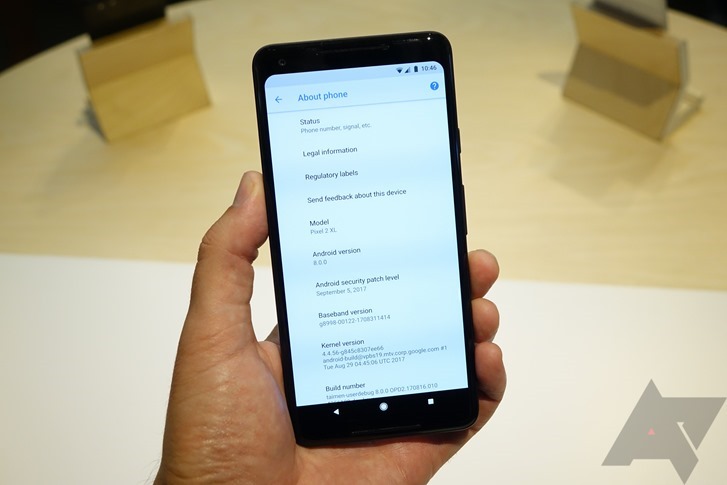 The app drawer has seen some small stylistic tweaks (like a pill-shaped search bar), and there's now an appointment and weather widget at the top of the homescreen. I didn't have much of a chance to look at the always-on display, but speaking of always-on, the new Pixels are always listening - for music. They'll identify "tens of thousands" of songs completely passively, and the identification happens locally on the device, so it won't eat through your data (or your battery). 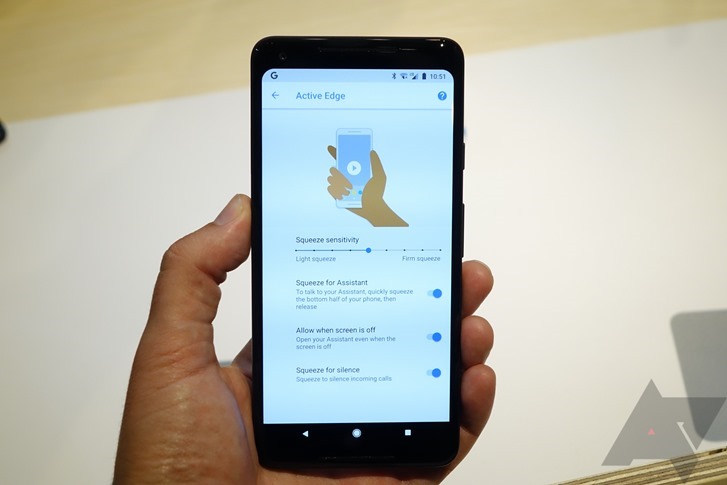 You may be curious about Google's newest way to launch the Assistant, Active Edge. Having used Edge Sense on the U11, I can say the Pixel's implementation is basically similar. You can adjust the squeeze intensity threshold in settings, turn it off (important!), set it to work when the screen is off, and use the squeeze gesture to silence incoming phone calls. It works basically like Edge Sense, and I feel I'm about as likely to use it (not very).

Without spending more time with the phone, I don't really want to say much about performance or small changes - I just really took a cursory look at most things. 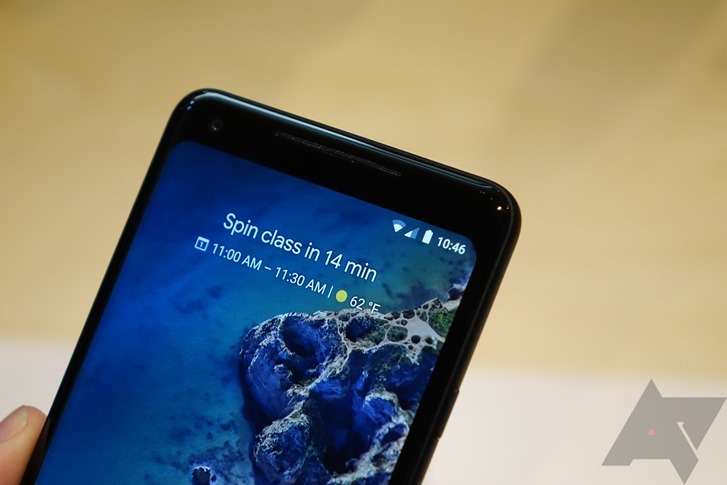 The Pixel 2 XL feels like a competent and worthy successor to the original XL. It addresses some of that phone's pain points (waterproofing, speakers, bezel size, OIS), and while it's hardly revolutionary, I'm almost positive I'm going to really like this phone. I already do. After all, I loved the first XL, and this really just seems to be an improvement on that phone in every way - sans headphone jack.

Whether Google has built something that should have Samsung and Apple worried is another question entirely. I really don't think the 2 XL takes many chances, and even things like Google Lens won't remain exclusive to the phone, so it's hardly going to help the Pixel stand out. As I said, the Pixels' biggest challenge is that, like every other Android phone, they're just Android phones.

2017 is definitely the "tock" to 2016's "tick" for the Google Pixel team. That said, if you held off on a Pixel last year hoping for improvements, 2017 delivers, and the 2 XL in particular evolves Google's flagship smartphone in meaningful, practical ways. It's not going to set the smartphone world on fire, but I don't think it needs to: as long as Google can build enough of them and keep up its ad barrage, I think the new Pixels make a good case to consumers looking for an alternative to Apple, Samsung, or other manufacturers. Fast updates, an uncluttered interface, great cameras, and competent smartphone basics are the bread and butter of Google's in-house devices. Eventually, they will need to do more to set themselves apart from the crowd in an increasingly commoditized industry. For now, though, the 2 XL feels like the "pretty good phone" Google needed to build to stay relevant. 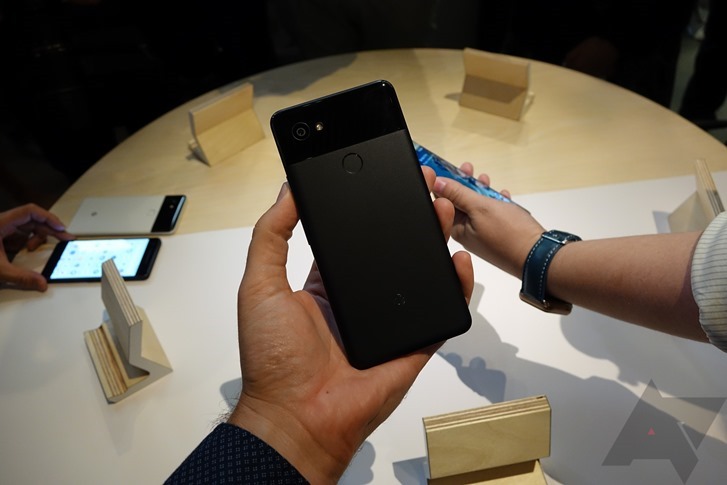 New Pixel Launcher home screen moves search to the bottom, adds "at a glance" section to the top