Most phones released in recent years have used nanoSIM for carrier information, but there were rumors as the Pixel 2 unveiling neared that Google's phones would have an eSIM instead. According to Google's specs, the Pixel 2 does indeed have an eSIM. However, there's also a nanoSIM slot. 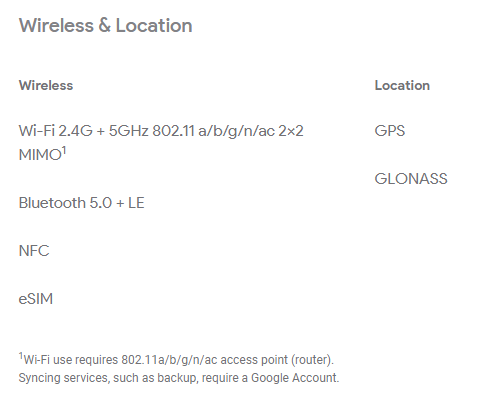 The Pixel 2 and Pixel 2 XL will be the first phones with eSIM support as far as I'm aware. An eSIM (or embedded SIM) is built into the phone rather than being a removable card. It takes up less space and can make switching to a new phone simpler as there's no physical card to juggle. However, not all carriers support eSIM yet, and we're still in the early days. If you switch between devices, most of which still use regular SIM card, eSIMs would end up being a bit of a pain.

We've confirmed with Google that the Pixels do indeed have both SIM card standards—it's not a typo. The eSIM is being used with Project Fi for now, but it might expand to carrier partners (i.e. Verizon) later. We're not sure about the possibility of dual-SIM functionality down the road, but that seems like a long shot for the Pixel.

First-generation Pixel drops to $549, Pixel XL to $669 on Google Store

Pixel 2 XL hands-on: Our first look at the second-generation Pixel