In August we heard that Google was following the recent trend and testing a lite version of its Search app aimed at users with slow data connections. Search (Test App) has only been available in Indonesian and Indian markets while being tested, but it was updated to a newer version a couple of days ago, and now it appears to be available in the US for some. 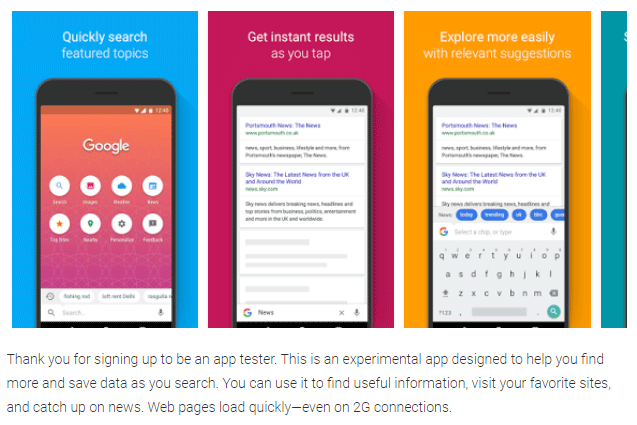 Artem was able to search for it on the Play Store and subsequently install it on his phone, but it still doesn't appear to be available to everyone. As you can see from the first image, Artem appears to be "enrolled in the testing program for this app" but he hasn't signed up for a beta or anything, so go figure. It might be that it was accidentally posted early and has since been taken down. The latest update brought little more than a tweaked layout and a slightly modified widget, but it's obviously not intended to be a fully featured app so that's not surprising.

If you're in the US, give it a go and let us know in the comments if you're able to install it, and if so, what you think about it. If you're not in the US or one of the other testing locations, it's hard luck for now. Hopefully, it won't be long before it's rolled out officially and to more regions. You could install it manually via APKMirror, which I've done here in the UK. After initially failing to connect it now works perfectly fine.

According to commenters it seems the app is also available to some users outside the US, while plenty of the AP staff in the States still can't download the app. There must be a staged rollout going on. If you're still not able to get it, sign up to be a tester first and see if you can install it then.

Mornings are for coffee and contemplation but also for playing 'Stranger Things: The Game'