We saw some Pixel 2 XL pictures from famed leaker @evleaks earlier today, but it turns out he wasn't done. Blass has now released pictures depicting the Pixel 2 in all three color variants, as well as the back of the XL. We're preparing ourselves for some nasty comments about those bezels.

We've seen all three colors before, but not in this much detail. This is the first time we've seen the Pixel 2's face in full, and it's not a very pretty one. The top and bottom bezels are positively enormous, appearing even larger than the current Pixel's. On the plus side, there are two speaker slots up front, though it's entirely possible that Google does what it did with the 5X/6P and only uses the bottom grille as a speaker for the smaller Pixel 2, while giving the XL full dual speaker functionality. 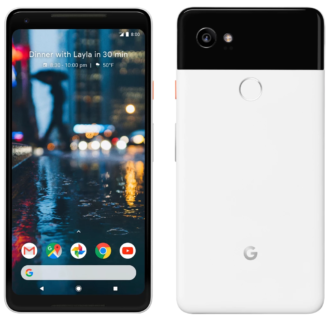 Also present is a picture of the panda-themed Pixel 2 XL's front and back. The orange power button is still there, and it looks as awkward as ever. In spite of that, I think we can all agree that the Pixel 2 XL is a far handsomer device than its smaller sibling.

There's not much more to know about these devices; they'll have Snapdragon 835s, 4GB of RAM, and 64 or 128GB of storage. The Pixel 2 will start at $649, and the Pixel 2 XL at $869. And according to someone familiar with Google's release plans, the Pixel 2 will officially launch on October 19th and the Pixel 2 XL on November 15th, with both preceded by preorder periods. So get ready to wait to get an actual device in your hands.

Android platform distribution for October 2017 includes the first hint of Oreo at 0.2%