A couple of months ago, Cody unearthed in his Android Messages 2.3 teardown hints of the app implementing suggested actions, something akin to Gmail and Inbox's smart replies, but more in line with Allo or Assistant in that it could suggest to share your location or open your calendar and more. The image above is our first glimpse at what one of the possible actions, smart replies, could look like.

You can see from the 3 bubbles that smart replies will look very similar to Gmail/Allo/Inbox. You get the 3 most likely suggestions based on Google's machine learning and you can easily tap one and send it directly or add to it and send.

Cody tells me that at some point in his teardowns, he's seen suggested actions linked to Project Fi, so these might be limited to Fi subscribers although it doesn't make a whole lot of sense. Just to be sure, he tested Messages with his Pixel on Fi and didn't see any of the smart replies, so we're pretty confident this is a limited server-side test and not a full rollout. Let us know if you're seeing the smart replies too, and if so whether you're a Fi subscriber.

Now onto the second change we've spotted. This one is pretty wild. Reader Lukis24 commented on our previous Android Messages post with a couple of screenshots that left us scratching our heads. They show a new interface for attaching things to messages, with horizontal rows in lieu of separate bottom tabs. You can see rows for emojis (probably recent or frequent ones), stickers, image attachments, location sharing, and voice messages. The icons and rows look eerily familiar to me, they remind me of an app or keyboard that had the same interface, though I can't put my finger on it. (If you can help, please leave a comment, this is torturing me.) 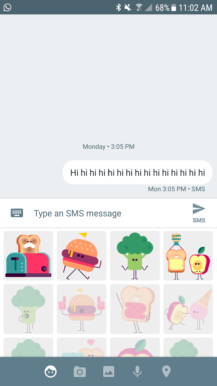 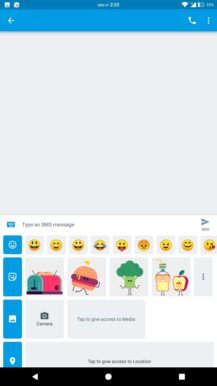 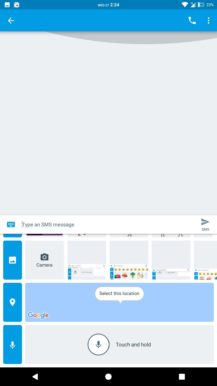 To be honest, we're not sure if this is some kind of mod or mockup or something else. And we've never seen anyone else mention this so we're confused. It does look legit with all the options and permissions, but it's also way more cumbersome than simply using a tabbed interface and giving each type of attachment its own due. So we're sharing this here to ask if you've seen this interface before. Either way, you can leave a comment expressing your honest opinion about what the bloody hell Google could be thinking here.

As pointed out by +Chaitanya K and Prince Javier, the smart replies and vertical attachment interfaces are both shown in this official Android Messages video. We're not sure if that means they're exclusive for users with RCS on their network, but at least we know the design isn't a momentary server-side test.