The Ionic aims to retain all the fitness tracking features that have made Fitbit successful over the years. The watch includes GPS, advanced heart rate monitoring, and sleep tracking. Fitbit says the watch has been tuned to last five days on a charge, which is about four days longer than other smartwatches. It tethers to your phone over Bluetooth to get notifications and calls; there's even support for NFC payments via Fitbit Pay.

App support for the watch might take a while to materialize. The Fitbit SDK launches tomorrow as a developer preview and will include beta firmware for the Ionic. About 1,000 developers have signed up to make apps and watch faces for the Ionic, and Fitbit plans to launch the Fitbit App Gallery at some point this fall. 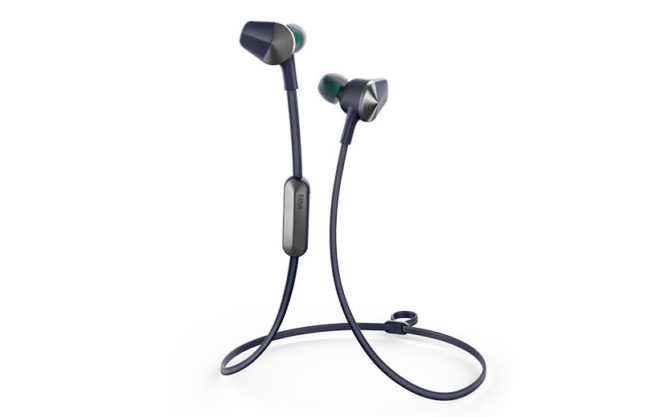 In the meantime, you can pair the new Flyer Bluetooth headphones with the Ionic directly or with your smartphone. These sweat-proof headphones are the first from Fitbit, and they don't adopt the completely wireless design so many companies are doing. The left and right buds are connected, and you get up to six hours of playback per charge.

You can pre-order both products now on Fitbit's website. They will be available at various retailers on launch day as well.

SAN FRANCISCO--(BUSINESS WIRE)--Fitbit (NYSE: FIT), the leading global wearables brand, announced today that its latest products, Fitbit Ionic™ and Fitbit Flyer™, will be available at major retailers worldwide beginning October 1. Following ongoing, extensive testing, Ionic achieves industry-leading battery life of up to 5 days.i Fitbit is also releasing its software development kit (SDK) tomorrow, enabling the 1,000+ developers who have already signed up to support the platform the ability to begin creating apps and clock faces to share with friends and family, and submit for review and availability in the Fitbit App Gallery beginning this Fall.

“We defined the fitness tracker market 10 years ago and look forward to doing the same with the smartwatch category, delivering what consumers want most and have not yet seen in a smartwatch. Ionic offers up to 5 days battery life for 24/7 health tracking and insights, advanced health and fitness features, enhanced heart rate and dynamic sleep tools paired with the smart functionality consumers need on the go to stay in touch and simplify their life,” said James Park, co-founder and CEO of Fitbit. “These features, coupled with Ionic’s broad compatibility across Android, iOS and Windows platforms, means consumers around the globe never need to choose between their watch and their phone.”

The Fitbit SDK, available tomorrow as a Developer Preview, includes the Fitbit OS Developer Beta Firmware for Ionic, the Fitbit Studio development environment, and resources developers need to quickly and easily build and share apps and clock faces with family, friends, or the large, global Fitbit community via the Fitbit App Gallery. In addition to the leading partner apps from Pandora, Starbucks Coffee Company, Strava and Weather, powered by AccuWeather, available on Ionic at launchiii, popular apps expected to be added to the App Gallery this Fall include adidas All Day, Flipboard, GAME GOLF, Nest and Surflineiv along with apps and clock faces created by the developer community.

Fitbit Ionic and Fitbit Flyer will be available in stores worldwide starting October 1 at global retail partners across Asia Pacific, Europe Middle East and Africa (EMEA), Latin America, and North America. Both are currently available for sale on Fitbit.com and at major online retailers.

Additionally, Fitbit Aria 2 Wi-Fi Smart Scale, reengineered for greater accuracy, easy setup and an improved interface, is available for presale on Fitbit.com for $129.95 and will be available on Fitbit.com and at retailers worldwide beginning Fall 2017, including Amazon, Best Buy and Brookstone in North America and select retailers across EMEA and Latin America as well as Australia, New Zealand and Singapore with broader availability in Asia Pacific in 2018.

The new Fitbit Coach personal training app, featuring more than 90 video and audio workouts, will be available on Android, iOS, and Windows devices in October 2017 with introductory pricing of $7.99 per month or $39.99 per year. The first Guided Health Programs will be available in 2018 in the “Coach” section of the Fitbit app.vi

Zoho Cliq is the fun, easy, and feature-packed way for teams to chat and collaborate [Sponsored ...