Fully wireless earbuds are almost certainly the future of in-ear audio. Apple's Airpods, for all the controversy around them, have kicked an entire industry into high gear trying to capitalize on their various shortcomings. One such competitor is Jaybird, now owned by Logitech, whose products we've given high marks in the past, particularly their X series of Bluetooth headphones. Jaybird headphones, though, have been of the wired-wireless variety, using a cable to keep the two earbuds attached to one another. The X2 and X3 were some of our favorite Bluetooth earbuds ever for their comfort, audio quality, and durability - Jaybird did quite a job with them, wire and all.

The RUN are Jaybird's first attempt to do away with the cable completely, and as the name suggests, you're fully expected to be using these in highly active scenarios, something that requires a snug, secure fit. Apple's Airpods have received criticism for their unsealed, just-kind-of-hanging-there design. Jaybird, though, has specifically designed the RUN to stay in your ears no matter what you're doing. And in my opinion, they do.

Of course, that's just one part of the larger product, and the RUN aren't perfect. Even with a truly superb fit, there are some notable drawbacks - Bluetooth performance has been iffy at times, battery life is (as you'd expect) not amazing, and audio is decent, if not exceptional. Read on for the full review. 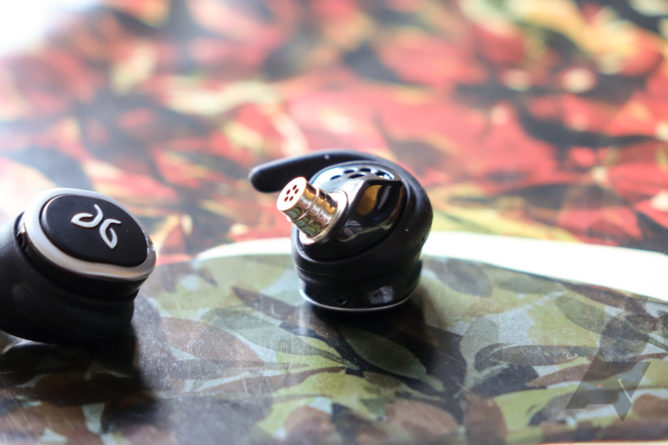 The Jaybird RUN are one of the most comfortable pairs of earbuds I've ever worn, and easily the most comfortable wireless ones. Jaybird has used its signature "wing" design to help keep the RUN secured in your ears, and it works like a champ. It's easy to just pop in the RUN and go - simply push them in and give each bud a little twist to seat the wing into the nook of your ear, and they seal right up. I was honestly floored by just how well the RUN fit me. I know everyone's ears are different, but for me, Jaybird absolutely nailed this. The RUN feel extremely secure in my ears and a seal was easy to get without even trying.

If you don't like "wings" on your headphones, the RUN may not do anything to change your opinion. The fact is, they're necessary - without them, you'd constantly be in danger of losing a headphone, and that would be a major defect on a product ostensibly designed for highly active use (e.g., running). I'm not going to try and change anyone's opinion on the whole wing issue, but these are the best such headphones utilizing this design that I've ever worn.

The lack of a cable between the buds means that there's never anything tugging, pulling, or rubbing, either. The sensation of being totally unencumbered by that wire is real - it would be kind of hard for me to go back to having one.

For fit and comfort, I'd give the RUN the highest of marks. Jaybird really got this right.

Each of the two earbuds also has a physical button (see where the Jaybird logo is), which can be configured - slightly - in the Jaybird app. By default, the right earbud acts as a play/pause button, while the left activates Google Assistant. Alternatively, you can set the left earbud as volume down and the right as volume up. 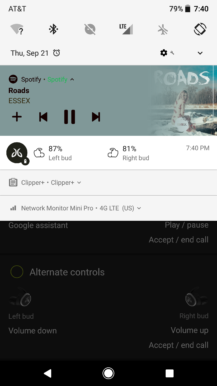 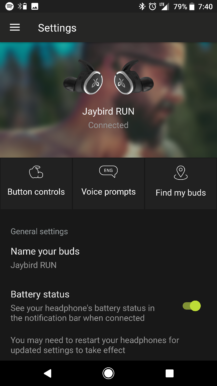 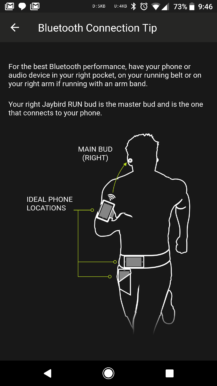 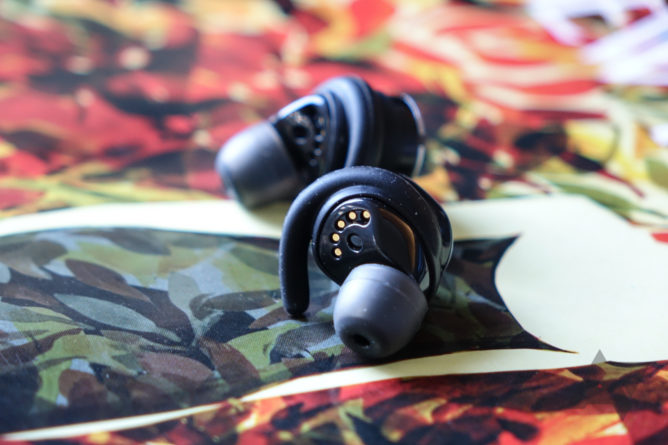 Because the battery has to be housed in the casing of each earbud, there's not a lot of room for the driver in fully wireless headphones. The RUN are no different - these aren't the most powerful Bluetooth earbuds I've tested, nor are they the best-sounding. That said, even compared to the X3, I think the RUN actually compare pretty well from an overall audio quality standpoint, even if they don't get quite as loud.

The RUN have a pretty balanced sound signature, which you can adjust through EQ settings in the official Jaybird app, but I found the default setup was just fine for me. Bass isn't their strong point, and that makes sense - there's just not much space for audio to reverberate in these things. But mids and highs are pretty clean and crisp, if not exceptionally detailed. Overall, I just don't notice the sound signature of the RUN very much, which is probably something of a compliment for a wireless headphone. They're good: not noticeably poor in any regard, even if they're also not exceptional. 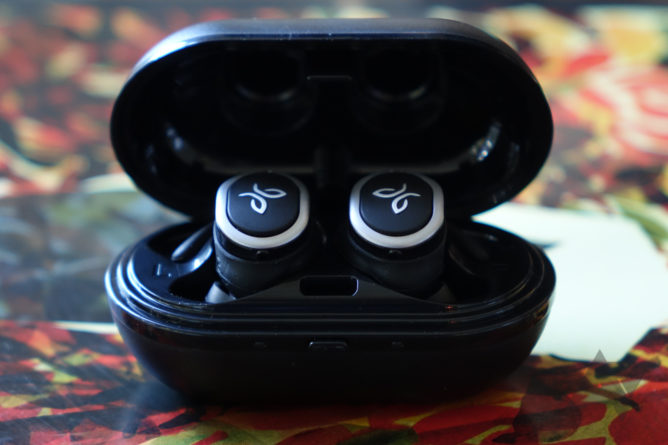 I found the RUN to have connectivity issues with my Pixel XL at times, though using a Galaxy Note8 tended to resolve them. Particularly, audio would cut out from one earbud, especially when my phone was in my pocket. I'm not the only one who has had this issue (Ryan is also testing them), and it's definitely worth noting. That said, the problem almost never occurred when using my Note8, and it was only an issue on the Pixel in certain circumstances. So, I'm blaming the Pixel.

Making sure both buds are powered on is generally not a concern, as you'll almost always be storing them in the charging case (more on that in the next section). Pulling them out of the case powers both earbuds on. However, if you do turn them off and then come back to them later, you'll need to power on each earbud individually and hope that they pair up. Sometimes the RUN would fail to pair to one another when I had to power them back on manually, but turning them off and back on again generally resolved the issue.

And yes, you can use just one earbud should you so desire - but only the right one. The left is just a "slave" device and won't function on its own. 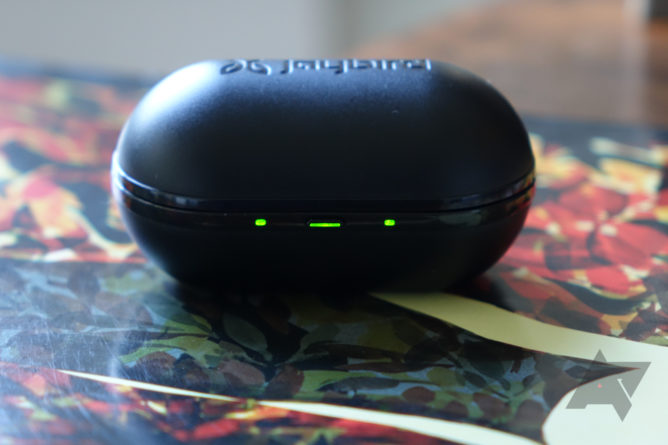 Here's where things get predictably subpar: battery life on fully wireless earbuds just isn't fantastic. Jaybird rates the RUN at around 4 hours of playback time. My experience is more like 2.5 to 3. Of course, this is going to be heavily dependent on the volume level you're listening at, and I have no doubt Jaybird's figure is accurate for modest outputs. But if you crank them, expect the RUN to get run down pretty rapidly.

You can use the Jaybird app to monitor the battery level of the earbuds directly from your notification bar, which is nice, and it even shows the battery level for each side. The "master" right earbud, as you might guess, drains more quickly than the left one. 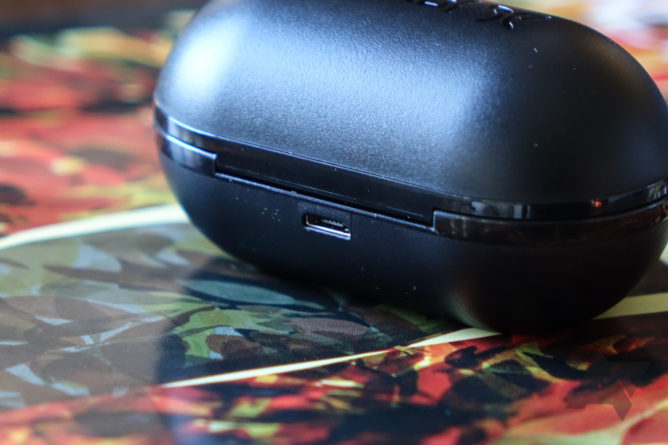 The case charges via microUSB, and the built-in battery can fully recharge the RUNs from empty twice.

Charging is achieved via the included battery case, which has enough capacity to fully recharge the RUN twice before itself needing to be charged. And yep, it uses a microUSB port - no USB-C for our audio accessories just yet, sadly. Charging is at least rapid; Jaybird says you'll get an hour of listening time after 10 minutes of charging if you're filling them up from empty, though I wasn't able to measure how long a 0 to 100 charge took.

The case itself is about the size of a prescription pill bottle, meaning it's too thick to really pocket, which is kind of a shame. But it will keep your RUN nice and protected while they juice up (and don't get lost). Seating the earbuds in the case is simple, and I don't think there's any way you could position them such that the contacts don't line up, which is nice. 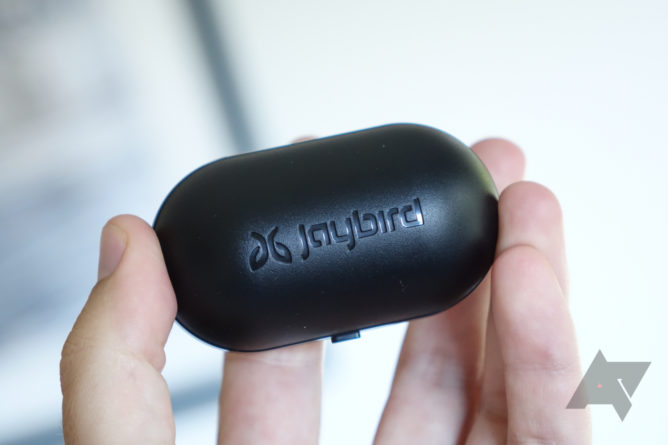 With the girth of a prescription pill bottle, the charging case is just a little too big to pocket.

The Jaybird RUN are, if you ask me, an excellent first effort at a truly wireless earbud. Getting the fit right is so important, and Jaybird hit a homerun - at least for my ears - on their first at-bat. Sound quality is respectable, battery life is understandably meh, and overall connectivity performance was never enough of an issue for me to be truly annoyed.

As such, I do recommend the RUN - provided you think they're worth $180. That's a lot of money for Bluetooth earbuds, and I can understand why many people just wouldn't want to spend so much on wireless headphones. Especially ones that you could rather easily lose.

But, as such products go, the RUN seem well-thought-out and designed, and they come from a company that has consistently made excellent active-oriented personal audio gear. I'm awarding the RUN our "Most Wanted" pick, because really, this isn't an easy product to get right, especially on the first try. They're not perfect, but I'd have no reservations pointing a friend or family member to these before I would the Airpods - the more secure fit eliminates the greatest anxiety around fully wireless earbuds, and most people would think they sound great. And, in what is perhaps the greatest benefit of all, no one is going to confuse them for actual Airpods. 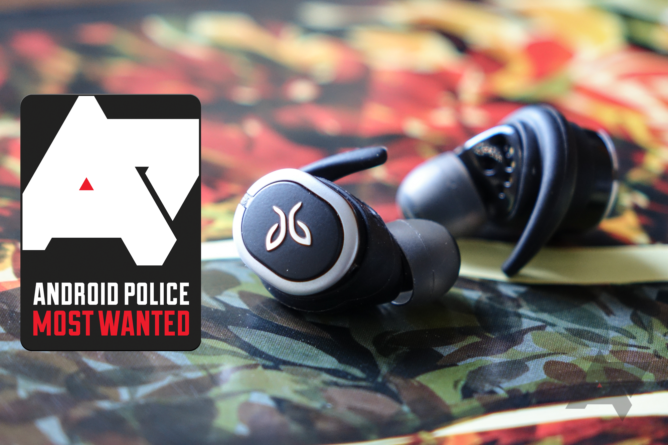 AnyTrans migrates your data from Android to iOS better than Apple's own transfer tool ...

Accidental Queens' 'A Normal Lost Phone' was an awesome game, and now there's a sequel