The BlackBerry Krypton has been popping up on the rumor mill for a few months, but today we get our first look at what could be the device's back. As you can see from the image above, it has a carbon fiber patterned backside with a shiny BlackBerry logo. The camera has one LED flash though, as opposed to the dual LED on the KEYone.

According to previous rumors and leaks, the Krypton will be the DTEK50/60's successor with a fullscreen display and no QWERTY, unlike the KEYone. It should have a 16:9 1920 × 1080 display, a Snapdragon 625 or 626, 4GB of RAM, a fingerprint reader integrated in the home button, and a rather large 4,000mAh battery. To go with its badass name, the Krypton should also be IP67-rated. 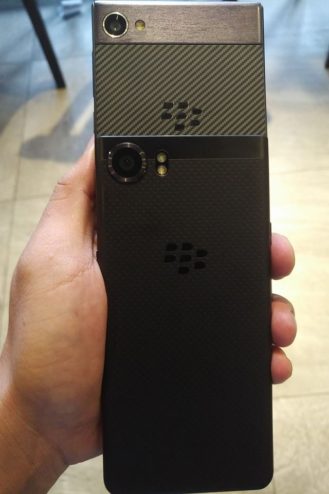 If you also believe case makers on Alibaba, the Krypton seems to have all its buttons including the Convenience Key on the same side, and the speaker, USB-C, and 3.5mm port on the bottom.

The Krypton is expected to be available in October with a retail price of $499, which is a little on the high side for these specs, in my opinion. Given the imminent date, I bet we'll be hearing more about it in the coming days and weeks.

Amazon Fire TV's OS 5.2.6 lets you use voice dictation when the keyboard is open