FLIR's name is essentially synonymous with thermal cameras from cheap mobile sensors all the way up to industrial and military applications. The company first got into mobile devices with an iPhone-specific camera case and later a dongle. FLIR One came to Android a few years ago with a microUSB-equipped version, but that was right at the dawn of USB Type-C. Consequently, that first camera became obsolete quickly. Now there's a new FLIR One, actually two of them. The third-gen FLIR One costs $199 and the FLIR One Pro will run you $399.

Like past devices in the FLIR One family, these cameras use a pair of sensors and FLIR's MSX technology to produce thermal images that are easier to decipher. The new Type-C connector allows the camera to work on most modern Android devices, and you can even adjust the fit to work with your case. The FLIR One Pro I've been testing is undeniably cool, but it's a tough sell at $400. That said, the cheaper FLIR One might be a good value (despite a buggy app) for keeping a heat-sensitive eye on things around the home.

The FLIR One and FLIR One Pro are self-contained dongles that connect to your phone's Type-C port. They have batteries, so you have to remember to charge them before use, but that means they won't cut down on your phone's battery life. The camera charges over Type-C, though, which is a relief. So many accessories are still using microUSB, but FLIR is all in on Type-C. 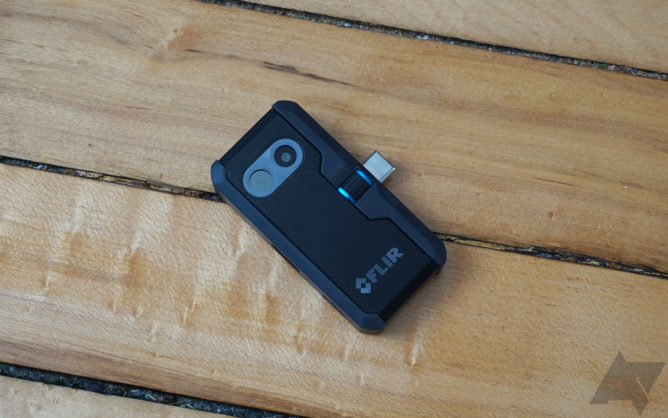 There are two sensors on the third-gen FLIR one and FLIR One Pro, but the setup differs slightly. The resolution of FLIR's Lepton therm sensor is 90x60 pixel on the FLIR One. The FLIR One Pro jumps up to 160x120 for a much more crisp representation of an object's thermal properties. These are both obviously much smaller than the 1440x1080 JPEG files exported by the FLIR app. The thermal data is overlaid with the signal from the standard RGB sensor, which adds edges to the image. Rather than multicolored blobs, you can see the shape of objects along with the heat signature. 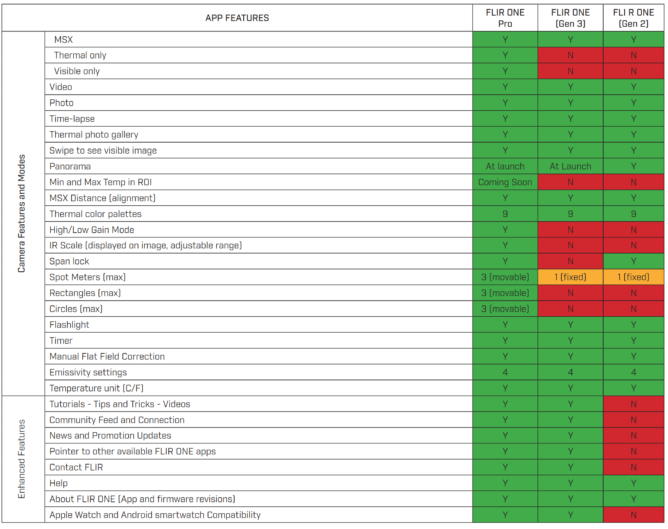 In addition to the resolution differences, there are some capabilities that only work on the more powerful (and expensive) pro version of the camera. For example, you can read the temperature in multiple locations and flip over to low gain mode. The latter lets the pro camera read temperatures as high as 752 degrees Fahrenheit (400 C), versus just 248 degrees F (120 degrees Celsius) for the regular camera. FLIR also says the Pro camera has more effective "VividIR" post-processing technology to make images clearer.

Using the FLIR One Pro

The version of the camera I've been testing is the Pro, so all my observations (and sample images) are based on that. One of the coolest things about this camera is the telescoping connector, which is included on both the Pro and regular version. It's Type-C, but the entire connector telescopes out of the housing with the turn of a dial on the camera. Thus, the FLIR One can adjust to fit your phone even if you've got a bulky case. No case? Shorten the connector to get the body of the camera right up against the phone for added stability. 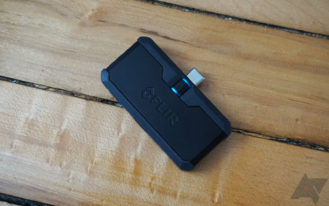 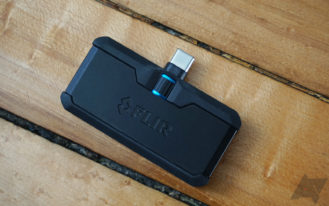 Above right: The USB port extended.

The FLIR One Pro has a ruggedized design with rubber bumpers on the top and bottom. On the bottom edge is the Type-C input for charging and a power button. The camera doesn't fast charge at all, maxing out at about 5W. So, make sure to give it plenty of time to charge before you need it. FLIR says the battery is good for an hour, but that seems optimistic. I'm seeing roughly 45 minutes of use on a charge, and that's about how long it takes to fill the battery back up. 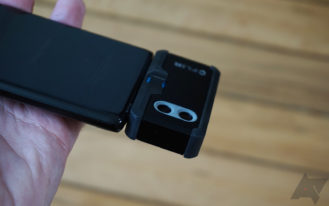 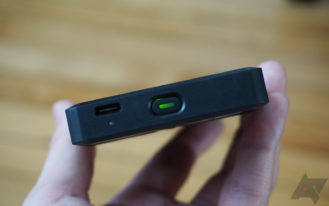 The hardware is solid, but I'm less pleased with FLIR's Android app. It's sluggish and surprisingly buggy after all this time. It got a complete revamp for the third-gen camera launch, but it still just crashes and fails to load the camera UI sometimes. When the camera only has an hour of battery life, I really can't abide by troublesome apps. Ideally, you should be able to plug the camera in, press the button, and have the camera viewfinder launch immediately. In reality, sometimes you need to force close the app to make it recognize the camera.

When the camera is up and running, the viewfinder makes a ton of tools available without digging into menus. Some of them probably should be in a menu to cut down on the clutter, though. The framerate of the viewfinder is painfully slow, but this is a limitation imposed on FLIR by the government. You need a special export license for thermal camera systems that operate at higher than 9fps. So, the video on the FLIR One is intentionally crippled.

On the top edge (landscape) is a settings toolbar that you can pop out to adjust settings like the color filter, gain mode, and parallax. That last one is important as the image from the lenses won't necessarily line up correctly at all distances. This is something that was missing from the previous FLIR One, but the Cat S60 phone had it in the camera app. I'm happy to see it included in the updated standalone FLIR app. It's a pain to adjust, but your images end up looking much nicer at medium distances with all the edges lined up correctly. Alignment is still a bit off at long distances, though. The Pro camera also includes an option in this toolbar to flip from MSX mode to pure RGB or pure thermal. I don't think there's any practical use for this; it's just showing off. Still images look solid to me (see above for a gallery). While the resolution isn't high, you get good thermal detail. The edges from MSX make areas of uniform color recognizable, whereas they're just colorful smears without MSX. However, adding temperature measurements to the live image is awkward. The UI for this never rotates with the screen, making the menu hard to read. The Pro supports up to three point measurements, plus rectangular and circle area measurements. I recommend not bothering with more than one point measurement in the live view—just snap a photo. These are radiometric files, meaning they include all the temperature metadata. The gallery in the FLIR app lets you edit them after the fact to change the filter and temperature measurements. The saved image can be shared as a regular JPEG to other apps.

Finding a compelling use case for FLIR's cameras is a bit of a challenge. You can use it to check for shorted wires, identify clogged pipes, and even find a lost pet in the dark. I actually used the old FLIR One to find a leak in my roof after a particularly bad storm last year. These aren't things that come up a lot, though. Most people will probably just use the FLIR One to take cool thermal pics. 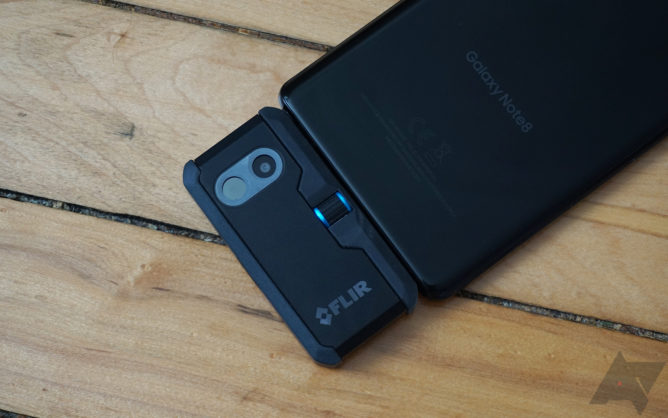 It's hard to justify the Pro version of the camera for $400 when the regular one does most things almost as well. At $200 ($50 less than the old FLIR One), you can probably make the case that it's a cool toy you might someday be happy to have when a storm blows in. The FLIR Pro could be a good purchase for professionals in construction or related fields—it's cheaper and a bit more capable than some standalone professional thermal cameras.

ASUS' new Chromebook Flip C101, a 10" convertible with Android apps, can now be pre-ordered for $299