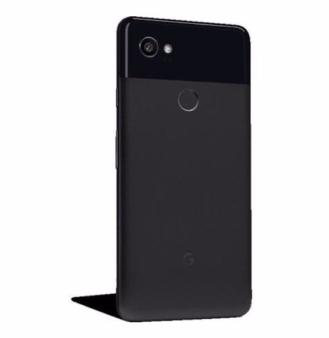 Appearance-wise, the Pixel 2 XL looks pretty sharp. It'll come in two colors: "Just Black" and "Black & White." As we'd suspected, the camera lens is positioned inside the glass window, while the fingerprint sensor sits within the metal portion. Our positioning of the camera and flash was slightly off, but it's important to remember that we gave the render an 8/10 score.

We only have pictures of the backs, but the Black & White model brings back the beloved panda look from the Nexus 5 and Nexus 6P. There's an orange power button on the Black & White color, which seems like an odd addition from this picture alone, but I wouldn't be surprised to see some orange accents on the front of the phone as well to go with it. The Just Black model has a regular, black power button. We also get the now-familiar "G" logo near the bottom.

When the Pixel 2 and Pixel 2 XL debut on October 4th, you'll be able to find them on the Google Store here.