There are a number of good reasons people haven't been that enamored by Allo since Google released it, not least that the company simply has too many messaging apps. One of the biggest issues at launch was the lack of a desktop or web client. How else could we get away with chatting to each other while at work without our boss finding out? That was rectified last month with the introduction of Allo for web, but it still lacked a few features from the app. A couple more of those have just made their way on to the web version.

As a WhatsApp user, I can say the lack of a web client has definitely stopped me adopting Allo more widely, other than to test it out. That's a shame because there's a lot I like about it. Google seems intent on slowly building up the functionality of the web app, though. With the latest update, we can now shout and whisper by clicking and holding on the send button and dragging up or down, just like we've always been able to in the app. The usefulness of that is debatable – I tend to do it more by accident when I hit send than intentionally – but it's good to see the feature set reproduced. 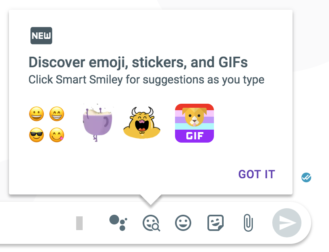 The other new addition is called Smart Smiley, which is the little 'emoji with a magnifying glass' icon you see in the options next to the send button. While Allo already offers contextual emoji suggestions right below the last message, clicking this button gives you yet more suggestions for emojis, plus stickers and GIFs, too. So you can type a search query directly into the message box and hit the Smart Smiley button to get a bunch of options. It's pretty neat, and now you can do it on the web as well as in the app.

You can access Allo for web by visiting allo.google.com/web and signing into your account by scanning a QR code with the Allo app on your phone. Now all you have to do is persuade your friends to switch over from [insert name here] and actually use Allo with you. Best of luck with that.